By way of direct contrast [see previous review], the next piece in the Mladinsko repertoire showcase, was a co-production with the Prešernovem theatre in Kranj. Now, Ljubljana is probably the quietest, prettiest, most unspoilt capital city in Europe, but the little town of Kranj, about twenty-five minutes outside Ljubljana is something else entirely. We arrived early into what looked reliably like the town centre. There was, after all, the theatre, a massive church, and some sort of square. All heart-breakingly lovely, and all almost completely empty and quiet. Look, I took photos. 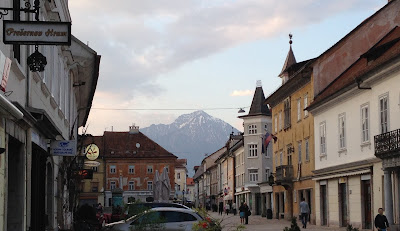 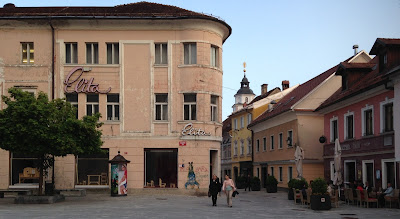 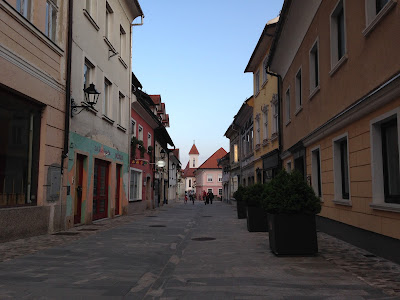 So that’s where we are. Now, believe it or not, all this formed an ideal backdrop to *getting* Butnskala. Emil Filipčič and Marko Derganc's Butnskala started life as a radio play in 1979(?). It has subsequently – much more recently – been turned into a graphic novel. And now it’s on stage, directed by Vito Taufer.

This information about it starting life as a radio play also felt crucial to finally “getting” the thing. And we didn’t learn it until the interval. Up to that point, I’d definitely been *enjoying myself*; the allegorical story is easily entertaining enough just to keep you engaged, but I had previously been quite surprised by the entirely *straight* treatment. Much more like something you’d see Michael Grandage do with Shakespeare (but not boring) than the overtly art theatre I was more used to seeing in Slovenia.

But, no. When you get that it’s an adaptation of a late seventies radio series (and graphic novel), then it all falls into place. The Pythonesque/Goon Show/Hitchhiker's Guide... humour, the dialogue, the incredibly unlikely antics... (I mean, bear in mind until the interval, I’d been watching not even knowing when it had been written, whether it was an updated production of a classic, anything...)

So, the basic plot of Butnskala is that a musician, Ervin Kralj (Matija Vastl), down on his luck and contemplating suicide. A professor (Blaž Šef) advises him to go up the mountain and chat to the people up there. (I think?) Either way, Kralj meets the people up the mountain. They’re a large community and they meet up their to run fast, head-first, into a special boulder they’ve got up there...

I mean, it’s such a simple allegory it’s brilliant. The group are pretty hardline, or fundamentalist, about running headlong into a rock. They have a spiritual leader, who leads them in appreciations of the joys of slamming head first into a massive stone (and who remains noticeably free from running into anything hard himself). In fact, the first parallel I thought, before I knew it was a radio play from late-seventies Yugoslavia of was with People, Places & Things. There was something oddly similar about the set-up of misfit amongst fanatics (fanatics trying to help themselves, at that). Here, however, the allegory is that bit more on-the-nose. I mean, it’s about people trying to achieve peace and subsequent dominance by bashing their heads against a rock. It couldn’t spell it out any more, could it?

After this set-up, the narrative gets a lot more specific. There’s a rise to power, a rival faction, suspected double-agents/spies, and ultimately a violent power-grab but the head-against-rock gang. Without ever specifically saying which period, or which country, the story speaks pretty clearly to almost any cynical view of revolutionary and post-revolutionary politics. Think also: the relevant strand of Chris Thorpe’s There Has Possibly Been An Incident. Of course, being *a comedy* the brutality is massively underplayed – but still omnipresent. Not knowing the genre or what might happen *at all* is really exciting. As it turns out, the violence never gets amped-up to make a point, but even feeling it could is effective.

After the interval, there’s a *really long* extended skit on State Entertainment, which *I think* includes some very fine pastiches of Slovenian counter-culture from the seventies. There’s a punk band (one of the best-sounding ones I’ve ever seen in theatre), and an incredibly good take-off of Scipion Nasice Sisters (the theatre bit of NSK), and some other stuff I couldn’t begin to tell you was satire or just fun. But, again (as with ÜberŠkrip before it) it’s primarily great just because of the lovely relation established between music, performance, satire and the main narrative. I love the idea of taking twenty minutes out of a show just to hold a mini- satirical – concert/gig.

So, yes. I won’t wring out the rest of the plot details, suffice it to say that the story has a pleasingly familiar shape to it, and you get all the satisfactions of a “proper story” from it, with added bite, and historical interest. What was most interesting to me, though, watching this deeply strange, absurdist play in a tiny town in Slovenia was getting the faintest hint of what it must have been like hearing it in somewhere like Kranj on the radio back in 70s Yugoslavia. To be fair, Slovenia hardly wanted for subversion – indeed, the only art I know about from pre-independence Slovenia is the subversive stuff, and there’s a lot of it – but, even so, Butnskala feels like a powerful reminder that art isn’t just useful when it’s trying to change things, it’s also incredibly good at just being a beacon for discontent and cynicism. And that the value of something silly and snarky cheering everybody up when things aren’t great is fondly remembered. Even when it first happened nearly 40 years ago.  That the piece still resonates astonishingly clearly today also suggests that  Filipčič and Derganc may have also tapped some far more enduring truths about how societies malfunction. 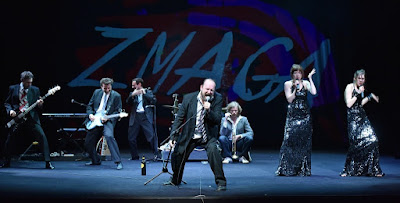