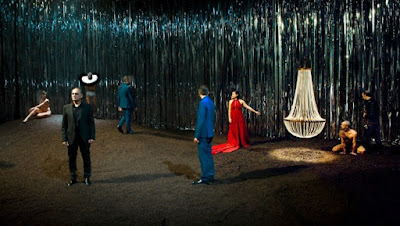 I went into The Public knowing nothing. Not the name of the play, not who it was by. Nothing. Maybe the nationality of the company performing; that’s it.

Which in many ways was not ideal. But in other ways, it turned out to be strangely perfect.

Teatro de La Abadía and the National Theatre of Catalonia were performing in Spanish, with Hungarian surtitles. And Lorca’s play makes little, if any, literal or linear sense even in English (from what I can gather, I’ve still to track down a copy).

So what did I see?

There’s curtain of foil strips round the small studio stage. It is piled high with wood-chips or gravel. Two chandeliers hang over the front of the audience, and another to the far right of the stage. Musicians mostly hidden behind the curtain play music. Two performers come in with a card and an old cine-reel is projected onto it. Maybe news, maybe Spanish. Some performers come on in uniforms? Three performers – two male, one female – enter fully naked. A bloke comes on in his white y-fronts and a massive Elizabethan ruff on. Another bloke turns up with a massive Elizabethan ruff around his waist. A woman comes on in shorts and bra-top and is all over one of the naked blokes. Two clothed performers have a fight? Two other clothed performers have a relationship-argument, or maybe a passionate declaration of some sort. They have names, too, many of them from Shakespeare.

By the end, I’d decided I really liked it.

It’s clearly “about” theatre. And about relationships between people. And then about theatre some more. And I thought it was a pretty compelling production.

Also: it seems like a REALLY INTERESTING TEXT. I dunno if it would actually turn out to be less interesting if you knew what everyone was saying – apparently it’s *poetic*, which is always harder to really translate, even if you can approximate the meaning, the actual point of it, the poetry, seems to fall apart. But, yes, on this showing, this seems to be a piece we need to rediscover?

[More as and when I finally read the play...] 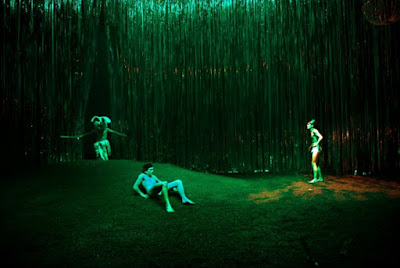