Assuming this review is going to be a bit spoilery, I’d advise you to go DEFINITELY GO AND SEE THIS knowing only what I did: Fat Man is a new one-man version of the Orpheus myth, and if that doesn’t grab you as a concept (which it didn’t me, very much), then just accept that this is extremely intelligently and elegantly done and buy that ticket anyway. Rest of review under picture. 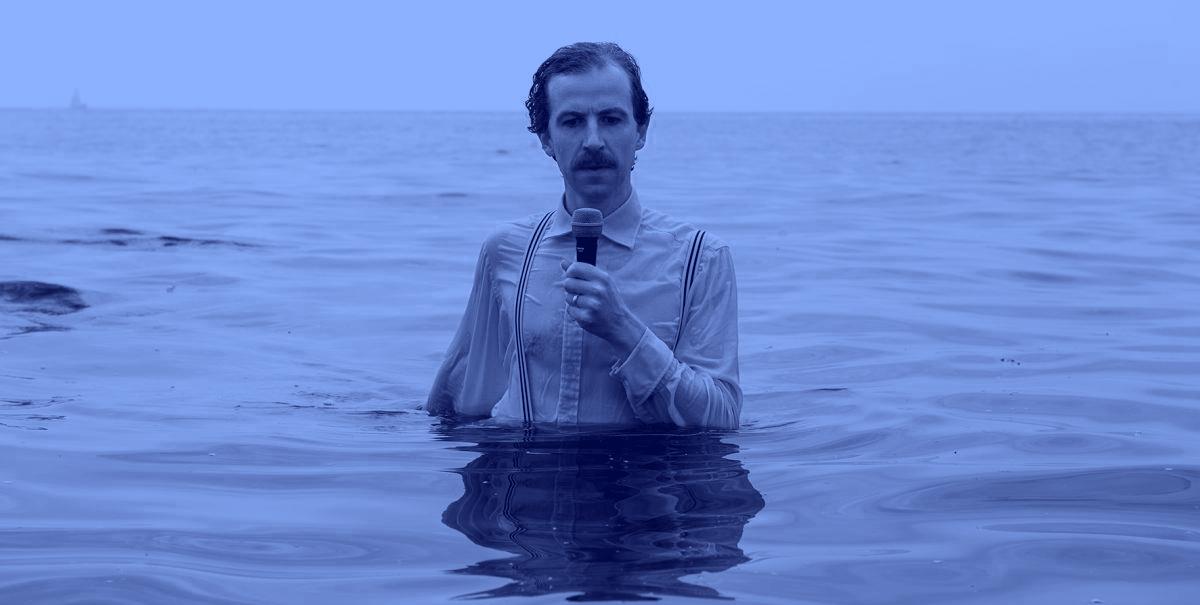 How often do you get to see a “one-man-show” that truly feels like an ensemble piece? Writer and performer Martin Bonger’s Fat Man is one such. Given that it’s performed on an almost empty stage, even the simple fact that it feels brilliantly designed (Harriet De Winton), lit (Paul O’Shaughnessy), and soundscaped (Philippe Nash) feels like a major breakthrough. I thought the hand of director Alex Swift – best known for Caroline Horton’s Mess – was also very much in evidence. That, or he and Bonger have uncannily similar post-clown, John-Wright-at-his-best mindsets, and make for a brilliant collaborative pairing (both, probably, thinking about it).

The piece is a modern version of the Orpheus myth, told, at first, as self-deprecating, self-loathing, failing stand-up; where we, the audience, are cast as the gods of Olympus. It’s a great conceit: this brilliant, famed musician filling obligatory club-slots with bitter tirades,, having retired from music because of bereavement. The show travels through his relating the story again. It feels as if he does this every night. And maybe even that every night the gods return in the hope he won’t. Imagine Bill Hicks doomed to an eternity in a Samuel Beckett afterlife and you might be in the right sort of zone.

You might think you know the Orpheus myth, but Fat Man does a brilliant job of really thinking it all through, unpacking it, and making you hear it all again new-minted. All the more bitterly for you already knowing the ending. And why Orpheus can’t stop drinking. Or comfort-eating. Or talking. There are pretty much all the stages of grief jumbled around together: bargaining, anger, disbelief. Pretty much everything except acceptance. And, *of course* acceptance is hardest. It’s his fault that Eurydice is dead, now. Not his fault she died, no. Not at all. But his fault for failing to bring her back from the dead, right? As it turns out, this last bit is subtly altered to create Fat Man’s biggest coup. I don’t want to give too much away, but suffice it to say that Bonger manages to suddenly up-end the hitherto abject lack of female agency in the myth, and does so with a sequence that is quietly, unshowily, hauntingly beautiful, and game-changing in terms of the dramatic trajectory.

All this, and the fact that the piece as a whole gently reflects on themes of loss, and love, and heartbreak in such subtle-but-suggestive and heartfelt way, means you (well, I) come out of the show feeling, well, “usefully bruised” is the best way I can think of putting it. You think about all those losses of your own, and this guy’s loss, and about the cruel jokes that fate plays on you, and somehow, from somewhere – I’d say probably from the sheer talent and artistry on display in the making of the piece as much as anything – you somehow don’t feel crushed by the experience, but rather moved, a bit emotional, and ultimately “uplifted”. [As you can see, I’m perhaps not at my most emotionally literate yet this morning. Blame the early start and the train I’m writing on. But, yes: “people with *feelings*, will love this show about *feelings*.” Jesus, this is pitiful, get a grip, Haydon.]

What’s also brilliant here is *the writing*. In common with the stand-up form that it so lovingly pastiches (although, if something *pretending* to be stand-up in a “theatrical context” is still funny, is it not also still stand-up? I honestly don’t know) it’s hard to think of it as *writing*. But this is great writing. Lovely phrases just chucked about and away as if the sodding things grew everywhere. Although I was already completely won over in the first five minutes when I coughed at the end of a joke and Bonger, without missing a beat, said: “Thanks. I’ll take that as a laugh”. Brilliant, even if pre-prepared.

And, yeah, the delivery, totally natural-as-stand-up; which is, perversely, not really a very natural anything. So, yes: really interesting stage set-up all round. Noticeably beautifully lit. Definitely intelligently scored. Put together minimally by a designer who plainly understands how space works, and directed and written/performed (respectively) by a duo with an instinctive feel for the myriad virtues of theatre as the most live of media. Essentially a beautiful example of theatre’s alchemical ability to create a fully-realised, vivid world in your head with only the barest of means.
Posted by Andrew Haydon at 13:50