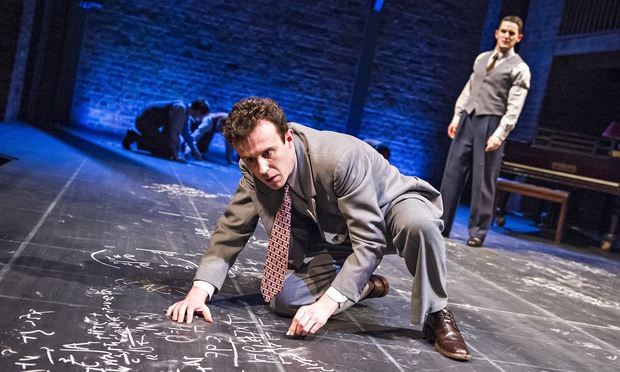 Tom Morton-Smith’s Oppenheimer is a blow-by-blow dramatisation of J. Robert Oppenheimer’s Wikipedia entry, staged by Angus Jackson as a scathing satire on contemporary productions of Shakespeare. The main reason I booked to see it was because Matt Trueman swore blind to me that it was really good and important (with a side order of my never having been to Stratford before). But, having seen it, I’m puzzled why anyone thinks this sort of thing should be put on stage at all.

I get that thanks to Morton-Smith’s deployment of often heightened language, this exact script would probably seem very odd if it were used as the basis for a straight biopic film/TV movie. At the same time, the language that has been heightened is still ordinary language. And it hasn’t been versified, as it is in Bartlett’s King Charles III, so it still feels incredibly strange when everyone strides around in the Swan bellowing it. More than this, Jackson has not one drop of Rupert Goold’s native theatrical panache (nor in this instance is Robert Innes Hopkins’s design a patch on Tom Scutt’s). While, if KCIII could be accused of anything, it would be of being too clever, no one is going to accuse Jackson of seeming like he’s interrogated any of the problems at all.

The biggest problem aesthetically is the Swan Theatre itself. Putting Oppenheimer in there is a bit like putting a play about Thomas Edison in the Sam Wanamaker. Put simply, the entire theatre it made out of heritage and wood. The two elements least associated with the invention of the atom bomb. For a short while, it seems like Jackson has acknowledged this, and the large company of white men do scribbling on the floor in chalk, like a lo-fi Curious Incident (see above). BUT THEN THEY GO AND USE VIDEO PROJECTIONS ANYWAY. This sort of inconsistency serves as a perfect example of problems of the whole.

The next biggest problem is the stoppy-starty, *every damn incident* dramatisation. Richard II was the King of England for twelve years, this play covers only the years 1939-1946. That comparison should perhaps have been pointed out to Morton-Smith, because, while I’ll accept this is a play for the stage linguistically, in terms of it’s structure it owes more to Olivier Stone’s The Doors, in which structure is dictated by Jim Morrison wandering around doing daft things and Stone slavishly recording pretty much every one of them. And, my God does it drag. The actual stage-time of this play is only 2hrs30 – the same as Ostemeier’s Hedda Gabler and shorter than Nübling’s Three Kingdoms, two of the shortest-feeling nights I’ve spent in the theatre. Even Frayn’s elegant Copenhagen might also have been an instructive example. Yes, there’s a bit of momentum, and the play raises some questions, but OPPENHEIMER INVENTED THE ATOM BOMB. *Of course* there’s momentum and a complex moral dimension. But that’s where the script stops: events – one thing after another – until a lot of talking has happened and the bomb goes off. Leadenly given the outward appearance of pace with the deploymment of that most hackneyed Shakespeare staging trick of people coming on quickly talking while other people walk off quickly talking.

Then there’s the overwhelming male whiteness of the whole thing. To be fair to Morton-Smith, he shares his company with a production of Thomas Dekker’s early modern silliness The Shoemaker’s Holiday. And we all know that the pre-Restoration C17th stage didn’t even have real women on it at all, and that at the time apparently everyone in England was white. And this company hasn’t gone in for colour- or gender- blind casting. And, well, WWII America was still an institutionally, legislatively racist country (lest we forget). And, maybe sitting in the middle of the UKIP wet-dream that is Stratford-on-Avon and being forced to watch a bunch of white people plot the murder and mutilation of hundreds of thousands of Japanese civilians, well, maybe that’s the biggest moral problem the play offers us. Also, being fair to Morton-Smith, he does try to do as much with the women as a biopic about Men Doing Science allows. Oppenheimer has two whole girlfriends, and at least one of whom is granted a bit of an interior life (but then has to kill herself, because women with opinions seldom fare well, right?). And there’s a librarian lady at the Manhattan Project who isn’t allowed to watch the bomb go off, because sexist America. So, y’know, it is addressed. (By Tom, and Angus, and Robert, hem hem).

The performances also vary wildly. I’m not going to attempt to deny that John Heffernan is a fine, fine actor, but his version of Oppenheimer felt somehow too absent and like a void at the centre of the story to really register as a performance as such. Of course *really* that’s a tremendous skill. And, yes, the actual story of what’s going on in the six years depicted means that you find yourself watching the politics and the ethical problems much more than The Man. But even so, it didn’t do to me what great, empathetic performances do. Or else, Heffernan has judged Oppenheimer, and also condemned him. I find this option far more appealling. I think Morton-Smith has too. But maybe this condemnation itself is a problem for the drama.

William Ganimara turns in far and away the best performance of the show in his small role as the Army commander in charge of the Manhattan Project. And Catherine Steadman is still brilliant as Oppenheimer’s first girlfriend, although it is sad to see her so sidelined after her incredibly powerful performance in That Face. Much of the rest of the ensemble (mostly the ones (needlessly) doing American accents) seem preposterously young, and not very focussed at all. Jackson should maybe head off to Katie Mitchell bootcamp to learn how to make an ensemble intense rather than sluggish and borderline resentful for having to even be there. (I mean, I sympathise; I resented it too. But once we’re all in the building anyway...)

So, yes, it’s a play that combines the personal and the political, which is apparently the extent of some critics and playwrights ambitions for theatre. (I’d be intrigued to see someone write a play about a man who hung out with communists, lived at all, and also invented the atom bomb that managed to side-step those two elements.) OF COURSE it’s personal and political. Everything is. One might as well demand plays in which the characters breathe. Does it mesh those two things convincingly, or even at all? Beyond the realms of recorded facts (“Oppie, the FBI have tapped my phone because I’m a communist, darling!”): not really. While clearly fallen on with much love by Billington and Edgar as a new example of their favourite sort of play; judged on its own terms, rather than as a symbolic victory of commissioning, it needs a good few more drafts and a far, far better production before it achieves anything even approaching the full potential of its form.

Perhaps the greatest achievement of the play is the time it gives us to contemplate that (Western) history is written as if we were not only the victors, but also the moral superiors. The obscenity of Nazi Germany is, of course, indisputable. And Stalin’s murderous regime in the USSR: the facts speak for themselves. And yet, here is America starting the arms race, guaranteeing the unstable global future we still live in, and inflicting unimaginable suffering on Japan, being presented as a kind of question. Or perhaps, presented as a noble tragedy of fait accompli. The fact of America’s racist society and Britain’s near-genocidal empire are both entirely ignored. It still feels as if “us” getting the bomb first is – if there has to be a bomb at all – the best result. No consideration is really given to the fact that if another side had got the bomb first, we’d still think *that* was the best result, because in all probability they’d have been the ones teaching our parents and grandparents history. For a play in which there is so much paranoia about “treachery”, there’s very little asking us what there was to betray exactly. No real nitty-gritty examination of our unshakeable belief that we are the good guys. But perhaps it is these voids that are intended to be the point.
____

[also, note to photographer: a jaunty angle does not a leaden staging disguise.] 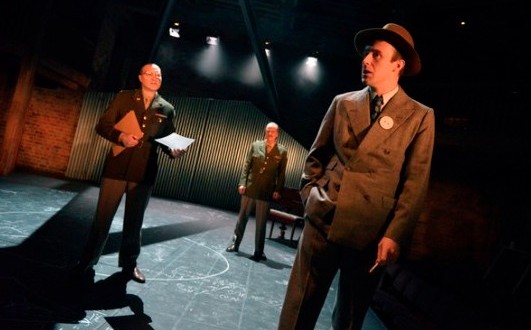 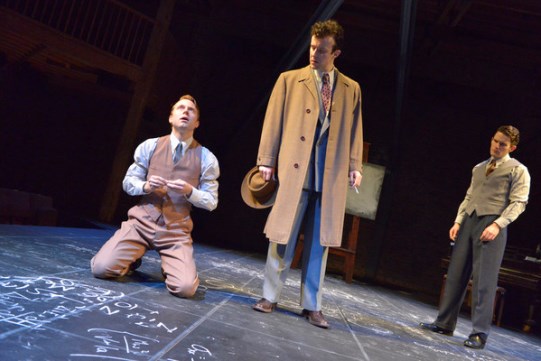 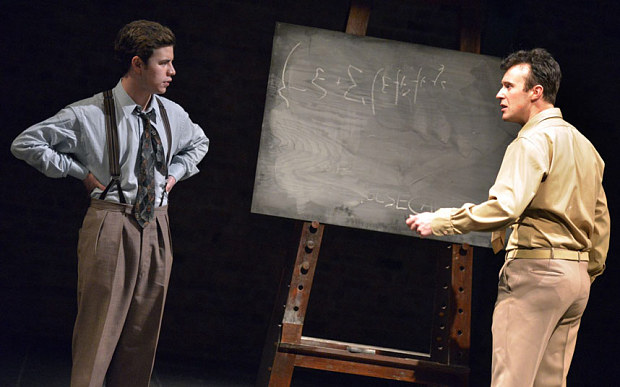