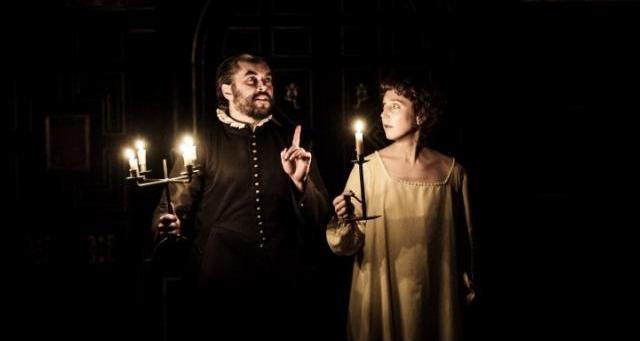 Leafing through the programme for Globe Artistic Director Dominic Dromgoole’s production of The Changeling before going in, one line leapt out at me, and I think ended up colouring the entire way I responded to the evening: “When [The Changeling] was registered for publication... it was registered as a comedy” (there’s then a column break). So this was the thought to which I kept returning throughout.

Middleton and Rowley’s1622 text in Dominic Dromgoole’s production is played about as “properly” as is imaginable. Fans of that essay, which inveighed heavily against such practices, might want to look away from the rest of this review. Because, to be honest, while Dromgoole’s production has absolutely no *take* on the play, as such (obviously impossible), the way in which it *seems* to be at pains to avoid *interpretation* a) ends up giving us an incredibly clear index of the director’s (or ensemble’s) concerns, and b) still allows us to imagine more radical or different readings on top of it.

Beyond that, what did keep almost leaping out at me was the extent to which what seemed to be being putatively offered as a not-very-tragic, but definitely bloody tragedy really could be played even more broadly as a straight-up comedy. And a very funny one at that. It’s interesting to notice that there’s a sort of English tone of voice, especially on stage (and on Radio 4) that pretty much signals that *comedy is being done*. That isn’t used in the climatic scenes here – where Beatrice-Joanna (Hattie Morahan) is finally discovered to have commissioned the murder of her arranged fiancé and then her maid in order that she can marry the man of her dreams, Alsemero (Simon Harrison), and that she has paid for this murders by giving herself sexually to the murderer Deflores (Trystan Gravelle) – seems almost a shame. It would, granted, be a very different production, and – weirdly – probably seen as a going out on a bit of a limb. And there’s no reason to do it, this production works just great. For some reason I just couldn’t stop wondering how it would be.

I guess part of it is that the play is already funny, and has an absurd, ostensibly comic sub-plot (although like much early-modern comedy, it is also frequently cruel) about the young wife of an asylum keeper being wooed by two young men who have contrived to get themselves locked up as loonies in order to be close to her. And Dromgoole’s production isn’t without its laughs, most notably from Gravelle, Pearce Quigley as the Asylum gaoler Lollio, and Morahan, in her more deadpan or conspiratorial asides to the audience.

It’s interesting, too, how little I minded the meticulously researched, authentic-looking period costumes. I guess inside the Sam Wanamaker theatre, once you’ve looked at the wooden building, and the candlelit playing area, it seems only natural (and neutral even) that period dress should be a default. Certainly with plays with such weirdly questionable antique morality (perhaps particularly when played as tragedy) the costumes and “authenticity” are a necessary excuse note for the otherwise possible charges of misogyny and stigmatisation of the mentally ill. (But, oh, how much more uncomfortable it would be for a modern audience to have mentally ill and learning disabled actors playing the asylum inmates. Or, hell, what a great production if *everyone* was. Season idea: get Graeae in to do all the most problematic early modern plays which feature disability).

Both play and production are good: solid, definitely, and with real flashes of wit and invention thrown about too. Oddly, having seen Joe Hill-Gibbin’s ersatzDeutsch production in 2012 at the Young Vic, which sadly I never wrote up, part of me felt quite pleased to be seeing all the play presented relatively straight. Although I spend more time being staggered by how little the two productions seemed to relate to the same play at all. It was instructive to the point of shocking how the shifts in dress and aesthetic seemed to move the entire meaning and mileau of the play. I suspect Hill-Gibbins’s production must also have been cut to ribbons. I did wonder if both productions had each cut about half, but magically managed to each cut a different half, but apparently the Sam W. theatre version is more or less full-text minus nips and tucks.

What’s also interesting here is how little the class elements seem to assert themselves. Because the play was (one assumes) intended solely for a contemporary audience (it wasn’t even printed in the playwrights’ lifetimes), I guess * a lot* of the status stuff in the relationships between characters just went without saying at the time, but here, while the servant-owning class characters do still sound posh, and the servants tend to have regional/national accents (a Welsh Deflores, a Manc. Lollio, a Scottish Antonio (Brian Ferguson)), there’s never really a sense of class boundaries. Deflores first touch of Beatrice-Joanna makes her shudder because he is repulsive to her rather than because she is “his better”.

Actually, the entire Deflores – Beatrice-Joanna relationship is fascinating: indeed, some of her asides, played admirably straight by Morahan, suggest the possibility that she even starts to fall for this hated tormentor, when, in her service, he repeatedly proves himself far more ardent and practical than her intended. The unlikelihood of this to the modern mind (even when intelligently accounted for as a possible sort of Stockholm Syndrome) and perhaps Morahan’s urge to think the better of her character, prevents Beatrice-Joanna from becoming a possibly-more-frightening carpicious nymphomanic (which in turn might also aid the conversion back into comedy?).

But I’ve started doing that Michael Billington thing of re-directing the play instead of attending to what was in front of me. And what was in frontt of me was very good. Maybe ultimately a tiny bit too trad. for me not to start thinking of ruses to make it less so, but nonetheless this is a fine, fine rendition of a fascinating play.
Posted by Andrew Haydon at 18:30