The Fever – Almeida at The May Fair Hotel 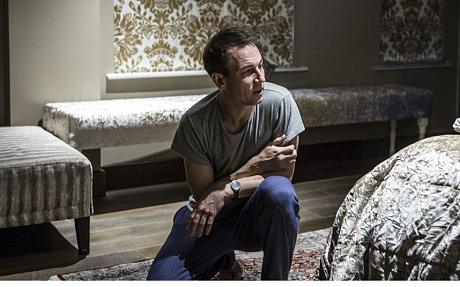 Is there a smarter theatre in London at the moment than the Almeida? Following Rupert Goold’s electrifying first season (American Psycho, Charles III, Mr Burns), his second season – themed around frightening wealth – is as timely and vicious a commentary on the spirit of these horrible times as you could wish for.

What The Fever is, is a monologue – originally performed by Shawn himself in friends apartments around New York – about your average, well-off, massively privileged, middle-class, left-liberal, apparently in the throes of some tropical disease in a hotel room in some newly revolutionary developing country.

The piece is really a game of two halves: emphasised here by a transition between the sitting room and the bedroom of this enormous hotel suite. In the first half, we hear about the character’s childhood and upbringing. Precious gifts and precious treatment are lovely described with such fanciful detail that it’s hard to know if the character is taking the piss, or genuinely reveling in vividly remembered delight. A bit of both, it seems. And the narrative here is on e of growing self awareness. A gradual sense of emerging from the layers of wrapping and cosseting and warnings not to go to “bad neighbourhoods” where the “tough kids” live, into sweaty, sticky, sickly third world reality.

The second half [spoiler of sorts] sees the same character – having obsessed about Marx, and about commodity fetishism; some brilliantly acute observations and explanations – ever more feverishly go to the logical end of his train of thought, concluding that he, that we, the privileged, *need* this war against the poor just in order to carry on with our pleasant lives.

In Shawn’s schema, “the poor” (quite rightly) ranges from the people who clean his hotel to nearly entire countries in the developing world. The genius of Icke’s production is finding pretty much the cuntiest venue imaginable and sitting us right down in it, so we as an audience can really revel in the shitty, shitty situation that the world’s in. The May Fair Hotel (who, in fairness, are at least letting the Almeida use their space to destroy them) is about as vile a display of ostentatious opulence as you could ever wish to avoid. The menu on the wall for the attached restaurant has side dishes that cost what a reasonable person might expect to pay for a meal, and a veal chop (£40) that costs more than my weekly food shop. (Although, weirdly, each room is dominated by a vast television set (even the sodding bathroom). It might be fucking expensive and bling, but the hotel clearly takes a pretty dim view of its guests’ interior lives.) Being immersed in this absolutely real manifestation of vertiginous inequality almost does all the play’s work for it.

However, to suggest it does is grossly unfair to Tobias Menzies, who plays this first-person narrator-cum-fellow-traveller. I’d only ever seen Menzies on telly before now. And, well, he’s never been typecast as sympathetic or not-posh, has he? Indeed the only note he ever seems to have been given by directors is “could we have a bit more more sneering, Tobias?” It’s a real pleasure to discover that in the flesh he’s a tonne more warm and likeable than his TV parts, and with a far more mobile, sympathetic face, while still remaining noticeably posh enough to remind us of the privileged life he’s talking about (indeed, in this, it feels like Icke has deliberately cast Menzies *and* his back catalogue of upper-class roles).

I guess what makes for such a marked contrast is the fact that rather than being a person operating their power viewed by the external eye of the camera, here Menzies inhabits the space with us. And, rather than us observing his actions, his whole time is spent talking directly to us, face to face: his unflinching eye-contact throughout is mesmerising. And the character is, by turns, charming, ingratiating, plausible, convincing, hectoring, and, by the end, chillingly direct.

The play leads us; the deliberately (at least) middle-class, privileged audience – no matter how much we wish we weren’t so – from our comfortable, well-meaning, good-intentioned, Left- or Green-voting happy place, into the slums of the developing world to watch the execution of a Marxist rebel, to see the squalor in which others are forced to live, simply in order that we can carry on the lifestyle to which we’re accustomed. And this is the text’s genius, it doesn’t try to present a solution. It doesn’t for a second suggest we can or should even want to change. It’s more challenging than that. It just forces us to admit to ourselves, privately, that this situation, that the world, is disgusting. And to acknowledge that we’re all responsible. And that we will keep on being responsible for it. Even if we’re not the worst offenders (and, looking round the audience, I’d guess that most of us weren’t. We stuck out like 25 sore thumbs in the posh hotel lobby, in our relatively shabby clothes and our £40 weekly food shopping budgets), we’re still offenders. Even if we don’t live in the lap of absolute luxury, I’m guessing that for £30 theatre tickets, we’re hardly up against it. (indeed, why my outrage at a £28 sirloin steak if you think it’s reasonable that people can afford to spend more to watch someone talking for 90 minutes while drinking a free glass of very pleasant red wine and eating some free Lindt chocolate). It’s nothing new. We already knew the world was unequal. What’s brilliant is the violence with which it proposes that we deliberately maintain the status quo *precisely* as we do. This sheer confrontation of us with our darkest selves – the bits of us that, while perhaps campaigning for social justice or Tweeting outragedly about this or that terrible thing, make damn sure we’re campaigning all the harder for a nice flat to live in, and nice things to surround us, and nice amounts of disposible income, that we may come and pay £30 to watch a similarly comfortably off actor deliver a stern rebuke, executed with perfect judgement and panache in a hotel in one of central London’s most expensive districts.

“Self-reflexivity” doesn’t even begin to cover it. Icke knows absolutely what he’s doing by creating this performance. And it’s the very way that the piece refuses to agitate for change, or to suggest that there’s any likely solution to our greed or self-interest that ultimately makes it so powerful. And, ironicially, might just provoke small, gradual, tiny, not-self-interest-threatening attempts at change in those who see it. Or, as the fevered protagonist suggests, maybe it won’t at all. Because we don’t ever, ever want to fall through the cosy, necessary, protective blanket of of our privilege.

Straight after the show I suggested The Fever was the theatrical equivalent of this, which I still kinda stand by: