Teh Internets is a Serious Business – Royal Court 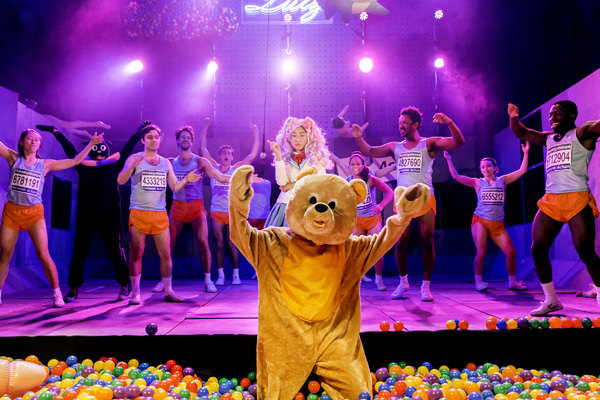 Fuck me, the Royal Court is on fire at the moment. Barely has the new season begun, and it’s put out two plays which, if not entirely redefining what plays/theatre can be, both feel effortlessly original, intelligent, are hugely entertaining and very funny to boot.

I went into Teh Internets... knowing little more than the title, the contents of the slightly weird Time Out preview they did, and the smile on Meg Vaughan’s face after she saw it on Monday night. (Vaughan’s review has already won the internet, btw.) As always, I’m going to spoiler the fuck out of it in order to a) discuss the stuff that’s in it, and b) leave posterity a better idea of what it’s like than is possible with a miniscule wordcount. (cont. under photo...) 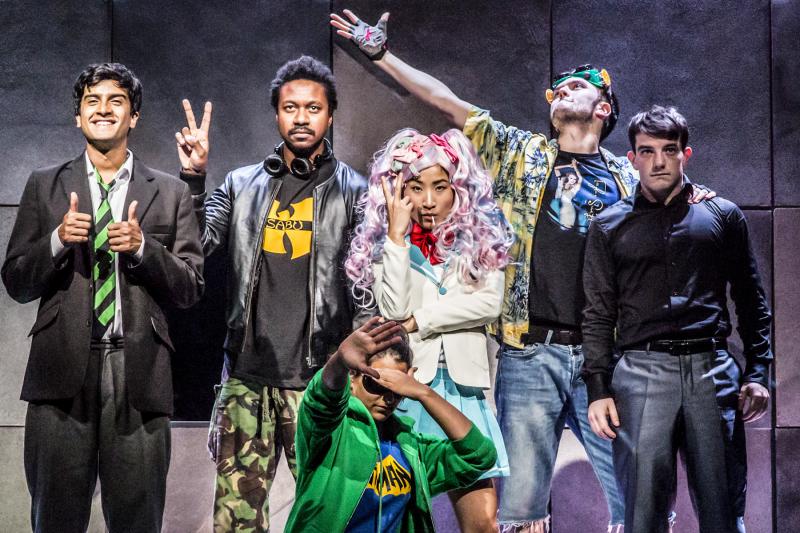 If you want a vague thumbnail sketch of what Teh Internets... is like, imagine ENRON played as the first half of Anthony Neilson’s Wonderful World of Dissocia. Or, if you have reference points that aren’t solely other plays, imagine any heist movie played out in a borstal ball pool: bright colours, animal heads, written in the most bracingly abrasive language possible.

How one responds to Teh Internets... might rather depend on the amount of time you’ve spent on the internet. I think I did rather better than I deserved thanks to spending a bunch of time with my ex-’s two thirteen-year-olds. Watching the show it finally felt like I was seeing something in the main house of a mainstream theatre that was squarely going to appeal most to under-twenty-fives, and which had *no primary educative or moral function*. And it felt fucking exciting. Indeed, I bounced out of it with my critical faculties melted by what amounts to a hardcore theatrical sugar-rush.

...is a Serious Business, when shorn of all the trimmings – of which there are many, and prey God no one ever shaves them off – is essentially the story of the rise and fall of LulzSec. A collective of six anonymous hackers who met online, never knew each other’s real names, and together hacked the websites and servers of the Tunisian Government, the CIA, the FBI, a bunch of banks, entertainment organisations, Westboro Baptist Church and the Church of Scientology. (I was going to say something about 4Chan, but since they’ve gone to the trouble of denying they’re anything to do with the Emma Watson nude photos threat and even issued a note of support, that bit of topicality is now redundant, or differently purposed...)

Nevertheless, lurking around all this is *The Problem* for lefty, feminist, anti-homophobia “moralfags” like me, which is: along with all the fucking cool and deeply admirable stuff they did (attacking Scientology, Leaving the Westboro’ Baptist Church’s website with a message saying God Hates Bigots, facilitating the Tunisian Revolution... etc. etc.) 4Chan, Anonymous, and LulzSec also had a “nothing’s sacred” attitude toward offence which crossed pretty much every boundary of taste, decency, and often progress. And, being anonymous, leaving others to fill in the gaps, this winds up looking pretty frightening. A group teenage boys egging each other on to be the most out of order, while cloaked in complete anonymity, with the most kudos to the person who goes to the worst place... well, it’s never going to end well, is it? And, in the main, the “play” puts a tiny bit of that side of things out there, and leaves it to the audience to decide what they do with that. On one level, it’s great to have properly morally complicated “heroes” for a left-liberal audience. They’re not flawed in a cosy way that you can easily accept. They often say aggressively misogynist, homophobic, utterly vicious things. They’re frightening like the Sex Pistols were when they wore Swastikas and adopted a total blank-face attitude to accepting any sort of moral responsibility. At the same time (also like the Sex Pistols) LulzSec also seem to display a peerless grasp of civil liberties, anti-censorship, freedom of speech, and even social justice. On the other hand, they’re also (mostly) just (frighteningly clever) kids. I’m not sure I’d stand by much of what I said when I was 16 either (and theoretically I was pretty “right-on”). So, yeah. No easy answers.

What’s bloody wonderful about the play (which I’m using to include what’s said, what you see, *everything in the production*) is that it doesn’t even attempt to lead you by the nose to a moral conclusion. Weirdly, because the play follows the course of real events, the story arc it’s got is basically the same trajectory as Macbeth, or Julius Caesar, or The Italian Job: some very clever mates (who also say some problematic things) plan to do a thing, get well hubristic, ultimately overstep the mark and are undone. One hopes the script of this version is eventually printed (props to any rehearsal process which so thoroughly does a number on what the “director” was handed by the “writer” to the extent that a script can’t be printed by press night), A-Level students in years to come will study “LulzSec’s tragic flaw”.

But I’m talking about generalities here. And there’s so much detail to adore too. Christ. The “script” (or at least what the actors say), is really admirably un-literary (no “fine writing” here), but rammed with great jokes, and some genius set-pieces of smart-assery – the bit where one of the hackers, a South London schoolboy – demonstrates to his maths teacher why he shouldn’t do his homework using statistics is especially memorable. Chloe Lamford’s design (and esp. costume design) offers a Three Kingsdoms-like grey-walled room of the utmost simplicity, full of doors, windows and trapdoors through which characters and other performers DRESSED AS MEMES appear. Oh, and there’s a massive ball-pool at the front. Which is frankly genius.

Hamish Pirie’s staging has the sort of lightness of touch that must have nearly killed the cast to achieve. It feels casual and random in exactly the way the piece, and subject demand. The (shorter) first half feels more like a party than *theatre* (what a heavy, leaden word that sometimes seems). If it wasn’t for the way in which The Plot (plot!) keeps nudging its way through, we could be happily putting this in the same bracket (or *unhelpful pigeonhole*) as Forced Entertainment or GETINTHEBACKOFTHEVAN. Emma Martin’s choreography is interesting. It’s primary impulse seems to come from an attempt to dance bits of computer coding. Which, at a purely conceptual level, is a great idea. Because choreography is even more subjective than music, I’m going to admit I’ve have imagined it a bit more angular and jagged – more Gisele Vienne and less Frantic Assembly, pls. The music (James Fortune), on the other hand, is objectively perfect. :-)

This has turned into the weirdest shaped “review” I’ve written in an age. The analysis is at the top and the explanation later, and then the credit-y bit after that. Which is pretty much upside-down to how it’s usually done. But that feels like how you experience the play on one level. Like – even despite the vivid visual presentation – it’s the ideas fighting each other that happens first, then realising what it looks like, then realising belatedly that people must have made it. I love the attempt to present the internet on-stage. Next week, this article I wrote for the Guardian Theatre Blog about putting online on stage is seven years old. Now, finally, it feels like we’re starting to explore these potentials, and it’s beyond heartening that the Royal Court is in the vanguard of this progressive experiement with work that’s also intellectually and morally challenging. And compellingly watchable to boot.

[and, pace Dan Rebellato’s brilliant piece responding to Bryony Kimming’s provocation about the state of UK criticism, I think it’s clear this “review” is just an initial bundle of thoughts and reactions. I think there’s a tonne more to say about Teh Internets... and I’m looking forward to reading more in this conversation. What I will hazard as a “definitive judgment” is that the direction that the Royal Court is heading in is properly exciting. The last two nights I’ve spent there have been incredibly rewarding, and have totally rebooted my optimism for “mainstream” British theatre post-Edinburgh, where you get a bit used to all the best stuff being “marginal”. At last it feels like an audience is once more being sought *and found* for properly progressive work, and theatre that opposes the direction in which Britain seems to be heading (Tories, UKIP, privatisation, an almost entirely right-wing press). If it’s a curse to “live in exciting times”, it feels like a good time to be cursed.]
Posted by Andrew Haydon at 13:25