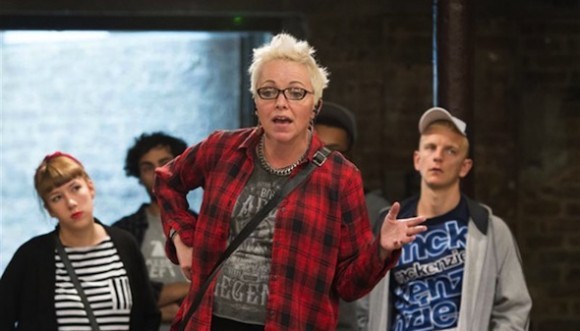 Alecky Blythe’s new verbatim piece is perhaps best seen after reading some reviews. I read Megan Vaughan and Stewart Pringle before I went. These happened to be the only two pieces (because who cares what the MSM thinks? It says nothing to me about my life, etc.), and I read them because I thought I probably wasn’t going to get round to going.

They’re both excellent pieces. Both prosecute their cases with real wit and flair. And neither of them went for Little Revolution one bit. Or rather, they went right for it. Right for the jugular, and there’s blood everywhere. The crux of both their points is “If this is a play about the riots of August 2011, then fuck off, basically.”

Which turned out to be an excellent way into watching the piece. Because you go in knowing exactly what the play isn’t going to give you, so instead you watch what it does give you much more carefully. My subsequent first thoughts have already been pretty much perfectly expressed by co-“second-wave”-viewers Matt Trueman (who saw it the day before me), and Dan Rebellato (who I sat next to while watching it and chatted to about it afterwards), both of whose pieces also conduct an extensive survey of earlier reviews, both settling on the fact that those who didn’t much like the piece had misdiagnosed what the piece was doing. In short: “It’s not meant to be a play “about the 2011 Riots”; you fuck off, Aleks Sierz.” Which in turn links up to the last thing I wrote before I saw it about whether we approach a piece on its own terms, or whether we as audience members are allowed to dictate our own terms too.

There’s a bit of both going on here. Blythe’s play isn’t really about the riots, per se, although several scenes from Little Revolution take place within one of them. And it’s not really about the rioters, although a couple of them are recorded, sensibly telling Blythe to delete their photographs from her phone (an interesting moment where a) she’s working in a visual medium as well as sonic, and b) where she apparently totally forgets that the bodies which form the shapes of a riot are also people, and people who (obviously) won’t want to be easily identified). But Little Revolution doesn’t really claim to be – brilliant (if perhaps misleading) poster image aside. And, I guess it is fair enough to voice the opinion that it should have been. However, for my money, what it actually is, is also something valuable.

What it is, is a play about class privilege, the aftermath of the riots, perhaps about the limitations of verbatim theatre, and, in common with Mike Bartlett’s King Charles III, and, now, topically, the No victory, Britain’s apparent lack of capacity or appetite for change. Or maybe, the way that any desire for change is whitewashed, glossed over, shamed, ridiculed, criminalised, ignored or rewritten. And on this score it is a subtle, successful, uncomfortable piece of theatre.

It is also the best bit of Joe Hill-Gibbins direction I’ve seen. Where I thought his Edward II suffered from a surfeit of untethered, unearned “German” borrowings (and was also a bit luke-warm about his main-space-transferred Changeling), here direction, concept, and Ian McNeil’s deceptively simple no-design design, combine to create a piece of art that is sculptural and central to the overall meaning of what we see, hear, and “read”. (It’s also far and away the best staging of any verbatim play I’ve ever seen. Yes, of course including Rufus Norris’s concert-with-flower-baskets production of London Road. Makes me wish Joe H-G had directed that too.)

The Almeida’s auditorium has been transformed from the familiar deep, low-slung end-on thrust/proscenium into what feels like a small, makeshift, intimate, high-vaulted, in-the-round space. The back of the stalls have been cut off so there’s no comfy hiding out in the darkness under the balcony. There’s often a lot of full light on the audience, and we can all see each other, and the numerous players – the cast of Little Revolution is swelled by a “community chorus” (who may or may not be being paid, which may or may not be an issue). The audience itself is the most mixed I’ve ever seen at the Almeida. Much more like the street outside than the sea of white-haired white folks that Michael Attenborough’s programming used to attract.

What’s most striking of all, is that, in the centre, there is a small “stage” area, but this is frequently not used, in favour of people stood haphazardly (obvs. not really haphazard) around elsewhere talking over it, round it, ignoring it altogether. The stage almost becomes a void at the very centre of the thing, while the audience is almost implicated by the action going on right next to us. Which physicalises an crucial point. I was strongly reminded of that other masterpiece of arthouse audience-complicity fingering, The Author, more than once. And that line in Gogol’s Government Inspector “You’re laughing at yourselves”. Except no one has to point it out. We’ve sat opposite ourselves. And others of us have been taped and are having their exact words spoken by actors.

Something else, that I think only Rebellato has really gone into, is that the piece very specifically charts two different post-riot campaigns. One is to replenish the stock of a local small businessman whose shop was looted and whose insurance wasn’t up to date. The other is a much wider campaign attacking the treatment of Hackney Youths by the police and subsequently their vilification by the media. One is briefly put in mind of Brecht’s famous question: who is the bigger criminal, the bank robber or the man who owns the bank? And we see how media attention focuses on the “feelgood, community coming together” narrative of everyone chipping in to help the small business owner, whose shop they all use, who simply didn’t fill out an insurance form, eventually leading to a Marks & Spencer-sponsored street party. While the two women trying to actually highlight the need for social change are roundly ignored. Even in the play itself they get less stage time, and there’s only two of them.

What they’re doing is “boring”. It’s not really funny or fun, just two women (plus Blythe) plodding round housing estates knocking on doors and putting leaflets through letter boxes. Against this there’s a massive machinery around the “community pulls together to save local businessman” story, which is picked up by the telly, even unto encouraging corporate sponsorship. And if this isn’t a perfect picture of how British politics has failed, I don’t know what is. Rather than the media actually talking about the issues, it prefers a nice story which at once vilifies the “rioters”, lionises entrepreneurial, turns communities into individuals and their familes (thereby rubbishing the idea of systematic discrimination because “we’re all individuals”), and most importantly papers right over any actual cracks that need serious attention by pretending that they had nothing to do with why the riots started.

In this, the play is pretty merciless. Granted, being verbatim, it “says” these things through editing and focus, rather than putting this entire argument into someone’s mouth as, say, David Hare could. But nonetheless, the argument is there, embedded in the very structure of the piece itself. In fact, if anything, it feels like a strategy that underlines too little for a theatre culture too used to be being spoonfed its take-home moral message (hello, Sierz). Little Revolution makes its audience work for its meaning, which is a risky strategy, as they could end up digging out completely the wrong message or no message at all (or indeed, there’s no “message” per se, and this version I’m seeing within it is a product of my own politics plus a confirmation bias-style desire to see those politics adequetely, respectfully and intelligently portrayed on stage).

The fact that Little Revolution has generated such a wide variety of responses, but more than this, has felt like an itch that so many writers-about-theatre *needed* to scratch – that feels like just about the best result possible for something which could easily be seen as “not actually Art, of course” or “not even theatre, really”. In this especially, it strikes me as yet another perfect bit of programming from the new regime at the Almeida, absolutely on a continuum with American Psycho, King Charles III and Mr Burns (1984 doesn’t count because it totally pre-dates the Almeida and I didn’t see it there, so it doesn’t quite feel part of the same story, although it also fits...).

on Dave Hill’s London Blog for The Guardian 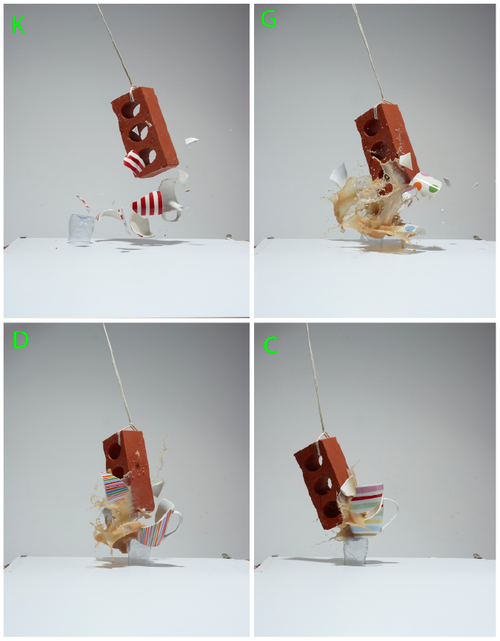 (from this interesting piece on the blog of the graphic design company who made the Little Revolution poster (scroll down, until someone tells me how the fuck you link to a specific piece on Tumblr. Stupid thing.)
Posted by Andrew Haydon at 13:19

Every positive review of this play I've read has surmised that those of us who did not respond warmly somehow could not see the underlying meanings and intentions as variously defined by each reviewer - the weird thing is that it's possible to see all that - and continue to resolutely find this production and its effects overt and infuriating. I went with no preconceived notions about this having to be about the riots per se - Little Revolution, the clue is even in the name - I meandered on the honing in on Hackney as deliberate for more reasons than that just happened to be where the writer trundled up with her dictaphone as riot broke out - it was clear soon enough that this was not verbatim theatre as we know it - an enclave where I couldn't see the various stances outlined so easily working if Alecky had helicoptored into, say, Woolwich - no yayas and multi class community spirit there to easily mimic. Brecht popped into my head too - couldn't help wishing that the nasty alter ego of the shopkeeper in The Good Person of Szechwan would pop in and scare us all shitless - at least that would have given some relief from the seemingly (to me) interminable focus on the purposely bad-seeming do-gooders and so many other one-dimensional characterisations. I know I know, that was on purpose and I was meant to feel that and how predictable a trip to Islington can be. That play's like a bloody rohrschach test. And I even like your review by the way.

Thanks for commenting. That's a really interesting point. Will reply properly later, but I wanted to say immediately that the Rorschach Test comparison is actually genius.