Shorts: In praise of libraries 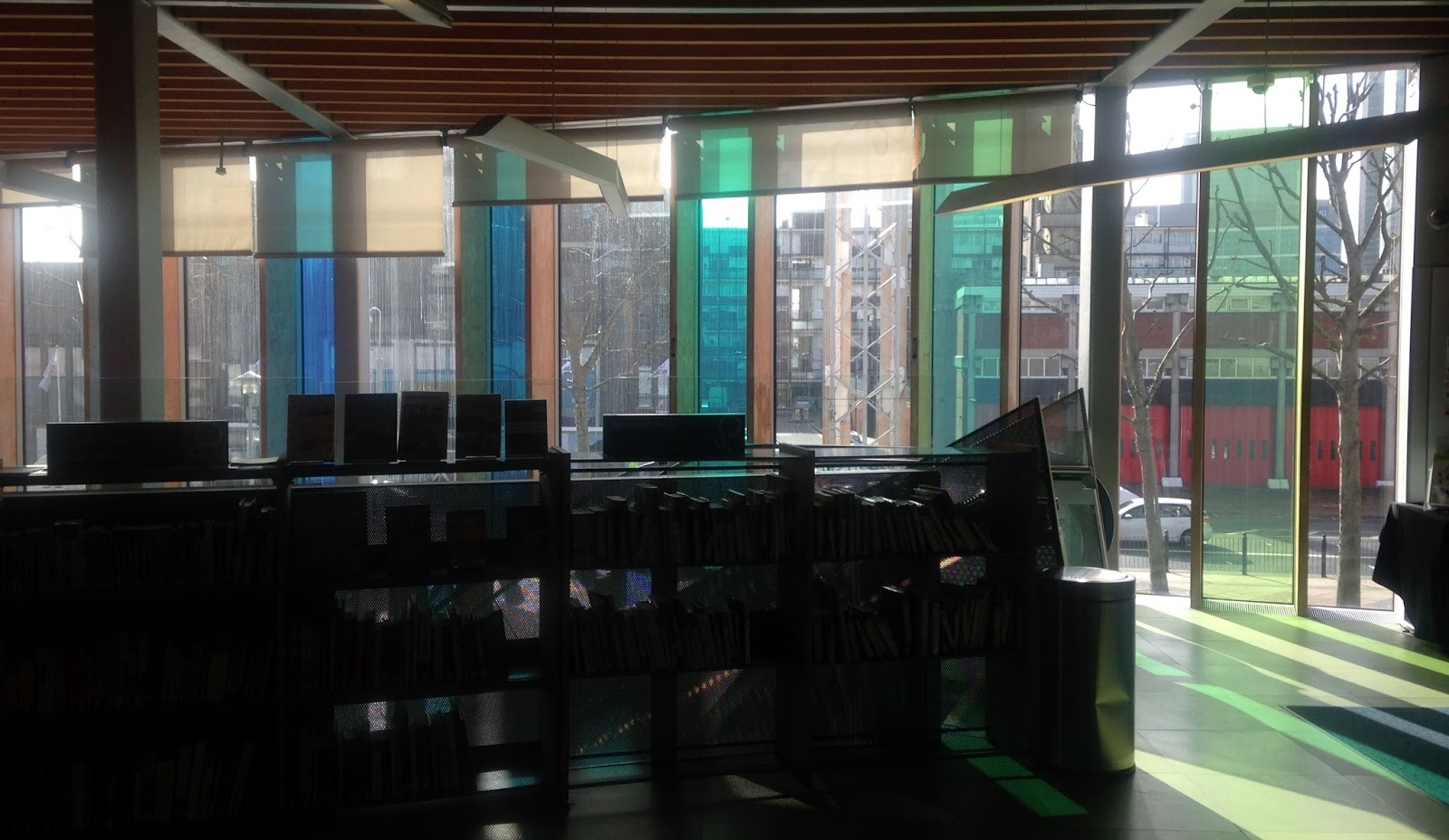 This week I’ve been doing all my work in Chrisp St Library, Poplar. And, no, I shan’t call it an “Idea Store”, you rebrand-crazy, business fascists. It is precisely the opposite of a “store”. And it’s been a genuinely remarkable experience. Yes, it’s been helped by the fact that this week has had glorious sunshine and the vast skies round Poplar have looked spectacular through the library’s long, modernist, stained-glass windows. But what’s really remarkable about it is the fact that you can just walk in here and work. “Like a coffee shop, then?” you ask. No. Not like a coffee shop. Because at no point do I have to purchase my right to sit here and work by buying a cup of coffee. (They do have coffee, though, should you fancy a coffee. Pretty good coffee, really. And. It. Costs. 50p. A. Cup. (hot chocolate 40p.))

This is a public space where, as Someone In Great Britain (I needn’t even be a GB citizen), I can go, for free, and work. They even have free wi-fi and a superabundance of plug sockets. (I haven’t actually worked out how to *log-on* to the wi-fi, there’s an A4 list of instructions that made literally no sense to me whatsoever, but that’s neither here nor there.)

What’s most strange about it, is how shocking it feels. How deeply weird and subversive. How much it seems to undermine my entire understanding of how GB PLC works. The very idea that there are places in Britain where you can go where you don’t have to rent desk space at, well, at roughly £2.50-per-cup, which, if you’re really good at drinking coffee slowly and ignoring glares, might buy you a couple of hours. I’ve been here all afternoon and I’ve spent 90p. Voluntarily.

I could even have read a bunch of books. Free. Hell, if I actually lived round here full-time I could join the library (free), and take books out to read at home (free). Added to this, it has an ethnic mix that the NT (for instance) would kill for. It’s got a really nice atmosphere. It’s quieter than a coffee shop, and they’ve not playing irritating music.

And the really staggering thing is that it’s just been provided for people to use by the state. The entire gesture says: of course, have it; of course it’s free; if you want to come in and make use of our facilities, do it; it’s what we’re here to provide.

It feels like a kind of madness. It almost makes you giggle at how wrong it seems that it should exist in Britain at all at the moment.

A friend once said to me (paraphrase): “in London, you have no public space at all. Or, none of you seem to feel like you have any ownership of your public space at all.” I think I denied it at the time, and muttered something about the South Bank (lined with places where you can buy stuff, and coffee shops).

Sitting here, I kind of get it.

This might be the last free thing that isn’t an absolute essential (and I’d argue it’s damn close) left in the UK.

And you realise just how far down a road to total neo-liberal, free-market economics we’ve been tricked. How much, no matter how much we don’t agree, our minds have been conditioned into accepting the “reality” of paying for everything, that everything costs money, that there’s no space without rent.

The library stands (it would be literally, if the sun obligingly went north-south instead of east-west) in the shadow of the HSBC tower.

And I feel surprised to be able to sit somewhere for free.

The library is what socialism can and should feel like.

And our theatres should definitely feel a lot more like this. And a lot less like £2.50-a-cup coffee shops. You want inclusion and access?  You want to make your building feel like the public own it? Charge sensible prices for a cup of tea, and don’t require that people even buy one to sit in the building and enjoy it and feel that it's for them.
Posted by Andrew Haydon at 09:51

This is a beautiful vision of what should be through one shining example of what is. Well said, well written, well done.

Incidentally: my father, born in Poplar in 1903, left school at 14 to earn but when to night school nearby at the Bromley by Bow Institute, as I think it then was, until he went to the LSE at 27, working as a railway clerk in the mean time. A socialist and a lover of books. He would be/is delighted to know you had this experience in his old home patch.