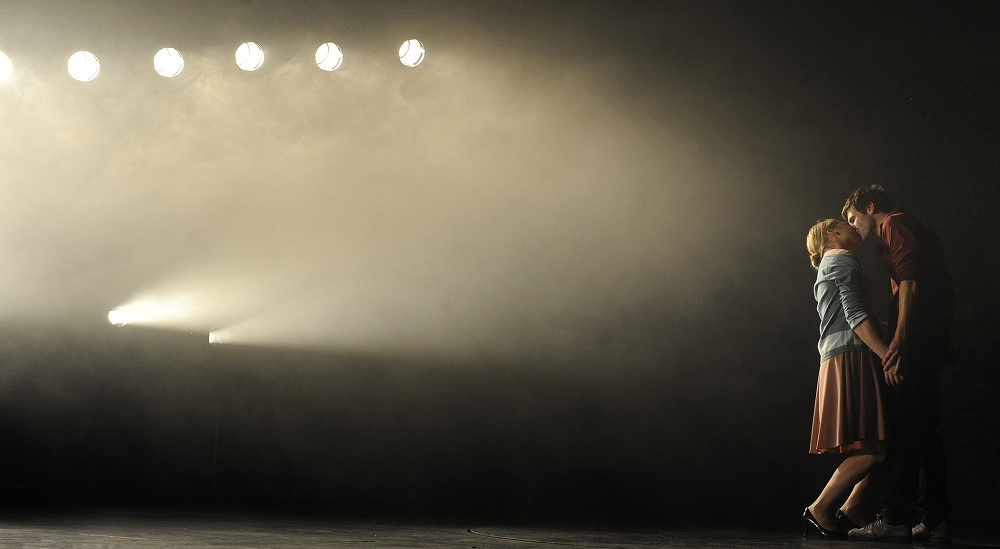 Should you read a new play before you see it? It’s a question I’ve wondered about since June 2008 when the concept was first suggested to me. Now, obviously I should have just seen one of Michael Longhurst’s London runs of Nick Payne’s play. Then, not only would I not have been reading the play in English for the first time ahead of seeing it in its German language première production, but I’d also have something useful to compare it with.

As it happens, having seen photos from the Tom Scutt-designed production and read the script, I think I can pretty much imagine what it would have been like with Sally Hawkins and Rafe Spall animating the words I had to imagine for myself while reading them. (Although, while reading, I couldn’t quite stop thinking of Payne himself as the ideal Roland, Marianne was – interestingly – more of a blur.)

But reading; and, much more, reading as “a critic”; the thing it chiefly made me wonder about was the extent to which the play crucially depended on the element of surprise. How the gradual revealing of bits of information, and then a key with which to contextualise those bits of information, needed to be a surprise. Something for which you could pat yourself on the back for understanding as it unfolded.

– if you haven’t seen Constellations, it goes like this: a man and a woman meet at a rainy barbecue. The chat briefly. Then the conversation begins again, but runs a bit differently. This happens several times before the point to which the conversation begins again from moves on. Like in Caryl Churchill’s Heart’s Desire. Or that sketch by David Ives. Or a bunch of other plays. You know the thing. Anyway, as the story “progresses” we learn Marianne is an astrophysicist (and Roland is a beekeeper). In her explanations of quantum mechanics an string theory and stuff, Marianne spells out the theory that there is an infinity of possibly universes in which every possible version of events plays out. (Don’t think about it now. You’re dying in thousands of different ways right this second in so, so many parallel universes that it’s too horrible to contemplate.) –

But it’s when you do begin to contemplate infinity – far easier when you can look up from the book and stare out of the window at all the cars and people, who wouldn’t be there in billions of other versions of the universe, than in a theatre where the plot won’t stop (at least, probably not in your universe) – that the fact that it’s just this rom-com (rom-tragi-com, I suppose) starts to rankle. But *of course* Payne can’t put infinity on stage. And why shouldn’t he write a clever, funny, touching little play?

In some sections – rendered in italics mostly, in the text (the changes in universe are generally bold to not-bold) – Marianne is dying from brain cancer. Roland isn’t, in any universe that we see, btw. Just Marianne. Dying. In between all the bits where they meet, or don’t really meet, and fall in love, or don’t really fall in love, and break up or not. And cheat on each other. Or don’t. And then, just after the final cancer scene, we get one last look back into an “older” alternate universe bit, where there’s a will they/won’t they possibility. And it’s so tear-jerking, and calculating, that I’d have thrown my copy across the room if it hadn’t been a PDF.

I mean, it works; and it’s a pretty clever play. But at the same time you quite resent it when you can see how it’s being done rather than experiencing it being done to you. You wonder vaguely if there’s a universe where there’s a version of Constellations which isn’t quite so crowd-pleasingly manipulative and determined to make you heave a big sob or sigh and wonder at the cruelty of the universe and, oh, how eternal love is, or grief is, or fucking something. The sort of thing that never fails to make Charles Spencer spunk his stars.

The question is: after that, can it do it to you properly, when you’re watching?

Well, in Ramin Gray’s version (in German), at least on Tuesday, when the production was returning after a bit of a break, and with me watching with a streaming cold, trying mostly not to cough too much all the way through, it was hard to say.

Gray’s production is a bare stage affair, save for a gaudy, reflective, golden brick wall at the back (for no other reason than the Schauspielhaus had one from a production, and Ramin liked the look of it, apparently). Above it hangs a gradually upward curving semicircle of stage lights (licht – Oliver Mathias Kratochwill). It looks like the sort of thing you might find in a Hofesh Shechter show. Semi-regular haze highlights the wash of warm, or cold glare.

As you might expect, each change in universe is signalled by a snap change in which lights illumine the performers. (Although I can’t help thinking Ramin has been a coward here. This was the German language première, FFS – I reckon he could have taken his time and had a costume change for Every Single Change Of Universe). It’s unshowy, but effective. Not really a patch on Scutt’s conceit of hanging the stage with precisely the balloons that Marianne says she will throttle Roland if he ever brings to festoon her death bed, also symbolising, of course, stars, and atoms, and sperms, and, oh all sorts of glowy round things of cosmic (in)significance. In a bunch of different universes.

The performers – Nicola Kirsch (last seen by me being UTTERLY BRILLIANT in Hamlet ist tod. keine schwerkraft) and Thiemo Strutzenberger – are, well, fine. Perhaps a bit under-powered, and the style of acting, if it was being nailed, still seemed to fall slightly awkwardly (or interestingly) between the German school of post-Brecht and British precise naturalism. And a few of the choices felt a bit weird. The costumes (Christina Sandner), well, Thiemo’s was fine, and Nicola’s looked a bit, well, kitschy-fifties-Mad-Men-Barbie. Which felt odd.

But, you know what? You know how some people (in fact Charles Spencer usually), find Simon Stephens plays egregiously depressing? Well, I don’t think I can remember a play that I’ve found more depressing than this. Which is some achievement since only two nights earlier I was watching possibly the most depressing meditation on a mother’s suicide in the aftermath of the Nazi genocide. Constellations is depressing for precisely the opposite reason: less the banality of evil and more the evil of banality, perhaps.

None of this meditation comes directly from my experience of watching Ramin’s production, and I daresay it’s just a combination of circumstances that makes me think it all at all anyway, nevertheless, yeah: Constellations, my new most depressing play ever.

Dear Andrew, I read your review of Ramin Gray's recent production of 'Constellations' with interest. I haven't seen the production myself. I was sorry to read that you found Marianne a bit of a "blur" and that the play made you want to throw your PDF copy across the room. Certainly wasn't my intention to write a cynical play. Also, I wondered if the following quote might perhaps help contextualise your depressive post-show feelings: "The reductionist worldview IS chilling and impersonal. It has to be accepted as it is, not because we like it, but because that is the way the world works", Steven Weinberg in Brian Greene, 'The Elegant Universe' (London: Vintage, 2000), p. 17. All best, Nick Payne.

Sorry it's taken me so long to such a magnanimous response to what is, let's face it, a pretty intemperate, unfair response to your play.

I think, given what a rough time I was having in Vienna over-all (ill, phone-stolen, *really* shitty weather) I was probably in entirely the wrong place mentally and/or emotionally to even begin to look at your play -- not even "objectively" exactly, but at least with an even-minded subjectivity. It happens.

This isn't an excuse (I'm not sure a snapshot of how one man watched another man's play at a certain point in time (in one universe) should ever really need *excusing*), but I do think in other circumstances things might have panned out differently.

And, actually, I think I have a more open mind re: Constellations than this suggests. I would happily watch another production tomorrow, were there the opportunity. I hope one day there will be.