The One – Soho Theatre 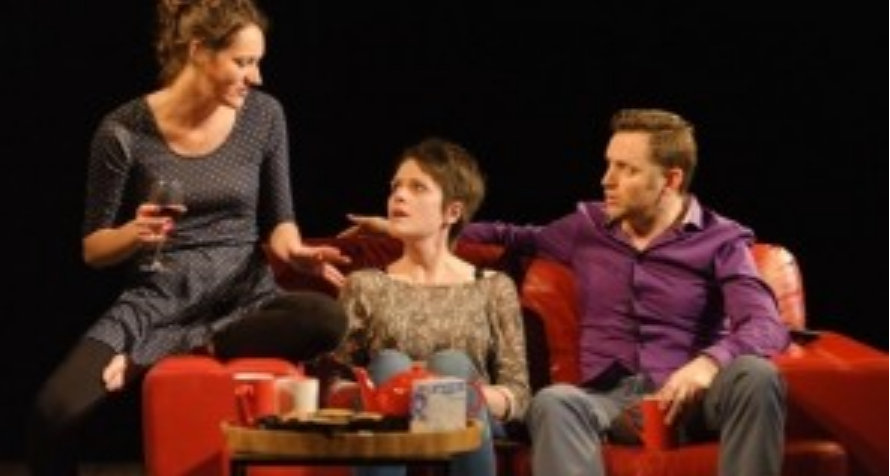 Women really can be utter cunts, can’t they? On the surface, this seems to be the question explored by Vicky Jones’s début, Verity Bargate Award-winning, 65 minute, three-hander, dedicated to, and starring, her long-term artistic partner Phoebe Waller-Bridge; whose Fleabag Jones directed to deserved acclaim last year. Indeed it’s hard not to think of The One as Fleabag II. After all, theoretically it explores *a lot* of the same territory – the itchy edges around contemporary feminism; the same what-ifs? – what if women want to watch porn? What if women make rape jokes? What if women aren’t in the least bit sisterly? What if a woman is apparently so totally without direction that her only pleasure is to torture the lunkish wet that she’s ended up with (at least for the time being)?

I suspect that much of my initial response to The One was due to the imperfect pairing of Jones’s text and its director Steve Marmion. I think *on paper* The One might be a significantly better, at least structurally, rhythmically, and in terms of a building arc, than it feels here. I also think Rufus Wright is badly miscast as as Harry, the crumpled foil to Waller-Bridge’s Jo.

The play itself strongly recalls Who’s Afraid of Virginia Woolf: a college professor and his lover torture each other emotionally while getting more and more drunk; and there’s stuff about the child that never was, too. The difference is that they’ve only got one other person (occasionally) off whom to bounce their sparring – Harry’s ex- Kerry, who turns up after being sexually assaulted by her partner, occasioning an incredible tirade of scepticism and rape-jokes from Jo (at the same time potentially re-casting our understanding of the play’s opening as a “rape scene”). They’re much younger (he 39, she 29, says the script) and unmarried, too. There’s only that sense of being trapped in an eternal stasis if you think life ends at thirty (or forty) and four years is a long time to be in a relationship.

But, for all the obvious Who’s Afraid... parallels, the play I find myself thinking about is Blasted. The One, like Blasted, is a(nother) play (by a woman) that no one wanted anyone to write. It is unremittingly unpleasant. It doesn’t seem to understand any of the rules of theatre. You don’t know what it’s for. You don’t know what you’re meant to think about it or do with it. And it has the potential to actually make you pretty angry at it. It feels full of cheap shock-tactics and deliberate attempts to goad a reaction. And yet, it is clearly talking about some important subjects. And talking about them in a way that possibly you haven’t seen them talked about on a stage before. For that reason, I’m incredibly reluctant to actually come out and say The One is a “bad play”. Because no one wants to be that dumkopf again, do they?

On the other hand, I am willing to say that I didn’t like Steve Marmion’s production one bit. Every single aspect of it felt misjudged. There are excruciatingly blocked and scored “movement” sequences between scenes. (Not in the text. And, obvs I’m fine with not-in-the-text” *when it’s good*. This isn’t.) They seem aimed at underscoring the “erotic game” aspect of the text – the blurb for the show suggests, it might just be about: “a relationship based on desire, dependency and dirty games” [their lack of an Oxford comma] and: “a couple trapped in a destructive cycle of love and lust” – but they seem, at the same time, to undermine this by being deliberately cheesy, almost sarcastic; albeit at the level of execution as much as intent. Even this might be deliberate, but there are only so many postmodern bluffs on can take before you have to call nonsense on nonsense.

Another galling aspect to the production is the length. The One is taken at breakneck speed, bringing it in at roughly 65 minutes. Granted, it’s a classic problem of British “Writer’s Theatre” when directed with apparent deference to the text: when there’s “nothing” – no dialogue, on the page – then *obviously* nothing can happen; so everyone just says all their lines, one after the other, person after person, until all the lines are gone and the play stops (apart from the scene-change “movement sequences”).

It might have been seeing Thomas Ostermeier’s version of Blasted, a few years after seeing the Royal Court re-mount of the original, that first made me realise that a production could actually provide a framework through which the content of the play could be better understood. Here was a production (Ostermeier’s) that took its time, and allowed the play to breathe; allowed the audience to think about the meaning; a production that wasn’t hooked on energy and adrenaline and shock. I found myself wondering what The One would look like given a similar aesthetic treatment. What if, rather than being played as a wonky comedy of manners (my God, there’s a lot of mugging), it was taken seriously as drama, and then run through an arty mill.

Nonetheless, all these reasonable thoughts aside, there’s still *the play* to contend with. There is still the fact that you don’t know what it’s for. That unless you’re of a spectacularly callous disposition, you won’t really find the relentless rape-joke humour funny. That all the characters are really, really awful people. It’s odd. It feels like a backlash against the current wave of feminism – a play that really wants to blur some lines, rather than protest about Blurred Lines. But then, this wave of feminism is pretty much a reaction against the snowballing of nineties “lad” culture, which was a reaction against the “right-on” student politics an alternative comedy of the eighties. So, what The One feels like is a nineties throwback. An In-Yer-Face revival. So perhaps it really is the new Blasted. After all, Sarah Kane also made some pretty sick jokes too.

If I’m honest, the first thing I thought when I came out of The One is that Vicky Jones is bloody lucky she’s a woman, because if this trope-y play had been written by a man (that trope being: “women are mad, psychotic and awful”) then he’d... Well, you’d hope it would never have been produced. Written by a woman, the play says a lot more interesting things, simply by dint of their coming from a theoretically different place. But really, isn’t Jo just Nicola Six? Even so, I can’t help feeling, thanks to the production, I didn’t really see the dynamics fully realised enough to understand either the play or even what the director was trying to say with it. Part of that problem, as I’ve said, was Rufus Wright, who without wishing to be personal, was entirely in-credible (literally) as any of the things he was meant to be beyond “a man”, much less a convincing part of a couple with Phoebe Waller-Bridge. W-B is very good at playing the part that was written for her, but since it’s turning into *the* part that gets written for her, it seems a bit unhelpful that she plays it again. Lu Corfield as Harry’s ex- Kerry is faint and weak, but it’s hard to tell here whether that’s acting, production, writing or character.

In conclusion. I’d like to see a different production, taken entirely out of the hands of those involved in the creation of the piece, it’s dedicatees and close friends. I think someone else rigorously working the entire thing through, with a burning sense of why they’re doing it, is the only possible way for it to work. This felt a bit too much like watching an in-joke between friends which had rather lost sight of where it was going or why.
Posted by Andrew Haydon at 07:36

I had a very similar reaction re the gender of the author (and the character). I couldn’t help thinking that if a man had written the line ‘you should take a dodgy one (taxi); get yourself proper raped’ he’d have been called all the misogynists under the sun. I still liked the play, though. To be honest I don’t get to a lot of fringe stuff and only went to this because its Sunday evening slot made more appeal than joining my friends in the pub to wait for the 2121 from Euston. I had seen Phoebe Waller Bridge before (as Sorel in Hay Fever) and thought she was a bit ott but still had something about her. The part of Jo could have been written for her – oh, wait a minute, it was. Despite its sometimes distasteful features the writing was pacy and often quite funny. I think the length was about right – much longer and it would have been less pacy and they’d have run out of jokes, I felt. The nonsense with the clock didn’t appeal to me – apart from anything else it was quite difficult even from the third row to read the clock face – but the set was otherwise functional and unobtrusive. I’d go to another Vicky Jones play on the strength of this.