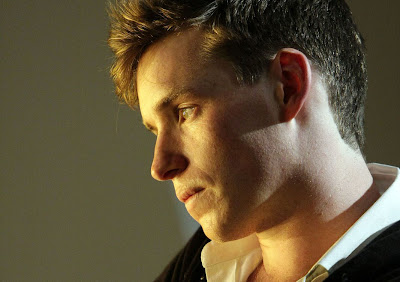 American playwright Christopher Shinn’s new play is set on the night of a fictitious presidential election. The Democrats are about to win and the soon-to-be-president-elect’s son John (Eddie Redmayne) is holed up in a hotel room with his college buddy Matt refusing to join in the celebrations. The problem is that some photos of John dressed as Mohammed at a college party have turned up on the internet and his father’s people are panicking. What follows is a taut 75 minutes of dense political argument underpinned by youthful angst and familial tension.

In this short length of time, Shinn manages a pretty thorough exploration of contemporary America’s position on Islam, liberal America’s self-loathing, the obsession with image, spin and ‘being in control of the narrative’ which dominate politics and the way in which the internet has impacted on the political scene. At the same time he manages to create a central character who is at once bright, likeable, disarmingly vulnerable and volatile.

The perennial problem with political plays set in one room with a small cast of characters is that they frequently turn into a ping-pong match of tritely opposite positions or else a ‘debate’ in which a playwright apportions lines from a fiercely dull essay into the mouths of various characters. For the most part Shinn largely avoids these pitfalls. Granted there is a moment when political science student Matt rehearses all the arguments for relativism against the black, female member of the campaign team who argues “You’re putting [Muslims] on a level playing field with yourself and that is not the case. You are more sophisticated than they are...” Mostly, however, the arguments presented are cogent realistic positions which appear to actively wrestle with the problems. Dealing with a thin band of liberalism means that rather than debate across a gulf in generalities, this is largely a finely nuanced bit of thinking. It does, however, play to a [liberal, secular] choir. While addressing the problems of liberal American self-hate, it does so from a liberal American standpoint.

The main reason that the play side-steps the pitfalls of much naturalistic political drama, though, is Dominic Cooke’s excellent direction of his impressive cast. Eddie Redmayne as John is almost too perfect a poster-boy for liberal sensibilities. Pretty, pouting, petulant and fiercely intelligent, he comes across as a kind of idealised Democrat Hamlet. Similarly, his back-story – formerly suicidal and still in pieces over a recent break-up with his boyfriend – rather than feeling contrived as a sop to characterisation is an integral part the play. His position is also the most interesting. Rather than offering comfortable relativism and revulsion at American foreign policy, it is John who questions why American free speech should be curtailed at the behest of foreign powers and religious fundamentalists.

The structure of the play suggests John as both a latterday Christ in the desert and a modern Hamlet; stuck in his father's court, and repeatedly prevailed upon to renounce his principles and give in to the honeyed words of his tempters. As such, the conclusion of the play is surprising in a number of ways, and it feels as if Dominic Cooke’s production chooses to cast the final moments – what the play appears to *say* – in a very specific light. Here it feels as if the right decision has been arrived at. I do wonder though, whether this is perhaps a reflection of a particular sensibility (presumably Cooke’s), and whether there is a production in which the final moments – even without the introduction of the expected Chekhovian finale – reflect a darker, more tragic reflection on what has just taken place.
Posted by Andrew Haydon at 20:26