Six Characters in Search of an Author - Gielgud 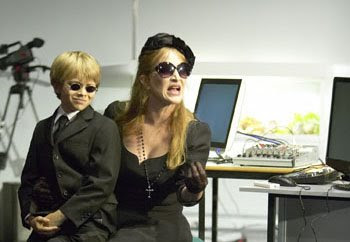 Having grumbled recently about the lack of observable actual adaptation in the Gate’s recent “free adaptation” of Ibsen’s Hedda Gabler, Rupert Goold and Ben Power’s new version of Pirandello’s Six Characters in Search of an Author more than makes up for it. They start by transposing the action of the 1921 play from a rehearsal of Pirandello’s previous play to the post-production offices of a team of documentary film-makers working in Denmark on a film about a boy called Andrew who is committing assisted suicide.

Rather than feeling like redundant contemporaneity for no other reason than a fear that audiences can only identify with people dressed like them, this device adds a whole new set of resonances and meanings to the questions posed by Pirandello’s original text. From simply asking questions about theatre and the nature of reality, this new setting brings these questions sharply into focus by drawing our attention to how constructed so much of what we happily take on trust as reality in the world around us actually is.

The story set within this frame revolves around a central moment of horror in the lives of a broken family where the erstwhile father of a single child with an unfaithful wife visits a child prostitute who turns out to be one of the mother’s later children with her erstwhile lover. The mother’s subsequent discovery of them, her scream, the father’s guilt and the daughter’s self-disgust become the moment at which the family’s tragic future is crystallised. That Pirandello’s tale essentially concerns prostitution and paedophilia, child abuse and family breakdown is one that makes the choice of a documentary-making frame all the more canny, since these subjects often seem the only subjects explored by documentaries.

By taking the action of the *characters* intervention out of a theatrical setting, Goold and Power set up far greater scope for investigating not only the horror of their story, but also the questions and ethics of our reactions to such narratives. When the characters - doomed to keep playing out the same one story for eternity - begin to re-enact the moment that the father violates his ex-wife’s daughter, the producer becomes transfixed and while other crew members start to voice their horror, the producer starts questioning characters about ‘how they felt at that moment’ and insisting that the cameras keep rolling.

There is something comparably inexorable between her desire to make the film as the father’s desire for the daughter. What is fascinating about Goold’s staging here is that as the action progresses within the scene, the movement becomes increasingly stylised, and when the mother bursts into the room becomes staccato, jerky opera; almost a standing rebuke to television’s desire for realism at any cost; as if demonstrating that abstraction – art – can communicate sheer horror more effectively than having to see it painstakingly reproduced.

Goold’s mise-en-scene throughout is terrific. Set in the large white box of a modern partition built office complete with ceiling tiles, with a whole other room wheeled into it at one point, the commitment to creating a series of brilliant images, as well as to textual invention, is admirable. Equally bold is his and co-writer Ben Power’s creation of an entirely new fourth act in which the action of the piece telescopes out even further than in the original, seeing the producer actually becoming part of the world of the characters, before a series of increasingly meta-theatrical scenes present us with the viewing of the “director’s commentary” on the first scene of the play, before a scene in which two actors playing characters looking suspiciously like Goold and Power explain their entire concept for this version of Six Characters... to an executive producer, including an incredibly funny new riff on the number of Hamlets coming into the West End.

While at times it feels as if this extra material might spiral out of control, in fact the final moments bring the whole thing right back to the beginning with an unexpected simplicity that hammers home points about both the nature of art and reality, and about what use they can be in understanding the pain of life.
Posted by Andrew Haydon at 13:06