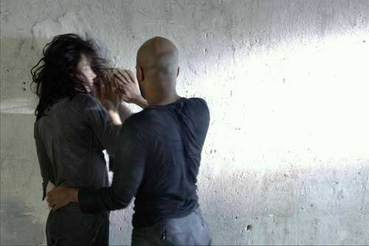 At first glance Nicholas Hytner’s decision to stage a piece of international contemporary dance on the National Theatre’s Lyttleton stage looks courageous in the extreme. Once you take into account the fact that one of the performers and the piece’s co-director/creator is arthouse darling Juliette Binoche, the decision starts to look less like courage and more like an enormous cash cow. Despite this ironclad box office draw, the question remains, is in-i any good?

What Binoche and her co-director/performer Akram Khan offer is an hour and ten minutes of fairly standard contemporary dance moves with a bit of voiceover and a couple of monologues thrown in for good measure. It is performed in front of a giant square wall that was apparently designed by Anish Kapoor. So far, so impressively high-art and cosmopolitan sounding. The piece opens with Binoche and Khan entering around the sides of Kapoor’s backdrop, which is bathed in red light faintly suggesting a continuity from his Marsyas and Svayambh. Their initial movements exactly mimic one another and it is immediately apparent that Khan is a trained dancer and Binoche simply is not.

There is a huge gap between the quality and precision of their movement. When Khan moves an arm or repositions a foot there is absolute assurance, steadiness, and almost observable muscle-memory at work. Binoche, by contrast, makes the same shape, but more vaguely, less definitely. This isn’t necessarily a problem. After all, Pina Bausch has been working with non-dancers for years. Viewed generously, there is something interesting in the contrast between these qualities of movement. Conversely, it seems questionable whether it was a good idea that Binoche’s abilities should immediately be held up for comparison with Khan’s in quite such a forensic fashion.

This mirroring is quickly replaced by one of the strongest sections of the piece: Binoche sits in a chair downstage; flickering lights play on Kapoor’s wall; a monologue about a fourteen-year-old girl falling for a stranger in a cinema, read by Binoche, is played and Khan performs a solo dance upstage, which perhaps suggests the inner life of this unsuspecting paramour. This is followed by some chasing about, which gradually resolves into intimate embraces and passionate kissing.

The scene – and style – changes again. Khan and Binoche are now sharing a small apartment suggested by shadows thrown on the minimal set, and through a series of mildly amusing mimes, tell the story of a woman frustrated by her partner’s inability to lift the seat when he goes to the loo. It’s charming to a point, but pretty much the choreographic equivalent of Men Behaving Badly. Elsewhere, however, monologues about a young Muslim being ferociously threatened by an Imam for falling in love with a ‘kaffir’ and domestic violence seem to suggest more serious intentions.

The way the piece is constructed, with imperceptible jumps between its separate sections, suggests an ongoing narrative. As inconsistencies between characters and places become apparent, it starts to read more as a series of unrelated episodes. Perusal of the programme reveals that Binoche and Khan have in fact created fourteen scenes, each seeking to illustrate one of the fourteen types of love posited by the ancient Greeks. Quite how effective these illustrations are depends on whether one reads the programme before the show starts, since this schematic organising principle is in no way apparent from anything presented on stage. Perhaps allowing the audience to create its own meanings with the material presented is the aim, except that the introduction of voiceover and monologues (both of which would, I suspect, be rejected out of hand by even the lowliest fringe venues without La Binoche being attached to them, let alone staged at the National. The theatre’s literary department – not to mention countless writers – must be wringing their hands in irritation) suggest at least a partial desire to pin down meaning.

Ultimately, this is a perfectly watchable creation. Dramaturgically speaking it’s a bit of a mess, and it almost certainly doesn’t deserve the audience numbers it is going to get. However, if it persuades even half those audience members that they can cope with a bit of abstraction and movement, then it may end up doing the country’s theatrical scene no end of good. It’s just a shame that it is not an especially shining example of the form - a kind of contemporary dance lite - rather than something truly astonishing.
photo by Marianne Rosenstieh
Posted by Andrew Haydon at 14:46