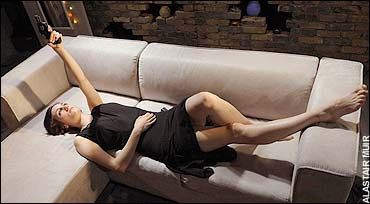 In a sound production, with a fair translation, can Hedda Gabler ever fail to jolt an audience with the visceral momentum of the tragedy it depicts? By its conclusion, this Hedda, despite its problems, still manages to be thrillingly shattering.

The new “modern adaptation” of the Ibsen, written by Lucy Kirkwood and directed by Gate co-artistic director Carrie Cracknell, was always going to suffer from comparison with Thomas Ostermeier's recent astonishing modern dress production from the Berlin Schaubühne, which was shown at the Barbican in February. What is remarkable how well the production does emerge from the comparison. Granted, it was difficult not to watch the production filtered through memories of the Ostermeier, and where the German production managed with extreme economy to leave huge spaces for the audience to study the relationships while absolutely pinpointing moments of realisation and decision, Kirkwood's script and the design of this performance don't allow for anything like the same level of clinical dissection.

While both productions are nominally set in the contemporary world, the Ostermeier version, by staying more faithful to the original text, created a world where the way that Hedda is trapped within her marriage that did at least make sense within the universe of the play, if not necessarily the real world. Here, Kirkwood tackles the whole subject head on. The question is: why on earth doesn't she leave her new husband? She has married someone who, within six months, she realises does not love, who infuriates her, whom she can hardly bear touching her. She is mortgaged to the hilt and yet refuses to get a job. None of this rings true in a modern context, and Kirkwood's only solution is to paint Hedda as an appallingly spoilt snob, refusing work which is “beneath her” while dripping with boredom and ennui.

It is a pity this question is not properly resolved, since much of the rest of this translation is really rather good. Kirkwood displays a real facility for modern speech patterns, and though some of the mildly irritating wackiness more evident in her Bush début Tinderbox remains, a strong dramaturgical hand is clearly in evidence when comparing the published text with the staged version; duff lines have been ruthlessly pruned. That said, “adaptation” seems far too strong a term for the minor tweaks that Kirkwood has introduced. While the language has been modernised, and the locations moderately so, the structure of the conversations, the mentalities and the things the characters speak about – the way that they relate and react to one another – are all still firmly embedded in 19th century Sweden. Kirkwood could certainly have been freer in her “adapting”.

Similarly, Cracknell's direction of the piece, while generally excellent, also feels as if it could go further. In between scenes and when the men go clubbing for George Tesman's "belated stag do", there are some short moments of choreography which add a whole extra dimension to the piece. But they are short. It feels as if Cracknell has dropped them in politely, knowing full well that they are excellent in and of themselves, but at the same time not wanting to upset Ibsen purists and attract the same kind of opprobrium that was heaped upon Katie Mitchell for similar, longer sequences in Women of Troy. Granted that production wasn't to everyone's taste – possibly not Cracknell's – but the presence of the choreography at all suggests that there was a far bolder production waiting in the wings here.

Caveats aside, there are some excellent performances on display here. The cast is pretty much nigh-on uniformly excellent. Cara Horgan's Hedda communicates precisely the mixture of deliberatly provocative seductress, wired fear and almost childlike psychopathy, snapping from cooing and flirting to sudden hard froideur at the mere mention of an unpleasant subject. Perhaps these moments are a little too demonstrative, but she is nonetheless a compelling presence on stage. Similarly, the supporting female roles: Cath Whitefield as the self-describing “frumpy” sister-in-law and Alice Patten as the frantic, brittle ex-, Thea – or 'T' as she is generally referred to – are both beautifully drawn performances.

Christopher Obi's Toby Brack - a ludicrously good-looking, self-assured, black, Oxford-educated lawyer - is relentlessly charismatic, giving no hint of the final revelation of the cynical, exploitative opportunist revealed in the play's final moments. Tom Mison's George Tesman is convincingly attractive and sweet-natured enough for Hedda's initial attraction to be understandable. Indeed, Mison's obvious affection for this kind, loving, mild-mannered academic makes Hedda's contempt for him all the more difficult. His declaration of love for her is genuinely moving and rather than feeling like the net tightening around her impossible situation, we suddenly see the tragedy of his impossible, unreciprocated love for this women whom he clearly adores. Adrian Bower as the brilliant, former-alcoholic genius Eli Longford has perhaps the hardest job, and is a slightly odd bit of casting; coming on like a lank haired, post-punk Jim Morrison – all skinny jeans and unshaved glamour – he looks, and acts, just a bit too rock 'n' roll to convince as a man who has managed to write two academic tomes in the last year, looking almost like he has dressed for his relapse into alcoholism.

However, whatever niggles there are about text and context pale into insignificance at the moment when Hedda hands her suicidal, former lover a revolver and sends him, smashed, on his way. It remains one of the most shocking moments ever written for stage, loaded with cruelty, hope, romance and futility; if a measure of any production's success is the frisson it generates, then the Gate has achieved a production of no mean distinction.
Posted by Andrew Haydon at 14:38

"duff lines have been ruthlessly pruned": the play's final line isn't generally regarded as duff, in any version I've veer seen, heard or read - why on earth is it cut from this one?

Obviously I wasn't thinking of that one. Although it is a bloody difficult one. There is, in the text, a much longer ending - which is apparently to be conducted in silence - but none of it contains the play's final line. I think that was the "adaptation" bit. :-)

Pretty sure the original is set in 19th Century Norway not Sweden. Kristiania (now Oslo). I'm sure the Gate production's well done but I'm not convinced I need to see another production after Ostermeier's. Jaw-droppingly callous (that's a good thing!).