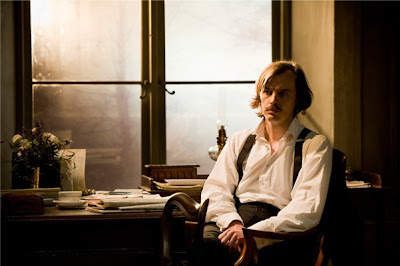 The town of Rosmersholm is in the grip of seismic political upheavals. Free-thinkers and radicals are unseating the long-dominant Conservatives. Caught in the midst of this tumult is Johannes Rosmer (Paul Hilton); living in his ancestral home outside the town, but clearly still exerting considerable influence. Since his wife committed suicide a year earlier and he renounced his faith, giving up his position as pastor, he has been living a life of quiet, chaste reflection with his friend Rebecca West (Helen McCrory). He is a troubled, conscientious soul while she is a passionate friend and committed idealist.

Into this cosy life comes Doctor Kroll (Malcolm Sinclair), Rosmer’s brother-in-law. He is much disturbed at how the balance of power has shifted against the right-wing, and wants Rosmer - a natural Conservative whose family has ruled Rosmersholm for centuries - to edit the Conservative paper, the Standard (“I’m sorry, you want me to become editor of the Standard?” - cue knowing laughs on press night). The trouble is, under Rebecca’s influence Rosmer has tacitly aligned himself with the liberal cause, as espoused by Rebecca’s dead foster-father and Peder Mortensgaard – an adulterer-turned-freethinker who Rosmer sent from the town when he was a pastor. Kroll is shattered by what he sees as a total betrayal, and vows to ostracise Rosmer from society.

This set-up is an absolutely watertight encapsulation of all the themes and events that will unfold over the course of the play. It’s so neatly done it would feel painfully contrived were it not for Ibsen’s skill as a dramatist for making every detail so engaging that the conversations scarcely ever feel like mere exercises in exposition. Indeed the first act’s forty-five minutes whip by so quickly it is a surprise to find oneself at the first interval – the Almeida have inserted two, primarily to facilitate scene changes. In the light of the Thomas Ostermeier’s blistering straight-through Hedda seen recently at the Barbican, and given the cracking pace on display here, it seems a bit of a shame that director Anthony Page hasn’t followed suite.

What Rosmersholm does brilliantly is to slip seamlessly between the political and the personal. Each is irrevocably bound up with the other. And, like their politics, it seems that each character’s tragedy is tied to their emotional inheritance. Paul Hilton’s portrayal of Rosmer as a likeable, honest but naïve man whose former faith and ongoing decency prevent him from ever being happy is a beautifully measured performance – radiating compassion and a desire to do right even as his world starts to burn around him. McCrory’s Rebecca is equally impressive. Dressed in a blonde wig and (I think) blue contact lenses – looking unexpectedly like Nicole Kidman – her physical transformation is just a small part of an incredibly nuanced depiction of a woman who could easily be turned into little more than a display of histrionic fireworks. Instead, the clash between West’s committed intelligence and her desires becomes a drama all of its own.

Malcolm Sinclair’s Kroll is slightly less controlled, offering more stagey bursts of anger and red-faced, eye-bulging Tory fury. It works to an extent as a picture of a certain sort of patrician, but reduces the power of Kroll’s arguments and the depth and dignity of his beliefs. Worse is Paul Moriarty as Ulrik Brendel, whose entire performance seems to have been largely informed by the throwaway comment that Brendal has been working as an actor in the north since being fired from his position as professor. Moriarty offers pretty much every cliché of Ageing Thespian Soak in the book, as well as some incredibly annoying drunk-acting. This could be a matter of taste, but it had me grinding my teeth in irritation every time he opened his mouth. Far better is Peter Sullivan as the radical, Mortensgaard, offering a laconic, amused, wryly bitter man, oddly reminiscent at times of the late Bill Hicks.

While the politics of the play are clearly an important part of the play, offering a critique of radicalism and the behaviour of radicals just as stringent as its attack on the right, it is the play’s romantic tragedy that really grips. In the course of trying to achieve her goals, Rebecca West makes a series of catastrophic miscalculations, while Rosmer’s trusting nature allows him to sleepwalk unsuspectingly toward his own destruction. The love between them seems to blossom precisely because of their impossible circumstances. The final act, in which they circle one another warily, unable to reconcile themselves to happiness, almost perversely determined to bring about a catastrophe, is agonising to watch. The sheer extent of their love, and the appalling impossibility of it achieving a happy resolution, makes this final act quite hauntingly beautiful. The spectacle of two people who had tried to change society being ultimately undone by it is horrifying. The final moments, though perhaps a little overwritten and over-played, remain a beautiful, bleak hymn to the overwhelming power of desire.