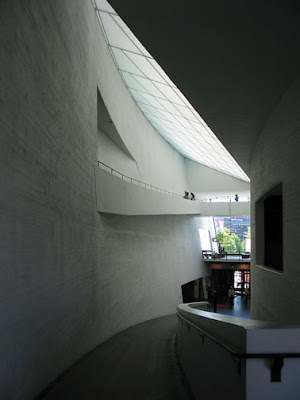 Ok, here’s a question: should theatre criticism necessarily include an assessment of whether or not a piece of theatre is good or bad?

At time of writing, Postcards is flying over the North Sea on its way back from another of its increasingly frequent overseas junkets (another two coming up in the next month or so), this time returning from Finland where the third of the Festivals In Transition (FIT) MobileLab workshops series was hosted by the Baltic Circle Festival in Helsinki. Having not been to the second MobileLab a couple of weeks ago in Cracow, apart from anything else, it was lovely to be reunited with many of my friends and colleagues from Munich, and to meet a number of new additions to the expanding circle of MobileLab participants.

It was also great to be flung back into this series of incredibly challenging and rewarding seminars. Theatre criticism, as I may have noted before, can be a bit of a lonely old job. After all, while most people go to the theatre for fun and can go to have a meal or a few drinks afterwards, theatre critics go because it’s their job and, if they’re doing their job properly, often have to go straight home afterwards and write it all up; so it’s great to get to spend whole days in the same boat as people who are in the same boat as you.

MobileLab has the added advantage of having gathered some of the brightest and most committed young writers and thinkers about theatre that I’ve met, from across a massive stretch of northern and former Soviet Bloc European countries. As a result, alongside the shared articulate, intelligent, informed passion for theatre, there is also a healthy disparity in what we all mean by ‘theatre’ and in our approaches to writing about it.

The Helsinki seminars were led by a Slovenian critic, magazine editor, thinker and all round great bloke called Rok Vevar. If the workshops in Munich run by Lyn Gardner were challenging – and they were – they did for me at least have the advantage of being challenges to the traditions with which I have grown up. What was fascinating this time was that Rok’s thinking on criticism starts in an entirely different place. In the first discussion we had as a group - establishing what we would like to cover in the forthcoming sessions - there quickly emerged a real schism between critics who felt that an actual judgement of a play’s success or failure was not the aim of theatre criticism, and those (including myself) who couldn’t quite sign up for such a radical departure (at least as far as I saw it). The discussion did get a little bogged down in semantics with one Finn, who was both a performer and a critic, insisting that ‘judgement’ was unnecessary, making it easy for those in favour of saying whether pieces were good or not to score points by noting that, while subjective, ‘judgement’ was necessary at every step of the critical process.

However, lexical choice aside, the division remained between those who said that criticism should say whether something worked or not, and those who said that critiques should essentially offer (admittedly necessarily subjective) interpretations and explanations of the work presented. The following day (?) – or possibly after one of the numerous cigarettes breaks necessitated by having a roomful of nicotine addicted writers starting to loose concentration and grind their teeth pretty much every hour or so – the discussion turned to the first performance we had seen as a group, Büro Für Zeit + Raum: Past is in Front of Ego (review or at least write-up to follow in the next day or so). None of us had been especially impressed with the piece. I had snoozed for a good ten minutes at the start until it stopped repeating itself and anything happened. It was, as one of our number put it, a collection of every cliché of contemporary dance imaginable – “the movements that people put in theatre pieces when they want to have some movement sequences”.

Nonetheless, the piece was discussed. And once we had moved past registering our myriad grumbles about it’s vacuity, lack of technique and overall emptiness as an experience, we started discussing what it might have meant; what it was actually *about*. And then the discussion started to get properly interesting. There had been a pretty general consensus about its failure. We hadn’t been moved or especially enjoyed it. The discussion of its possible meanings was of a whole different order. Rok offered a startlingly eloquent explanation of the piece, interpreting the meanings of various movements and sequences, deftly invoking Lacan and Zizek, the history of dance notation, and ideas of the self-narrating subject whose present and future are defined by their past (or something like that. I’m having one of those moments of feeling comprehensively out-flanked intellectually, but in a nice way).

In short, Rok made the piece fascinating. Even though he hadn’t liked it at all, he had the mental furniture available to offer an analysis of the piece that was far more interesting than watching the piece had been. This immediately raised the question, if we had read Rok’s analysis before we had watched the piece, would we have enjoyed it more? I would argue not. Certainly there would have been more to think about, and his hugely persuasive commentary on how to *read* it, if it had been digested before, could have opened up a possible path through which to follow the piece. And yet, Rok hadn’t particularly liked the piece as he watched it. Even while sitting there, synapses apparently exploding left, right and centre, he hadn’t thought much of the thought behind the piece or the execution.

My concern was, then, if one presents simply beautiful interpretation of the piece without any mention of the fact that it isn’t much fun to watch, one isn’t doing one’s readership any favours. As I said in the seminar, I’d have far rather watched Rok’s analysis than the actual piece. As a result, aren’t people going to be seduced into seeing work that isn’t much fun to watch by persuasive critiques filled with high-quality thought that fail to mention that while the critic has an extraordinary brain they were also pretty pissed off by the work in question. After all, the “is it good or isn’t it?” question is no more or less subjective than the reading they are offering, so it isn’t a matter of additional authority being assumed, it is simply a question of whether or not it should be deemed relevant.

All the while that I was arguing that whether or not one enjoyed a piece is central to any subsequent explanation of it I was dimly aware of a slight feeling of unease that perhaps criticism had been way too co-opted into the PR industry. Have British theatre critics, along with pretty much every other branch of journalism, been tricked into moving away from serious analysis and into giving things the thumbs up (where possible) in order to sell tickets? I’m not suggesting any sort of grand conspiracy, but, as far as theatre PRs go, aren’t the occasional raft of poor reviews worth taking on the chin so that the raves can be harnessed to sell tickets? After all, while some shows might take an absolute pasting, there are plenty of others that can be larded in quotations plastered over every available bit of space in front of the theatre. This would be harder if the reviews in question were lengthy interpretations invoking Zizek and Lacan. While I still ultimately believe that it is the job of the critic to report and describe, the concept has certainly given me a lot to think about.

When compared with a rigorous, extensive and articulate interpretation of a play, the way that some British critics simply shut down and refuse to engage with writing or direction that they have decided is nonsense starts to look like the heights of ignorance. It looks like they don’t understand, and more than this, they don’t care that they don’t understand, and furthermore, that they don’t care not understanding – parading their ignorance as if it were a gold standard for understanding theatre. On the other hand, the elephant in the room here is that this interpretative school of criticism could of course fall prey to finding meaning where there is none – dignifying work with little or intellectually negligible thinking behind it with critiques so intelligent and eloquent that the work seems ultimately vindicated when it would perhaps have benefited more from someone pointing out that it wasn’t half as clever as it thought it was.

All of these musings do make me wonder what it is in our national psyche that makes us so suspicious of being *caught out* or tricked by tricksy intellectuals; why we prefer to see pseudery everywhere rather than allowing for the fact that some ideas might actually be quite clever. Indeed, there’s an example par excellence at in the comments section under my review of The City where the (necessarily) anonymous commenter says: “It's the exercise of a fine critical vocabulary in the service of an artistic vacuum - or "French", as it's sometimes expressed.” It’s a good joke, and achieves laughter-of-recognition at exactly the same time as making me rather sad that we Brits don’t seem to have much of an intellectual culture of our own, perhaps partly *because* we prefer to define ourselves in opposition to those who do.

In many ways, partly because of this lack of a serious intellectual culture in British public life, having a more creative, interpretative critical culture wouldn’t make much sense as there simply aren’t that many plays being produced that would benefit from such rigours being applied to them. While say Martin Crimp and Howard Barker might enjoy such a regime change, current critical favourites from Alan Bennett to Roy Williams would find themselves left a bit out in the cold. The fact of the matter is, not much British theatre is actually very arty. It wears its messages and meanings plastered all over its sleeves and generally prefers to offer stories that anyone can readily understand with messages that it would take serious concentration to overlook. I generalise, but not by much. At the same time, this divergence of critical thought does explain why both Crimp and Barker, not to mention Sarah Kane and Mark Ravenhill, receive so much warmer receptions on mainland Europe than in Britain. It also provides the answer as to why so many normally intelligent, thoughtful British critics treat work by some of Europe’s more successful but idiosyncratic directors as if it is something to be debunked and dismissed.

So, I’m interested to see if there is a synthesis possible. Without wanting to lose commissions because I’ve suddenly started writing dense philosophical treatises and started refusing to give star-ratings, I am interested to see whether it is possible to involve more interpretation in reviews while at the same time still letting readers know whether the damn thing is actually worth seeing or not. That said, if you happen to see “A confrontation between idealism and materialism expressed in Lacanian terms between idealism's purported ability to theorize the All versus a Materialism's understanding that an apparent All is really a non-All” - Andrew Haydon, Time Out, plastered across a fringe theatre near you any time soon, you’ll know I’ve succumbed to continental drift.
Posted by Andrew Haydon at 13:19