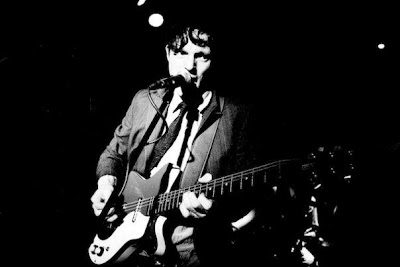 Postcards has gotten a bit text heavy in recent weeks, so by way of a diversion before getting back to the serious business of writing far too much under-edited rambling about theatre and criticism, it's time for a photo-heavy plug-fest for my favourite affordable live band – The Official Secrets Act. The above photo comes from a magazine called Noir et Blanc, which has a Facebook page here and looks like a real triumph for the extreme use of Photoshop's contrast function.

The band are playing the Buffalo Club on Highbury Corner tonight and hopefully they'll be headlining so that those of us enjoying three hours of Ibsen down the road at the Almeida will be able to whizz down afterwards and dance away some of the inevitable Nordic blues such an experience is liable to engender.

As well as the inevitable MySpace page, their second single, Victoria, has just been released and their best song, The Art of Being Sure, can be found in a live version from an earlier Buffalo Club gig on YouTube. Pretty much the definitive break-up song of the decade, youthful verve and passion doesn't get much better than this...

(the usual qualifications about videos of live performances apply in triplicate)
Posted by Andrew Haydon at 14:50

I totally second Art Of Being Sure as their best song. I'm lobbying for it to be next single!!

It is certainly the single with which they should break into the popular conciousness. I'd say possibly when they've got the album ready to go, though.

Ironically, they started playing at roughly the point when Rosmersholm came down, and so I didn't see the gig. :-(

I love this band! All their songs are quite distinct... but I agree that Victoria is far from being the strongest. The single is worth buying though as it comes with an amazing b side: "Sell, Sell, Sell". I love this track!

I interviewed the band a couple of month back for a music magazine and they're just SO nice! They're nowhere as pretentious as most bands of similar genre! They are just 4 friends who are very much into their music and want to polish every song to perfection. If they'll succeed they deserve it so much!