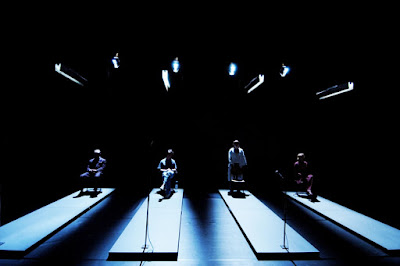 It’s funny, isn’t it? If you’d asked me on Wednesday what I thought of Alice Birch’s Revolt. She Said. Revolt Again, I’d have probably told you I liked it very much indeed. Indeed, I’ve even emailed copies of the script to a bunch of colleagues/dramaturgs/critics in other countries who want to see what radical writing for the stage looks like in Britain. And I think I stand by that assessment. I think I still think that Revolt is a really interesting, difficult text for the stage. I like it because it presents a problem to its director. There is no clear way to stage it, there are no easy answers on the page. Indeed, it might even remind me a bit of Elfriede Jelinek (my favourite stage direction by that Austrian Nobel Prize for Literature-winning playwright is: “[long suggestion for a staging] But I am sure you’ll come up with something completely different.”). On paper, the piece feels full of possibilities, uncertainties, questions, ambiguities...

I am not a huge fan of this production, first made by Erica Whyman for the RSC in 2014 for their “Making Mischief” [or “Midsummer Mischief” according to a different part of the RSC’s website] season, “inspired” by the Laurel Thatcher Ulrich quote/book-title “Well-behaved women seldom make history.” Birch’s text proclaims “This play is not well behaved”; sadly, the production really, really, horribly is. The moment that crystallised this feeling for me – more that the horrible, horrible ersatz, polite, pretend *faux-“German”* stage mess, or the stolen Ostermeier Crave starting set WHICH IS THEN IMMEDIATELY ABANDONED* – was very close to the end when an audience member’s phone went off. Loudly. Twice. And this “not well behaved” play broke. The actors faltered slightly, looked up a teeny bit – even while pretending to be in the same room as us, and talking to us, and engaging with us and in front of us – but then politely ignored the phone, pretended nothing had happened, brought down the shutters of the fourth-wall house that they’d been in all along, and carried on with the nice game of make-believe.

There are some shocking things in the play. (Not “shocking”, what is? We’re all immune to everything now. How else could we live? But powerful reminders of how horribly women are treated, nonetheless.) But the only thing that actually made me angry was the exposure of this lie.

– As Žižek says, people only get angry when something they know, and are pretending isn’t happening, is forcibly exposed –

As such, you’d think that Revolt would also make one angry, by dint of its continual revelations of brutality against women. And perhaps at moments it does – the savage section on how to avoid being raped by making yourself constantly available is bitter, brilliant irony at its best. But instead it is hijacked by the audience. The first half, at least, winds up playing like a very right-wing satire of radical feminism. The audience laugh *at* the radicalism. The Noel Coward accents and tone of the production don’t help. There’s so much “liberal” self-hate chucked into the mix as well, that people who really do hate “well-meaning” posh, Southern-English liberals (most of yesterday’s audience, by the sounds of them) really get to have their prejudices confirmed. The second half of the piece maybe loses that audience, but, Christ on a bike, it feels like a choppy 1hr10. For a good long while, it felt like a comedy night a Edinburgh’s Conservative Association. (Which is not, I preseume, the intended effect.)

But maybe this is the shape of post-Brexit theatre to come. Old people, lured by the RSC’s reassuringly reactionary brand, braying their approval at [what they readily perceive to be] mockery of the now-defeated liberal metropolitan elite’s stupid values.

At the same time, the text is in part inspired by Valerie Solanas’s SCUM (Society for Cutting Up Men) Manifesto, the kind of Mein Kampf of feminism, which calls for women to “eliminate the male sex”... [Maybe Mein Kampf is too harsh. Maybe it’s more The Turner Diaries], but it’s more or less impossible to engage with the text via this production of it, because aesthetically it’s such an abomination.

I think I still like Birch’s play, but this production wants so hard to be liked, to not alienate a single person, to be ingratiating and “entertaining”, to “give everyone their money’s worth...”

And, y’know, seeing the text performed did at lest make me notice some things about the writing that hadn’t struck me in reading it; the use of recurring images and motifs – the bluebells, the nightingales, the cut off fingers and tongues; all horribly evocative of Philomela and Lavina... But, my God, it’s a hell of a battering the play takes to reveal these few, small insights.

FWIW, I don’t think there’s anyone “to blame” for this. It feels more like a confluence of so many all-too-common factors in British (perhaps “English”) theatre. Their depressing repetition here – the literalism, the conservatism, the visual illiteracy/timidity, the physical non-presences, the hideous politeness – maybe just feels worse because they’re such a kick in the teeth for what the play could be.

In short, this is the sort of production that made me leave England in 2009. I wish I hadn’t seen it. It’s awful. Just the worst. I thought we’d stopped making things this bad, or at least that I’d got better at missing them, but no. Hideous. The worst thing I’ve seen at this Edinburgh Fringe, and made by the highest-funded company here. Ironic. Avoid like the plague. *I mean, yes, sure, it’s amusing to put a picture of Ostermeier’s Crave at the top of this review instead of a Revolt production photo [directly above], to point out how similar they are. But the advantage of Ostermeier’s Crave (2000) was that they stuck to that stark, difficult aesthetic. Revolt devolves into a series of sub-Stafford-Clark sock-puppet-theatre encounters under the world’s most boring lighting plot within one scene.
Posted by Andrew Haydon at 14:37