[a manifesto for post-Trump theatre] 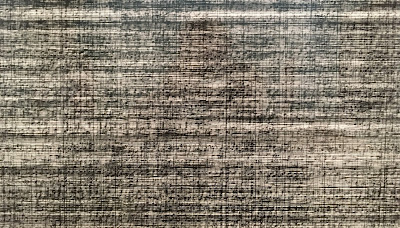 “[W]hat theatre in general also needs to do is to change the way it is accessed by both audiences and artists, how it is structured, how it is resourced and what kinds of work are resourced or not resourced, valued and not valued. That may well require facing up to some unpalatable truths about how theatre is perceived by the vast majority of people...”

Lyn Gardner, Theatre must speak to the nation – and listen to it.

This year, seems to have been a year of victories for the-further-right-than-normal. So much so, that no one even understands the labels “left” and “right” any more.

In the summer, in Britain, there was a massive popular vote to award the National Health Service £350 million a week. This has somehow been interpreted as a victory for neo-Nazis and NHS Privatisation.

In the autumn, in the USA, there was an overwhelming vote against neoliberal complacency, which has somehow been interpreted as a victory for neo-Nazism. We (on “the left”) are nothing if not addicted to The Threat of Nazisim. Just as “the right” is addicted to its fear of “Socialism” and/or “Communism”.

In both votes, the actual views of the voters – the compromises they made with the bits they didn’t like – continue unknown. All we know is the result. And in each case the actual result itself remains confused. “Brexit” doesn’t know what it is, or how it’s meant to happen. And much the same seems to be true of Donald Trump; a man who seems to have promised almost everything to everyone, and who seems vaguely convinced that this is a thing that it’s possible to deliver.


Here, “on the left,” the weird accusation that has gained most currency in recent months is that “we live in an echo chamber”.

This is – respectfully – utter bollocks.

I’ve already written about this once, but I’m going to keep repeating it until people stop saying it:

What we do is disagree.

It seems to me that “the left” (which is by no means all the people who disagree) is particularly prone to agonising about its failings. Seeing evidence of this on “the right” is a lot more rare. I mean, for Christ’s sake, they’re a party of millionaires cutting benefits to the poorest in society because their ideology tells them it’s the right thing to do. And yet apparently all they have to do is toss off a casually worded accusation about our being rigid ideologues in an echo chamber and we’ll break off from challenging them for several weeks to sink into an ecstasy of navel-gazing.

How about we remember that actually: a) we do know what their arguments are, and b) We’ve. Rejected. Their. Arguments. Because They. Are. Wrong.


So, to return to Lyn’s piece;


“[Theatre...] may well require facing up to some unpalatable truths about how theatre is perceived by the vast majority of people...”


Well, sure. It’s easy enough to imagine worlds where “theatre” is seen as:

But then, it’s also possible to envisage it being seen as:

And none of this seems to stop anyone wanting to go and see Harry Potter and the Cursed Child. [Things that might actually stop people seeing it are: it’s in London; it costs money; it’s only playing to 2,000 people a night and there are 65,111,143 people in UK (not including tourists).]

I don’t think it’s unreasonable to assert that most theatre in the UK is pretty much squarely in the middle of both lists of accusations. Too left-wing for the extreme right, too right-wing for the proper left. And far too remote (physically) for far too many fucking people. (As someone “on the left”, I think it could certainly do with starting to be all the things that “the right” accuses it of, but it’s nowhere bloody near them at the moment.)

My list of reasons not to go to the theatre in England is as follows; it’s:

Obviously, #NotAllTheatre. But I bet you all know what I mean, right?  < dog-whistle >

And all this assumes that you even have a theatre within reasonable reach...

You’ll notice I’ve stopped talking about “politics”. That’s because this is theatre.

I think Political Theatre in Britain is (largely) fucked.

Or at least, it’s fucked when it (largely) consists of someone reading a story in the Daily Mail and writing a play aimed at changing everyone’s mind about it through a series of laborious scenes where characters argue about it.

[No rules, though: Now I’ve described it, I can totally imagine someone doing just that and it being the most thrilling thing we see next year.]

In short, the idea of theatre is only off-putting if we let it be.

The best way of avoiding that is not to make theatre that conforms to what we’re told it is, or that sets out with someone else’s definition to disprove. Politics return to theatre most strongly when theatre stops addressing a particular news cycle directly (because to address the news cycle is to adopt the agenda, to accept the premises of a pre-ordained worldview.  I often think the thing I’d most like to see is people putting on any random (maybe ideally historical/canonical) play, and just saying that it’s “about immigration/racism/the rise of the far-right/the financial crisis/etc.” in all their blurb. The play doesn’t have to be “about” those things at all).

Sure, the word “theatre” is fucked. It’s been around for too long, and it conjures unreliable images in the heads of anyone who hears it. It can be an exercise in negative association a million times before it means something positive. Probably best to avoid using it in your promotional literature, and if you’re lucky/unlucky enough to be working in a building that is actually called a theatre, just for Christ’s sake don’t make what you think you’re expected to make in there.

I still believe that most people are better than we suspect or imagine them of being. No, sure, not everyone likes the same things – not everyone even agrees that Cleansed was the best thing since Alles weitere kennen sie aus dem Kino, for example – but at the moment there are still quite a lot of theatres (and many, many more empty warehouses, back-rooms of pubs, and, hell, each others’ flats and houses...), and no one’s saying it all has to be the same.

I mean, yes, Cleansed was one of the best things I saw this year and it had a lot of resources, but another was Three Sisters, in Maribor, performed in the cluttered room above a café using natural light and a guitar amp/iPod. You hardly need resources to be utterly brilliant, but resources aren’t necessarily deadening or awful either. Anything can be a positive virtue if used intelligently.

From my perspective, the last thing we want to be doing is making art to please right-wingers, though. They don’t like it? Good. If there’s a challenge, it’s making art that’s so good that people feel they have to change themselves in order to be able to appreciate it better; not pretend-“art” that bends itself to what people already think that they think. Try assuming that people might be interested in hearing new ideas instead.  Try having new ideas.

The Stage: nothing right or left, but claiming makes it so?

[written for The Stage] 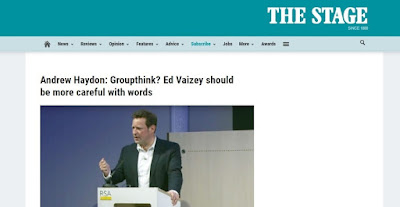 Wrote a piece for The Stage looking at Ed Vaizey's use of the "left"/"right" binary in a recent speech, which happened to accord with some stuff I've been thinking about.

If you're lucky, I might stick up the first draft at some point, which was written in response to just the reported News version of the lecture (i.e. three or four lines quoted out of context), which is *very* different.

(Oh, and in the subbing-process, my description of Munira Mirza as a "contrarian Marxist" and link to her CultureWars review of The Globe's 2005 Tempest as evidence got lost (rightly, they made the sentence unfeasibly ungainly) so consider those a bonus for reading here. :-) )

[N.B. I've "improved" the original Stage headline in the above, "cover-photo" screen-cap.]

Posted by Andrew Haydon at 11:59 No comments: Links to this post