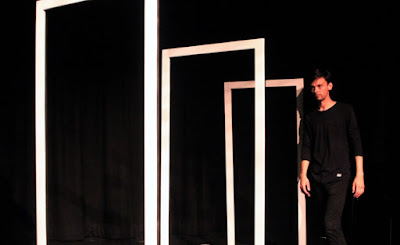 Isn’t student theatre brilliant? By total coincidence, I first met Luke Kennard through when he and some friends from Exeter University brought their (as I remember it) brilliant surreal comedy, The Freudian Slip, to the National Student Drama Festival in 2003*

As a result, I’ve known his poem, The Murderer for probably over a decade now**. Even so, it still feels surprising when “that poem by our mate, that we used to make him read at parties.” Kennard reads the poem brilliantly, I think:

What I hadn’t particularly factored in, therefore, was the extent to which I’d always associated the relationship between the murderer and the narrator of the poem as one of Actual Luke Kennard and A Murderer (whose appearance I’d never fully finalised).

What was most immediately startling in Clown Funeral’s piece, for me, therefore, was the fact that the “Carer”-for-the-murderer here was a young woman. [I’ve subsequently been told that the company has five performers, who play the three roles in rotation, irrespective of gender, do it was sheer chance that I saw the configuration I did. I’m not sure what this does to my overall understanding of what/how the piece means, though. Not a lot of the things I thought it did, obviously. It also means I feel like I need to see another couple of versions...]

There are also a load of other extrapolations from the poem – obviously there have to be, the poem itself is only 24 short lines, the show is 55 minutes long – with which the company gently but firmly wrest control of the poem from my memories of it, and establish it as theirs, at least for the duration of the show: we’re maybe a short way into the future, where the post-prison rehabilitation of murderers has become some sort of government/privatised scheme whereby volunteer(?) carers take the murderers into their homes, as halfway houses. It’s an interesting idea; partly because it fits well with the already strange tone of the poem, but also because it seems to tap into some sort of idea of society and government which, while neither directly satirical, nor immediately urgent, seems somehow “true” on some level. “True” in perhaps the same way that Nineteen Eighty-Four and Brave New World seem “true” even if they’re not.

Indeed, the whole production is a bit like that. It feels almost like it captures the essence of “Classic Student Theatre” (and I mean this in an entirely positive way). It’s got three door-frames of differing sizes that can be (and are) wheeled around the stage; it’s got performers being on opposite sides of the stage facing away from each other but interacting (why *is* that a convention?); but most of all, it’s got this kind of timeless NF Simpson/Pinter/Stoppard/Beckett surrealist essentialism. Like, if there was a default mode for absurdism, this would pretty much be it. And it’s strangely lovely to see it again. In a year where so much of the best work at the Fringe is painfully contemporary and politically urgent, it’s actually kind of glorious to spend an hour musing with something a bit more abstact about the human condition.

Having The Carer played [on this day] by a woman (cast names? I can’t find ‘em) also has the interesting effect of making the whole read a lot more like a relationship drama. (Now, yes, I know that’s wildly heterosexist of me, but then, maybe it’s also a) deliberate/deliberately-ambiguous, and b) more to do with the domestic set-up, in which the same would perhaps apply to the two men, neo-Platonism-style [now see square-bracketed note above...]).

As recent graduates from Warwick, they perhaps suffer from that albatross of an article (see link), which I wrote about their alma mater last year. They’re not Breach, Barrel Organ or Walrus, but nor are the trying to be. This is still distinctive, really rather impressive post-student theatre, and well worth a look, I think. All the more so for its not being poundingly, thumpingly *URGENT*. Not everything about the human condition demands *URGENCY*, sometimes a bit of quiet, wry reflection can be pretty great. I reckon that’s what we get here, and I liked it very much.


Full text of The Murderer (the poem) here.

*The same year as How To Win Against History and Heads Up director Alex Swift’s award winning production of Bedbound (starring Khalid Abdalla and Cressida Trew), and Matt Trueman’s first ever published review in Noises Off, aged 17, fact fans.

** Indeed, one set of Kennard’s Wolf poems in I-forget-which-volume is dedicated to Alex Swift’s wife, Lily Einhorn, after she did a beautiful reading of the first Wolf poem on (if I remember rightly) the hungover morning after my 30th birthday party [I know, I know; we sound like the nauseating set-up for a Simon Gray play.] The net result of all of this is that Kennard is one of the only modern poets whose books I buy as soon as they come out and buy for other people as presents. (Give or take; I haven’t bought Cain yet. But I should.)