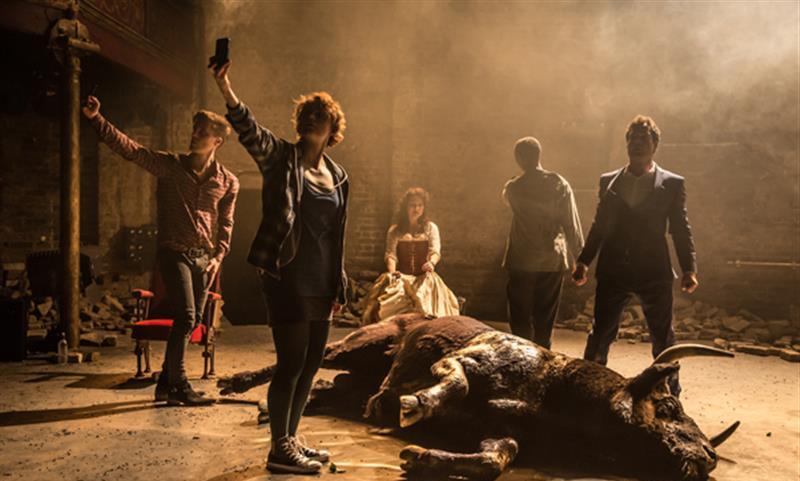 Simon Stephens’s Carmen Disruption is a play of echoes and fragments. It exists in this form because the form precisely mirrors the worldview. It veers between the public and the private; between impersonal facts and personal perspectives. It is a play about Europe that it about the world. Fittingly, then, my relationship with the play is already both public and personal. I first read Carmen Disruption sitting outside a café in the autumn sun in Berlin, 2013; I first saw it, directed by Sebastian Nübling, at Deutsches Schauspielhaus, Hamburg, in 2014. This seems important to mention, firstly because each version has differed so much from the last, and secondly, because it is very much a play set in “Europe”. Watching it at “home” is a very different experience again.

But I’m getting ahead of myself. You want to know the basics: each incarnation of Carmen Disruption is a set of five intercut monologues with a chorus. The voices of four of the monologues are essentially modern versions of four characters from Bizet’s Carmen. The last is that of The Singer, a character “informed by lengthy conversations with the mezzo-soprano Rinat Shaham”, who, like The Singer, has played the role of Carmen in dozens of productions in dozens of cities across the world. In the Hamburg production The Singer was played by Rinat Shaham (she’s currently in New York. Two weeks ago she was in Berlin). The chorus, on paper, is something like the voice of the city: newspapers, announcements, trends, zeitgeisty thoughts; the sound of the crowd, the murmur of the Platz der Republik. In this version the chorus is played by the mezzo-soprano Viktoria Vizin and a surtitle machine.

Having seen the text of the piece go through so many iterations, it almost feels like the stories it tells could be anything at all. Of course they couldn’t. The shock of narcissism and violence of the rent-boy Carmen, the near-suicidal despair of the jilted student Micaela, the low-grade criminality and reconciliation with estranged child of the (now female) cab driver Don José, and the criminality on a global scale of Escamillo’s financial career all build – in the same way as Wastwater built – into a very particular elliptical sketch of the modern world. Indeed, it was in Wastwater that Stephens first introduced Habanera from Carmen as a kind of synaptic device, an almost inaudibly hummed motif running between its disparate parts; the tune carelessly hummed by the woman having the affair in the Heathrow hotel room.

Carmen Disruption is, once again, Stephens exploring that vision of Europe that – after the section “A Tragedy of Love and Ideology” in Attempts on Her Life – I unconsciously think of as Crimpland. As I say; echoes and fragments. In Escamillo’s painstaking morning routine we are perhaps reminded of Rupert Goold’s production of American Psycho. In the jarring descriptions of online pornography we’re back to that Heathrow hotel room in Wastwater. Even, eighteen years down the line, we can still perhaps hear Larry from Patrick Marber’s Closer mumbling that “everything is just a version of something else.” Hell, even just as an encapsulation of my last week or so of theatregoing, Carmen Disruption is ludicrously resonant, from the Crimp opera, through to the Hofesh Shechter Royal Ballet show.

Michael Longhurst’s production here immediately joins the ranks of the most fully, beautifully realised productions of *anything* I’ve seen on a British stage. Lizzie Clachan’s design is, by turns, brassy, subtle and glorious; and above all, a great *Almeida* design. We enter the auditorium from the stage, and so see the auditorium has been dressed as one of those great European chocolate-boxy national opera houses of the late 1800s, while the stage itself is almost empty save for additional bricks, rubble, and, centre-stage, the carcass of a dead bull. (Like I said ages ago, bullfighting is definitely This Year’s Image, and *obviously* Carmen has it in spades). Of course, in the context of *Europa*, the bull also has an additional context which also finds its resonance here. The rubble of European capitals also presents that dual sense of the – still – ever-present aftermath of WWII that you feel in any European capital, and at the same time, that allied feeling of property development, of state and nation giving way to globalisation; industry giving way to Capitalism, factories and warehouses becoming desirable loft-style apartments and multi-purpose arts centres. All these ideas present in the text are reflected in the design.

And, as with the design, so is the whole atmosphere of the show – through dramaturgy (Pia Furtado), movement (Imogen Knight), sound (both the sound design: Carolyn Downing and the original score and musical direction: Simon Slater), and light (recent Katie Mitchell regular Jack Knowles here furiously channelling Lee Curran) – somehow a sculptural version of the text. The use of two live cellists alongside the recorded booms and crackles of city life, the use of striking actual dance moments, and the sheer intelligence of the edit done on the script all deserve massive credit.

One could make one or two minor quibbles: the movement feels like it could be a bit more integrated – ; the young student *isn’t how I imagined her* (the dumbest possible objection – Katie West’s performance is perfectly excellent *of itself*, but apparently her German counterpart’s version stuck more than any of the others, being less plaintive and painfully, almost embarrassingly, sincere, even in the midst of her self-ironisation); and occasionally Stephens’s op-ed voice sounds a little too clearly – financial toreador Escamillo does at times sound like he’s just delivering the lecture on the catastrophe of capitalism that Simon would, were he a columnist not a playwright. But these are personal trifles. Things that struck *me*, rather than real or damaging dramatic flaws. Instead, there’s much more to enjoy here – both rent-boy Carmen (Jack Farthing) and banking Escamillo (John Light) are brilliant dramatic creations, and both beautifully rendered here. Light’s reading especially notable for its broad, hilarious take on E’s astonishing lifestyle pomposity.

But really, it’s the way that the whole works, rather than individual elements, that make this creation so strong. The fullest set of ideas and resonances from the script have been picked up and expanded on exponentially, creating an incredibly rich intellectual synaptic tapestry.

In my review of Carmen Disruption in Hamburg I said “with Three Kingdoms, Sebastian Nübling and Simon Stephens changed a generation’s idea of what British theatre could be.” It might be opportunistic to claim that this production is proof of that promise, but it doesn’t seem entirely fanciful. What is spectacular about this as an achievement, is that it feels entirely organic. It’s not “influenced by” Three Kingdoms. At all. (I realised writing this that I saw my first Michael Longhurst show a decade ago this August: the intercut monologues of Peter Morris’s Guardians, and he was bloody good back then.) Instead it feels at once completely British (the acting, the costuming, the attention to realism and detail), as well as completely “European” (the cross-disciplinary verve, the abstraction, the dramaturgy, the precise-yet-conceptual design). Finally, it feels, we are making work that demands work in return. And aren’t afraid of making something that is beautiful as a way of examining the gritty and grubby.

Oh, and the final moments, attributed in the printed text to the Singer, but here delivered by surtitle, seem at once to define the entire production, say something more than just that, to make sense of the whole piece, and yet be saying almost nothing at the same time. Or rather, refusing to spell out what it is they’re edging towards. To have even an empty stage give you goosebumps is thrilling theatre indeed.