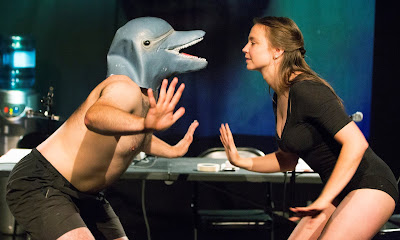 Breach Theatre’s follow-up show to last year’s The Beanfield is, if anything, an even more impressive bit of alt.theatrical thinking than their trailblazing debut. Nominally, it’s about the moderately famous story of Margaret Howe Lovatt, who was part of a Nasa-funded experiment with dolphins in 1960s America. The usual take-home from that story is about the “love affair” (or inter-species copping-off) between Margaret and “Peter” the dolphin. Using this prurient headline as a starting point, Breach (here: Dorothy Allen-Pickard, Billy Barrett, Joe Boylan, Craig Hamilton, Ellice Stevens, Victoria Watson) take the entire narrative apart – imagine Forced Entertainment doing Martin Crimp’s Attempts On Her Life about dolphins – deconstructing the usual cultural and gender narratives around the thing, and also chucking in so much Quentin Tarantino-style (and referencing) soundtrack, that even the way The Sixties are usually constructed is taken to pieces.

As a result – well, this is probably masses of confirmation bias, but... – without ever stating it, Breach have come up with pretty much the most comprehensive critique of American Cold War cultural imperialism, imperialism generally, gender relations, and power relations that I’ve seen at the Fringe (or anywhere for a while, possibly). Perhaps I imagined it, but most of all, it seemed also to be a really radical commentary on race relations in America. By the end, Joe Boylan as “Peter” the dolphin was wearing white lipstick (which – is it too much to note – is part of blackface make-up?) and performing Godknowswhat sort of burlesque of Godknowswhat. I mean, the research lab was on an America island in the Caribbean, the dolphin stuff all happened, the story isn’t so much a metaphor for anything as just a real, concrete, solid example of it.  About halfway through, you just get this horrible sense of humanity (but particularly America), being this massive child that will accidentally rip the wings off any given butterfly and then look surprised when it dies...

And, perhaps it’s just me but, the piece also anatomises brilliantly the problems of failed intersectionality, or, put more simply: the oppressed woman oppresses the dolphin. Arguably. I mean, it’s not a perfect metaphor, for the simple reason that humans are land-based bipeds and dolphins are sea-based mammals with fins; there are more insuperable obstacles between human/dolphin interaction than there are between different human genders or cultures, and there’s a slight danger, I found, in trying to overthink the implied/metaphorical links. But then, at the same time, perhaps there’s also something analogous in this all-white (at least in terms of performers, as far as I can tell) company attempting to critique these problems, and their having an actor play a dolphin. In common with Beanfield, the admission/recognition of failure doesn’t feel defeatist, so much as meta-data about the problem, and the ways in which these problems are presented/imagined. (Although, this is maybe a slippery slope, on which the logical step would be having an all-male company critique the problems of the patriarchy...) Perhaps the discomfort/uneasiness is a part of the strategy, cf. Brett Bailey’s Exhibit B?

Discomfort aside, though, the production and performances are all first rate (and one can’t wait to see it in a first-rate performance space, instead of in the sodding Pleasance with its myriad indignities for performer, performance and audience alike). Joe Boylan, Craig Hamilton, Ellice Stevens, Victoria Watson are all startlingly good “actors”. I mean, there really is acting in Tank. Sure, it’s “acting”, with the actors themselves putting the quote-marks round what they’re doing, but, if anything, that performance style of “being yourself switiching into character and out again, while commenting on the act of doing so” seems like it must be infinitely more difficult to pull off satisfactorily than just having a stab at “playing someone else”. Together with directors Billy Barrett and Ellice Stevens (again) – the text was created by the entire company – the company have created possibly one of the most intelligent, intellectually satisfying multi-authored/devised theatre shows I’ve seen in the UK.


Tomangoes - I Really Love You