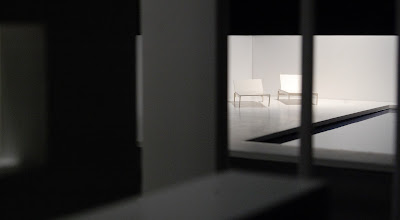 Ok. There are two* ways to tackle Bildraum. One is the all out rave with a bunch of pull-quotes, and non-sentences like “‘BEST THING I’VE SEEN IN EDINBURGH! A MUST-SEE! KILL TO GET A TICKET! A TRUE ORIGINAL!’ – Andrew Haydon”. But that’s horrible. Who wants that?

The other is the longer version that only fifty people will finish reading... [in this case, it's actually quite a short review.]

Bildraum (literally "picture/room") is extraordinary. It’s about 40 minutes long, and what it consists of is a series of still photos of small architectural models taken live on stage and projected onto a screen at the rear of the small stage. There is a bit of music – some of it made live (2011 called, it wants its loop pedals back) – some sound effects and some ominous ambient noise, but almost everything that happens on stage is architect Steve Salembier arranging the models, and photographer Charlotte Bouckaert taking the pictures.

Maybe the most obvious points of comparison are cinematic and artistic. I thought variously of Chris Marker’s La Jetée, the swimming pool paintings of David Hockney, L'Année dernière à Marienbad (and maybe more, Alain Robbe-Grillet’s La Jalousie), and a lot about Hitchcock.

While the piece is – necessarily – entirely postdramatic, it was fascinating to see the extent to which we (I) continually struggle to invent narratives; to write a story in our heads, based on all the information we have about the world; to make sense of the theoretically unconnected images appearing before us, by making them into a story; even while we could see the way that they were being made, and the fact that they *actually* revealed nothing more than a series of photos we watched being taken of the insides of little architectural models. At the same time, it made more explicit than I’ve ever seen before on stage (more even than Katie Mitchell’s camera shows), the willingness and urge to participate in meaning-making, and the “contract of signs” between audience and performers/makers** (roughly: that we promise to translate the signs, if they’re careful in arranging them).

Maybe it’s incorrect to interpret the sequences of scenes as one single narrative. This could as easily be a triptych. There seemed to be distinct sections, separated by full blackouts. Ultimately, though, there’s not nearly enough information for any audience member’s interpretation to be “incorrect”. At the same time, it’s not so open that you’re simply abandoned in a field of signifiers; you get a sense of place from these models. Architecture isn’t, after all, a static field with no developments. You get a vague sense of time and place from the models. And, when things happens to the models – small or large context changes that make you perceive them differently – that also doesn’t happen in a vacuum.

In a way, this is the coolest show I’ve seen on the Fringe. Cool in many senses: it has a muted, almost monochrome palette; its soundtrack is laconic; the performers do not exert themselves (there is precision, but not “effort”); the overall effect is modish. At the same time, there’s also a kind of nerdy delight to it all. There’s also a sense that – although original now – this is a form that could really be taken forward and adopted/adapted *a lot*. A kind of equivalent new puppet theatre for the postmodern age. A new vocabulary for storytelling (and not-telling). (In short: I want *everyone* to start making these. I want to see one at the NT. I want to see one of these as a revival production of an extant text, or an adaptation of a novel... I want to read Michael’s review telling us that it’s not theatre...)

But, yes, while that’s for the future; in this present, do definitely go and see Bildraum at Summerhall. If you’re anything like me, you’ll adore it, want to see it again as soon as it finishes, wish it had been twice as long, and be totally inspired by the potential of the form.


*Ok, there are more than two.

** It’s fascinating that despite the 'postdramatic-ness,' this piece feels much more allied to the theoretical writings of Patrice Pavis, rather than Hans-Thies Lehmann (if that’s a divide other people recognise). ((Although “the contract of signs” is Erica Fischer-Lichte, I think.))