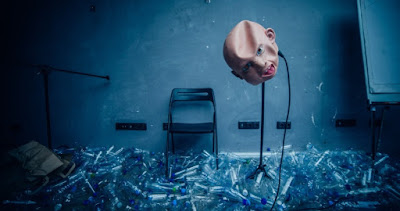 I went into Under Ice knowing nothing more than the title and “it is Lithuanian”. I’d discounted the possibility of it being German playwright/director Falk Richter’s 2004 play, Unter Eis, because if it was Falk Richter’s name would have been on the poster, right?

I came out *really* wanting to know how the piece had been made, so I went to the Summerhall website:


“...this contemporary adaptation of Falk Richter’s famous play, by the prominent Lithuanian director Arturas Areima, represents a new generation of theatre. Distilled from more than hundred hours of research [is that a lot? Whose research?] and imbued with a dark and gritty aesthetic, Under Ice is an alienating yet universal mirror of the things we run from, and the things we are...”

Quite by chance, I happened to see Arturas Areima’s graduation production of Road in Vilnius in 2008. It was clear, even in that stark, stripped-back, entirely humourless staging of Jim Cartwright’s play that Areima had *something*.  His new staging of Under Ice – the original is still in repertoire at the Schaubühne, at time of writing – is genuinely remarkable.

After watching the piece, I’d have been more or less prepared to swear that this was a new, original, devised/written piece made by the Lithuanian company in the last year – maybe operating something along the lines of the Estonian group NO99.

The aesthetic here feels most like that video of the interview with Laibach from Yugoslavian TV in 1982. There is literally nothing digital visibly on stage. Ok, the TVs are modern, but they could just as well be old ones. Similarly, the soundscape – and, blimey, it’s great – sounds like it’s been made using old analogue delay pedals and effects desks; short reverb feedback and echoes on microphones is the order of the day here. On the three large TV screens, a near-continuous video montage plays; most of it pre-21st century footage – indeed, footage of the twin towers attacks, Trump, Obama, Merkel and Putin feels oddly like broadcasts from the future.

The picture of contemporary corporate life feels familiar enough, however. The language of corporate recruitment, assessment and self-betterment mingles with the extremes of fascism and pretty much every extremist’s online output into one indistinguishable paranoid whole. At the same time, there’s a kind of poetic undercurrent running beneath the piece, allowing a fractured lyricism to offset the otherwise relentless brutality.

Similarly, visually, while the whole is soaked in a kind of 1980s insane machismo, a mess of cables and empty plastic bottles, flourescent lights, and power dressing, another man sits trapped – Samsa-like – in an executive chair, in a cage of microphones. The three performers [no programme, no names] deliver a brutal, at times almost too convincing performance of far-right, business fascist, masculinist supremacy.

I’m not sure how “relatable” the text is. I mean, it’s *really* extreme, and Richter’s musings (have they been supplemented? Re-written? I don’t know) – as elsewhere – don’t always quite hit the exact nail on the head for me every time (and, again, it does feel like a problem that it’s *another* all male play). But, at the same time, the strategies of this extreme 2004 text do now feel worryingly prescient. I mean, this really is *The Play* of the Trump Presidency and environmental collapse, and I’d venture to say that it’s this production from the former Soviet Union – much more than the polite, expensive-looking Schaubühne one – that is the ideal delivery system for the text. I mean, lest we forget, in amongst the visual overload video montage of Trump and Putin is Trump’s suggestion that NATO is to become a protection racket; while Putin’s designs on the EU’s Baltic states are hardly a secret... The cold war aesthetics here really aren’t *just* cutesy Ostalgie.

So, yeah. Christ. Brilliant production, and unexpectedly chilling; far more so than the seeming dozens of end-of-the-world pieces written by comfy Brits. The Lithuanian context makes what might have seemed like petulance from a West German feel like a genuine scream of rage and terror from the “liberated” East.