World Without Us – Summerhall, Edinburgh 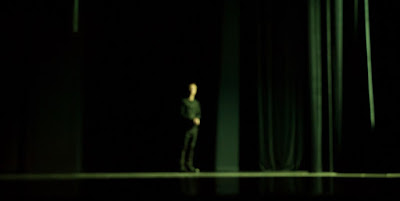 Ontorerend Goed are something of an Edinburgh Fringe institution now. Their first show – Smile Off Your Face – was first seen/experienced a decade ago in 2007 (how is it already ten years?). To a greater or lesser extent, their shtick has always seemed a bit to do with shock and/or irritation. Maybe that’s unfair, and increasingly it’s less true. As a company, they have also often, previously been about a demonstrable level of unscripted/unscriptable interaction and improvisation. (Admittedly, I haven’t seen *everything,* but...)

As such, World Without Us marks something of a departure from Ont.G’s usual – if always original/dissimilar – works. It is a monologue played on a near-bare stage – albeit with a biggish sculptural element in the middle. It has lighting changes that correspond to the text. It features a kind of direct audience address, albeit to a theatre that the speaker imagines is empty. It is, in short, theatre. It is also, until the final ten minutes, calm, even soothing. It imagines the end of the world, or rather, the complete, sudden disappearance of all human life from the planet. All other lifeforms, animal, insect, plant, etc. continue as they were, suddenly unmolested by humanity. At the start, as the disappearance of humans begins to be explored, by our narrator and by the animal/insect life inside the theatre, we imagine these beetles and rats gradually climbing out of their usual hiding places as they realise no one is coming back. The conditions of buildings is discussed. In the sky, a plane suddenly deprived of passengers and crew continues to fly straight forward around the earth until its fuel expires and it crashes into an ocean.

The concept of time becomes redundant. All man-made ideas become redundant. Money sits in bank vaults with no one to spend it, its value suddenly erased. National borders are suddenly erased. Property ceases to have meaning. Things people have needed lie untouched, nothing more than their constituent chemical composition and atoms.

I know John Lennon might have also asked us to think about this before now, and the piece also makes a fascinating counter-point to Kieran Hurley’s frenetic, more Amis-like apocalypse in Heads Up (review forthcoming), but for my money this is a beautiful piece of writing. It’s spare, evocative and lyrical. It has a kind of sci-fi Lovelockian grandeur to it. Rather than overly concerning itself with the human factor, it asks us to imagine far into the future – geologic ages away, almost – when forest fires consume the ground where once the theatre stood, and then imagine everything growing back, and evolved and extinct species. It puts things in such a long perspective that even worrying about something as trivial as, say, the result of the forthcoming American Presidential Election feels completely pointless. It’s a useful widescreening of perceptions for a point in recent history where everything was starting to feel just a little bit overwrought.

But then there’s the end of the show. So far, the whole has been beautifully, perfectly crafted. Gorgeously written, and delivered with a remarkable (for the UK) degree of calm and understatement*, but then [SPOILER-ISH] they go and play pretty much ten straight minutes of the stuff that’s on Voyager – in this narrative, now the last remnants of the whole of the human race. And it’s intensely irritating. It feels, at first glance, like they’ve just miscalculated the ending completely. And if they’re trying to be nice, or interesting, or rounding off the thing nicely, then they have. But I don’t think that’s their aim. I suspect that it’s meant to grate. I suspect we’re meant to wonder what the hell they’re thinking, putting this awful, 70s, American-curated kitsch about humanity at the end of this beautiful piece. And, for me, that was their powerful post-script. That this is an actual thing. All that will be left of us, once humanity disappears, is this terrible Western Imperialist, vaguely white-racist nonsense about American technological and global dominance. Jesus, it’s tragic. Our best hope is that, once humanity has vanished, there’s no other life-form in the universe that’s interested in reading President Jimmy Carter’s address to other sentient life-forms.

That the piece also makes one perhaps a bit wistful for the end of humanity is also probably not insignificant. If there’s a preponderance of apocalypses at this year’s Fringe, then it’s also notable that they’re not really saying it’s a bad idea.

*performed here by Valentijn Dhaenens, although I’m sorely tempted to see it again when Karolien De Bleser takes over halfway through the run – indeed, KdB’s involvement scotches one of my niggles that it was maybe a bit too Default White Male when it absolutely doesn’t need to be, even if it is strangely appealing (to me) to have beyond the end of the world narrated by “Heroes”-era Bowie’s Hamlet (as it were).