(The fall of) The Master Builder – West Yorkshire Playhouse, Leeds 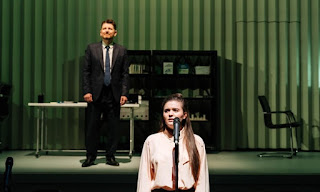 It strikes me that WYP’s new adaptation/production of Ibsen’s The Master Builder is a good example of where British Theatre™ has got to in 2017. A good place to take its temperature, so to speak. It’s worth saying at the outset that it’s good. Very watchable. (“Enjoyable” wasn’t ever going to be exactly the right word, but despite that it *is* enjoyable; in the sense of “dramatically satisfying,” at least.)

The first half cleaves pretty close to Ibsen’s original, played naturalistically in a realistic set, updated to present day Engway/Norland (insofar as everyone has Yorkshire accents, Norwegian names and place names, and HRH Prince Charles is down to open the new shopping centre (with a spire!), which Halvard Solness has designed). In the second half, there is some polite adaptation. Clunky chunks of expository scene are binned in favour of snappy, to-the-point monologues. The cast – still in character – talk into microphones in a downstage mini-orchestra pit, while Reece Dinsdale’s Solness alone stays in/on the office set stage, the rear wall of which gradually advances on him as the net of accusation/evidence tightens around him.

So, what do we get? I think it’s fair to say that we get a decent account of Ibsen’s (relatively rarely performed) classic play, The Master Builder. It is an account that both highlights and solves the problem of Ibsen’s 1892 original; that it is basically the tragedy of an heroic nonce. Which we maybe don’t find so heroic in 2017. We now have modern words for the sort of relationship that arose between Solness and Hilda Wangel, words like “inappropriate” and “grooming” (in much the same way that we can now bear to say “syphilis” as they never quite manage to in however many pages of Ghosts). Zinnie Harris goes a long way further toward removing any doubts we might have about what Solness’s behaviour really means. Here he is revealed as a serial offender. As such, it’s perhaps a bit of a shame that Harris hasn’t updated Wangel a bit more too, since she alone seems to have come straight from 1892, only stopping to change into some modern clothes, which don’t suit her any more than her six-year virginal wait until she can come and bother Solness some more, or her anachronistic unfamiliarity with the concept of child abuse.

It feels like a very British solution to a “problematic” text; re-writing it, so that it now acknowledges our modern need to condemn inappropriate behaviour unequivocally wherever it is found. There is precisely no ambiguity left in the play by the time Solness (do we really need to “spoiler warning” this?) chucks himself off his spire; now to escape justice at the hands of a baying mob below, bathetically shouting “kiddie fiddler” at him.

Similarly, the microphones‘n’modernity set feels like a very British compromise with the need for theatre to innovate and move forward formally. A modern set and microphones are in. no. way. actually innovative, or new, but they are excellent signifiers of the need for innovation; and, in a city theatre that has been largely without innovation for many, many years, they’ll do as a symbolic representation of actual experimentation, and doubtless strike many people watching as very daring, but, crucially, not off-putting. They are the ideal compromise solution for signalling radicalism without alienating the core audience. I’m not sure how much actual intellectual sense any of it makes, but that’s maybe an unfair bridge too far. And why not just chuck *some stuff* at a staging? The overall piece doesn’t suffer too badly for it. Because...

The main event here is the acting. Ultimately, this is not “writer’s theatre” or “director’s theatre,” this is very much actors’ theatre. Reece Dinsdale is properly, properly brilliant. (Ok, it took me maybe five minutes to adjust to the stage-shouting volume here, but once I was past that...) It’s almost impossible to pin down why it is you’re worried by him from the minute he steps on stage, but he’s just lethally threatening, without threatening anyone at all. If anything, at face-value he’s more needy than anything, it’s just the sense that Solness is the sort of person who might suddenly snap and get very nasty indeed, which rolls off the stage in waves. And he co-opts us, the audience, too; often furtively looking out through the fourth wall, to catch our eye, as if to share a look with us that makes us complicit in dismissing whatever’s been said to/about him on stage. It’s a very clever device indeed. It also works perfectly as the wholly credible character trait of an abuser with a public profile. Not only going about his abuse in plain view, but enlisting observers as both complicit and forgiving. The supporting cast is (almost) uniformly excellent (_ _ as Hilda is dreadful and not even remotely up to the standard of everyone else. Sorry).

So, what’s not to like? Very little. What *is* strange, and what this production highlights, perhaps, is the strange place we seem to have got to with Plot and Meaning in the early C21st. In Ibsen’s original, Solness ambiguously falls to his death, and it’s somehow mysterious, slightly supernatural, and both “tragic” and also a kind of final judgement-ex-machina on his conduct. Where I say above that the plot has been updated to placate modern norms and niceties, it’s the ending that now sticks out like a sore thumb. What do we actually want from endings these days? This one suddenly feels a bit too pat. Where the actual business of the play itself feels acute and perceptive, the ending now feels like a daft device. Perhaps it always did, but without any belief in anything more than postmodernity and capitalism (or whatever it is we do actually believe in now), neither accidental death nor suicide seem like a satisfying ending.

Perhaps the real answer is that we now demand another 12 hour-long episodes of painstaking trial and imprisonment drama on Netflix, stretching on into 2nd, 3rd, and etc. series in which we slowly get to know Solness or Hilda more and more (while allowing for discrepancies between individual episodes and writers), even unto what feels like an infinity...