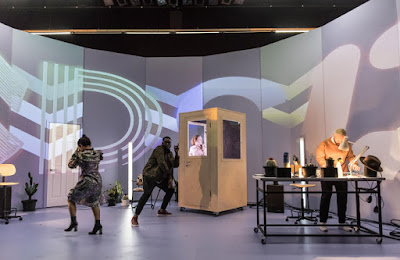 Sam Pritchard’s new production of creaky old Bernard Shaw’s creaky old Pygmalion sets a new high bar for revivals of “the classics” in England without appearing to even break a sweat. In terms of tone and style... imagine Clem Fandango was a character in a show directed by Thomas Ostermeier or David Marton.

That is to say, Pritchard and his designers have created a Pygmalion that is at once a performance-of-the-text and a critique of said text; it is both modern-dress and original dialogue, with the disparities between then and now allowed to stand and resonate as they will. It’s set in a kind of contemporary London that’s at once pinpoint-accurate and completely made up. But most of all, it effortlessly mines a very contemporary comic sensibility and makes this comedy by Shaw actually funny.

The first thing that happens after the pre-show state – the words: endlessly scrolling across the wooden back-of-the-fourth-wall lowered at the front of the stage – is a kind of cast lip-sync challenge. It sounds like all sorts of people (across age, class, ethnicity and region) read through the original first scene, while members of the cast mime along “in character”. It’s *such* a perfect way of setting out the production’s stall. It doesn’t even feel alienatingly arty, because a) it’s performed with such panache, and b) it’s funny. [You can sell the English any amount of art (or politics, for that matter) as long as it’s got jokes.]

The effect of hearing these myriad voices is manifold. We’re maybe already conscious that original Pygmalion is a comedy based on the premise that different classes talk different, and that in it a posh bloke teaches a “common” flower-girl to speak “proper(ly)”. (And if we’re not, the scene gets us up to speed in an intelligent way.) It also reminds us just how many voices there are in modern Britain. It (and the rest of the production) slyly undermine Shaw’s simplistic false posh/common binary. Rather than allowing Professor Higgins’s opinions to stand as some sort of bon mot-strewn thesis, he’s instead demonstrated to be something of an irrelevant oddball. This isn’t a production that thinks much of either his learning (portrayed more as hipster noodling) or his philanthropy (essentially the grotesque use of money to manipulate and abuse). Conversely, Eliza’s “common-ness” is never allowed to become the joke. I’m not exactly how Pritchard (and Natalie Gavin as Eliza) manage it, but somehow – perhaps through pointed silences and stares – we’re forcibly reminded of the level of poverty in Britain, and that how other people talk isn’t actually funny. (Although swearing in a posh voice at the wrong moment at an upper class party absolutely is.)

I’m afraid I don’t know the play nearly well enough to tell you the extent to which it’s been cut, and/or changed. What I can tell you is that the thing in front of us presented by Headlong is (at least in the first half) a near perfect mixture of reverence and “brutality”. Alex Lowde’s design places most of the action in a small blue cyclorama which also stands in as Higgins’s “real” sound studio. Sound is crucial here, and reputed sound design pioneers Ben and Max Ringham have gone right to town putting it together here – allowing the characters on stage the agency to fiddle with their own radio mics, changing the pitch and tone of their voices, adding reverb, echoes, all sorts. (By Higgins’s sound studio here, we’re perhaps reminded slightly of the Hungarian language lab setting for Marthaler’s Meine Faire Dame – a production that I worried would entirely eclipse this one, but that in the event I didn’t think of once). Similarly, Pritchard has been admirably unsentimental about all the action having to be live. There are some linking scenes, and they’re simply presented as viceos. Eliza getting a cab. Eliza sitting in her grotty bedsit. Eliza listening to My Fair Lady on her bed...

(YES! How often do you see a show that has the sense to acknowledge that in the modern world where it’s set, there’s already a musical of the story we’re watching? It’s like the question: “What is on ITV at [the times and days when Coronation Street is on] for the characters in Coronation Street?” It should absolutely be Coronation Street, right? Thank God generation postmodernism-is-normal have arrived to make that clear...)

Will Duke (projection designer) has done a largely outstanding job. It’s an interesting thing, because it draws us into the piece and allows it to show a sort of “reality” (a more heightened reality at least than that to which theatre can ever hope to aspire (Eliza running down the road past Green Park station, for e.g., makes use of *actual Green Park station and actress-playing-Eliza running past it*)). It’s also nice because it reminds us of telly and cinema, which are also artforms in C21st, and it maybe reminds everyone that those involve acting and stories and etc., so why be weird about theatre, hmm? What I’m clumsily trying to say is: for something that could be understood as “very arty” (and heavily, heavily Europe-infected), it does a pretty bloody good job of feeling as demotic, idiosyncratic and English as Corrie and Toast.

Yes, for me it could have gone further. The invention dries up a little in the second half in what feels like a bit of a mad rush to get the rest of the plot out of the way. And the second half is also where the plot gets a lot less appealing. Pritchard (and no dramaturg credited) does a fine job of de-centring the “emotional motor” of the piece. We see that – for all Shaw’s attempts to make Higgins’s snobbery and condescension charming and somehow egalitarian – in C21st eyes, the play hangs off insupportable premises. Even if Shaw was experimenting with some sort of “knowing” Victorian proto-hipster irony. And, correspondingly, when Eliza leaves the stage for the last time in this production we’re under doubt that she’s about as likely to be back as Nora Helmer. Correspondingly, I’m not sure what Pritchard’s done with the reams of romantic comedy makes particular sense. He’s stopped them being romantic or comic, which is excellent, but he has left them there. Perhaps to examine the expectations that surround the play. And, actually, to that end, it’s about as stern as the thing can get without just cutting/re-writing/swapping the lines. I mean, the more I think about it, the more I like it, but I can’t help wondering if there was an even better thing that could have been done here, given the radical inventions and irreverences of the first half.

Nonetheless, for all these little quibbles, this production announces Pritchard as a major talent, and one with a discerning eye for collaborators. I should also say that the entire cast is first-rate, demonstrating range, playfulness and ease-with-modernity that still feels sadly rare in modern British casts. Alex Beckett as Higgins in particular is outstanding: brilliantly funny, and unafraid to be unsympathetic, while at the same time being one of the most hugely likeable actors we’ve got.
This production should be the benchmark/default-normal for UK productions of the classics. There’s a lot further English theatre can go, but this is a strong starting point for 2017. 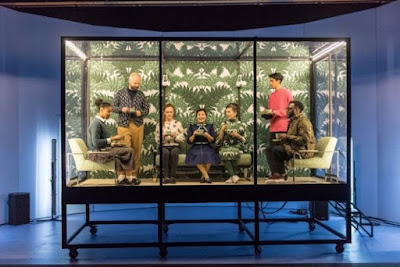