A View from the Bridge – Young Vic 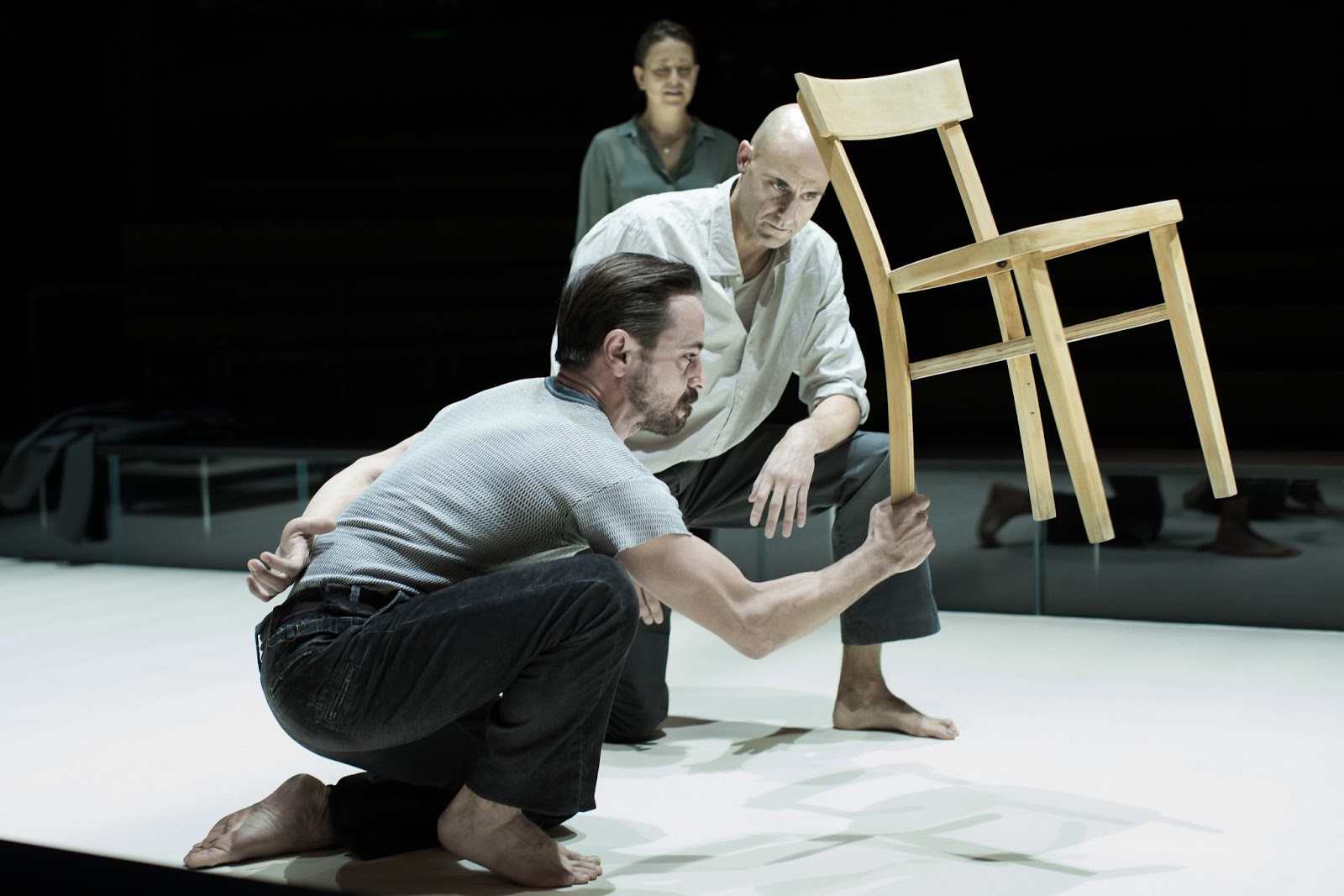 The posters for the Young Vic’s new production of A View From the Bridge still have Arthur Miller’s name twice the size of the director’s, but it’s Belgian director Ivo van Hove who’s the real draw here.

Indeed, the prospect of sitting through A View From the Bridge, which I studied for A-Level, and last saw performed at the National Student Drama Festival in 1999 (starring Hattie Morahan as Catherine), nearly put me off from stumping up £10 for a cheap seat on my otherwise free Tuesday night (couldn’t make Friday’s press night because I’m in Scarborough for NSDF). Two hours later I was being spat back onto the street, adrenaline coursing through my veins, feeling more in love with theatre than I have have done in Britain for a good few months.

Jesus Christ, this is good.

It’s one of those shows where your instant response is just to write a bunch of raving Tweets and a functionally useless review which expends its entire word-count exhorting everyone to murder for tickets. I’ll try to resist, but, bear that in mind once I start getting all nit-picky and a bit dry.

It opens with the audience confronted by a long slim thrust stage with high black walls stretching up into the flies. This wall – like a distended fire-guard – slowly rises during the prologue, to reveal two men – topless, muscular – showering under a meagre spit of water; washing themselves off after work. Eddie Carbone and a co-worker.

The first production of ...Bridge I saw had a late-middle-aged Bernard Hill in the title role. Just this vision of tough, hard-working labourers completely blew the cobwebs off the play. *Of course*, if the guy works day in, day out loading and unloading heavy bags of coffee or crates of whisky manually at the docks, *of course* he’s going to be built for manual labour. But this is a staging about tough, male, brute strength.

Mark Strong looks, frankly, fucking incredible. And he sounds incredible too – like he’s channeling the best of the 70s bits of de Niro and Pacino (*of course*, it’s about Italian Americans, of course he sounds like them – there are so many of these *of course* moments. In this respect it is an incredibly textually faithful production. It’s taken the script. Read it. And made a (near) complete physical and sonic sense out of it).

When he walks into his home his niece Catherine bounds up to him and leaps on him wrapping her legs around his waist her arms around his neck. And you’ve got another third of the play right there. The gesture is, of course, completely appropriate for the six-year-old neice she once was. But now looks incredibly sexual. Phoebe Fox seems genius casting, too. Slender and slight enough for you to be able to discern the girl Eddie tries to believe he’s still looking at, yet clearly woman enough to see what he’s trying to ignore. And then she opens her mouth, and she’s also got a tough, Italian-American Brooklyn accent. She’s not just a simpering, willowy thing. She’s tough and independent just as much as she is – with him – winsome and girlish.

The arrival of his wife’s (Nicola Walker) cousins, Marco and Rodolpho, drops a match in this petrol pool of growing incestuous desire. Eddie’s dislike of Rodolpho is as instant as his niece’s desire for him.

I remember a lot of A-Level ink was expended over prurient speculation on this point. Interestingly, nor do many of Eddie’s accusations ring especially true. There’s no way you could reasonably assert that this Rodolpho, played by the hunky, pec-heavy Luke Norris, could be “blown over if you shut a newspaper”. He looks like it’d take at least a small team of ponies to budge him. Nor is he remotely effeminate. The implication being that Eddie’s gay-smearing is entirely a ruse. Or that 100% naturalistic attention to the text has been abandoned in order to keep up the production’s aesthetic of relentless machismo. All of which just feels like so much nit-picking. It did briefly bother me when I was watching, but not much.

The climactic scene in which (do I need to spoiler-warning Miller’s plays? I think not) Eddie forcibly kisses first his niece and then, shockingly (for the time at which it was written) forces a kiss on Rudolpho is treated with such shock subsequently that for the first time – in this harder, infinitely more *male* environment – I wondered if that second kiss actually stands in for Eddie raping him – á la Blasted.

If the key note of van Hove’s production is its machismo and adrenalin, then the counterpoint lies in its use of music. Almost the whole thing is underscored with pieces from Fauré’s Requiem (sometimes whole, sometimes treated and looped). This has several effects. On one level it reminds us of the characters’ cultural, inherited Catholicism, but much more than this, it lends the entire production the air of a sacred rite, raising this small story of family strife in Brooklyn up to the status of some Wagnerian epic: indeed, when Marco beats Eddie in a show of strength – lifting a chair from the base of the leg with one hand – he raises it triumphantly aloft as the music swells and it looks more like something out of a modern dress Parsifal than anything Arthur Miller ever conceived. (I say this with admiration). Elsewhere, the soundscore is used to tick through tense family dinners. Echoing tick-tocks reverberate through the silence as the family members sit and chip away at each other. It might also be a misstep. Or maybe a bit too much. Or too odd. But for me it totally worked, both with the clinical setting – in the clean white tray, the cast might as well be lab-rats, being timed in some experiment – and as a way of keeping and marking the ever-present tension.

In terms of the text itself, I was horrified by the extent to which the play felt infinitely more resonant now than when I studied it in the mid-nineties. Obviously, the wider, more “universal” themes – love, incestuous desire, family tension, etc. – are always going to work dramatically; what now stands out is the fact that this is a story set against a backdrop of illegal immigration, police raids on migrant housing, and forcible repatriation. The sections of the story dealing with these issues, which enable Eddie’s ultimate betrayal of Marco and Rodolpho to the authorities, seemed to cause a different sort of palpable murmur round the theatre, as the audience recalled those posters and vans seen recently in England offering up a number for people to call and report illegal immigrants – precisely the method used by Eddie 60 years earlier.

But, for all this new-found contemporary resonance, ultimately it is the sheer energy, muscularity, and just plain, old-fashioned, great acting that makes this ...Bridge so compelling, coupled with the at times agonisingly beautiful music, and a final stage-picture which leaves you feeling entirely emotionally shredded and wrung out. This is an extraordinary piece of theatre.