[the best week ever in British theatre: part III] 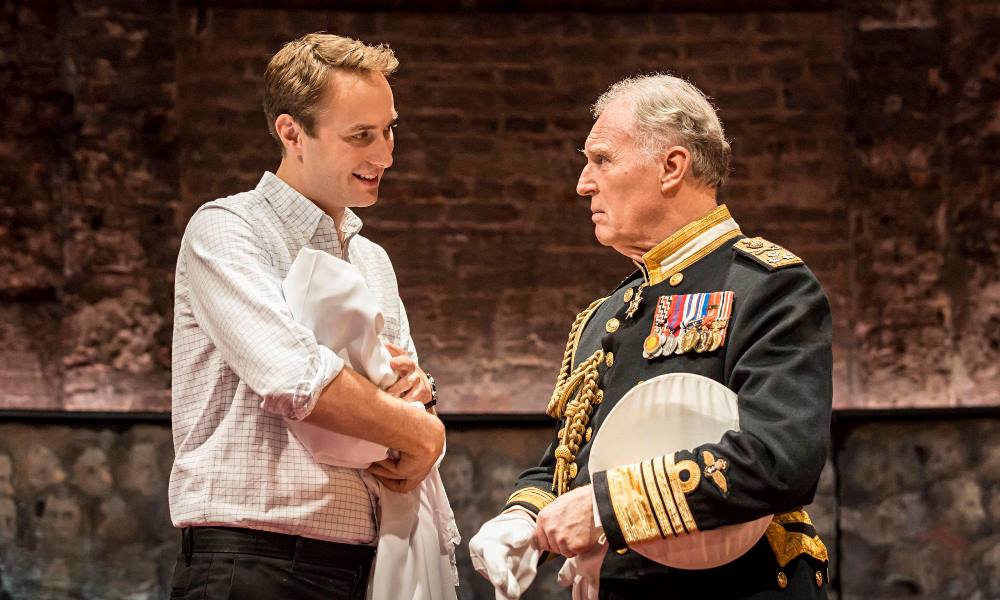 If the English want to tell you something really serious they’ll tell it as a joke. And Mike Bartlett’s new play, King Charles III, is very funny indeed. It is also like experiencing a lurching intellectual vertigo. Every time you think you’ve pretty much got the measure of it, it races off in a new direction. Formally, it’s like a genius mash-up of Shakespeare’s best bits, fashioned into an absorbing, compelling political thriller, heart-wrenching family drama, and bleak portrait of modern Britain, and all entirely newly-written with modern speech and idioms bent to iambic pentameter or blank verse. There are echoes of Hamlet, Macbeth, Julius Caesar, and Othello, threaded through Henry IV, Henry V, Richard II and King Lear. Christ, it’s fucking clever. And incredibly satisfying. And crucially, rather than seeming self-satisfied about its own cleverness, it all feels like this great big incredibly generous present just the for audience.

And then, stone me, there’s the production: it’s got a flawless ensemble; beautiful, clever, understated design; and original music so gorgeous in places that I worried that I might have a bit of a cry before anyone had even spoken.

What’s brilliant about the production, and its relationship to this, the play’s première, is that it is completely, perfectly, in tune with and responsive to the demands of the text to an almost meta-textual level. Director Rupert Goold is (perhaps unfairly) renowned for throwing *a lot of stuff* at productions. Here, the incredibly clever conceit is playing this new “Shakespearean play” as a modern-dress production of Shakespeare. The first scene especially – where as an audience we’re asked to take an awful lot on trust, to take in a lot of ideas, and to tune in to hearing modern language chopped into early-modern rhythms – functions almost like a totally sincere, pitch-perfect parody of just such a production. Perhaps it works all the better because we know Goold so well as a director of Shakespeare. Maybe those who saw it are even slightly reminded of the recent King Lear directed by the former Almeida artistic director Michael Attenborough (also designed by Tom Scutt, perhaps not entirely coincidentally). After all, this is – in part – a play about succession. About a successor’s need to prove his own brilliance and make his mark. (One idly notes in passing that all the posters for productions from the previous regime, which used to hang around the Almeida’s bar, are also gone.)

Really, though, pinning down what this new play is “about” is about as pointful as trying to say what Hamlet’s about. You could relate the plot. Or you could draw up a load of the different *themes* to which it speaks. It is about the monarchy, but it’s also about parliament, the conduct of the press, Britain’s unwritten constitution and various conceptions of "the British spirit". Alongside these it does brotherhood, love, treachery (of many different stripes), ambition, identity...

For my money, it also ultimately delivers an incredibly bleak, damning picture of Britain now, as broken, supine, and powerless. Sold off by successive Conservatives (the irony) until there is nothing whatsoever left to conserve. Midway through, there’s a brilliant scene where Prince Harry (Richard Goulding) slips his minders to go and get himself a late-night kebab (“a bit of Harry in the night” indeed), the kebab shop owner, however, as well as recalling those British soldiers in Henry V also serves like the gardeners at the heart of RII. The kebab-shop owner’s metaphor, obviously influenced by his own trade, imagines a Britain that has had strip after strip cut from it: “If you cut the Royal Mail, and then you cut the NHS and then you cut...” (i paraphrase)  And we imagine the nation as a rotating side of meat, ruthlessly being shaved until nothing remains.

That makes it sound like an evening of high, po-faced seriousness. And it isn’t. Early on, Bartlett even chucks in a perfectly observed Shakespearean comedy messenger in manner of Dogberry or Osrick – a preposterous royal under-butler, perfectly done by Matthew Robertson, in one of a series of perfectly judged cameo roles.

It says something about the play that you could give an incredibly full account of how it works and what it says just by detailing the minor scenes. But the fact is it’s also got a whacking great plot going on (alongside a touching sub-plot involving Prince Harry meeting and falling in love with an art student who doesn’t believe in the monarchy). Now, you could spend an entire review worrying about how *likely* the plot is, in the worst prose imaginable, but that would be kinda stupid, and would entirely miss the point. The plot is this: following the death of E II R, Charles III (Tim Pigott-Smith), before even being crowned, is required to sign into law a bill restricting the freedom of the press: fine in the hands of a nice, trustworthy Labour government, but potentially a charter for licenced corruption further down the line. He is reluctant. He is visited by the Tory leader (Nicholas Rowe), who not-too-subtly suggests that he could simply refuse to sign. This he does, setting the scene for a massive clash between monarch and parliament, with echoes the English civil war of the 1640s.

The politics here are played as principles and broad brush-strokes rather than detailed appraisals of press legislation. The real question is whether we (the audience, and by extension the British,) are happier with the idea of an unelected conscience acting in our best interests, or with our elected representatives’ feckless idiocies. Into all this strides Kate Middleton (Lydia Wilson), who hatches her own plan for Charles to abdicate and herself and William (Oliver Chris) to be jointly crowned in his stead. A plan the politicians can get behind because her basic rationale is that she and William won’t be any trouble.

It might not sound like much when laid out so starkly, but – and bear in mind all this is running alongside the Shakespeare references, and the jokes, and the brilliant, brilliant performances – it’s an almost perfectly weighted moral and political difficulty. There really is no right or wrong side. There’s no straw man here, no obviously flawed argument. Granted the word “referendum” never surfaces, but generally it’s a play that actually makes you think about what you really believe.

Writing this review (or at least this bit of this review) five days after press night, it’s slightly difficult to resist the idea that it couldn’t possibly have been as good as I remember it being. All I can do is report that press night had one of the best atmospheres I’ve ever experienced, with audience and critics alike all suffused with an enormous sense of happiness and, well, a sense of actual, physical pleasure at witnessing such an astonishingly ambitious and intelligent play far exceed expectations.

*Of course*, there are aspects at which one could bridle: being a play about The Establishment (and mostly a male establishment at that) it reproduces that class privilege in its casting, mostly providing parts for posh white men – although there are probably twice as many parts for women and half as many for men compared with the nearest Shakespearean parallel, which I guess is progress, if not equality. There is also the slightly strange feeling that somehow Bartlett has become the David Hare, Alan Bennett and Tom Stoppards it’s ok to like, all rolled into one. Which makes this play sound a tonne more conservative than it actually is. I mean, I guess it isn’t actually calling for the throats of the monarchy to be ripped out and a people’s republic to be established (a pity), but at the same time, it is so fiercely intelligent, witty and and questioning that I think it is hard to hold that against it.

So, yeah. Another play and production that it is impossible to do justice to from last week’s extraordinary sequence of plays. If it doesn’t get a West End transfer, I will eat my hat. And, once/now that word is out, I can imagine it having multiple casts and running for a long time to come, perhaps even unto television. In many ways it feels like the most remarkable new play for an incredibly long time (at least, if we leave aside the out-and-out art-house hits like Alles Weitere…, Wastwater, The Author, The Events, There Has Possibly Been An Incident and so on, which somehow feel like they inhabit a different category of brilliance). Best most alternative mainstream play, perhaps.
Posted by Andrew Haydon at 16:19