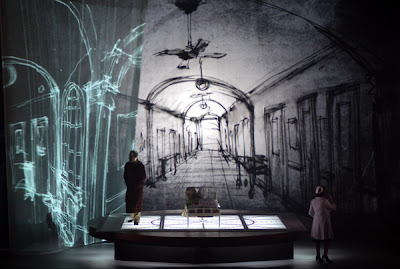 Arts types (and not just critics) are difficult buggers. On one hand, there’s the opinion that you want artists – composers, directors, writers, whoever – to observably develop from show to show. Artists who don’t are quickly accused of “treading water” or “re-hashing old ideas”. On the other hand, it doesn’t always go down so well when artists who are popular for A Thing do something that is only a watery shadow of The Thing They Do, or, worse, A Totally Different Thing. Can’t be nice to be an artist. Caught between the rock of perpetual reinvention and the hard place of still being the artist whose Thing everybody adores.

All of which is to say, The Perfect American is a long way from Philip Glass’s best work. However, I’m not convinced that my less-than-joyful reaction to the piece was anywhere approaching entirely his fault. Nor, I’m relieved to say, was it especially the fault of director Phelim McDermott, designer Dan Potra, video designer Leo Warner, animation designer Joseph Pierce (and, given that most of the video *was* animation, I’m not sure where that leaves Leo Warner, actually, but...), nor the conductor Gareth Jones, or any of the singers or musicians. No, the problem with The Perfect American is the atrocious libretto by the improbably named Rudy Wurlitzer.

The story of The Perfect American is a look at the life of Walt Disney from the vantage point of his final few months in the autumn of 1966. The clue to understanding the trajectory that this retrospective takes is in the title of the show. It’s irony, folks. Disney, who preferred to be called Walt, by everyone, turns out not to have been a perfect American at all. In one particularly clanging bit of exposition, he re-writes the Gettysberg address that he’s putting into the mouth of an animatronic Lincoln in Disneyland because he disapproves of Lincoln’s siding with “the negroes”.

I don’t know much about Walt Disney, but the few bits of his biography which have filtered through – that he was a massive racist, that he was anti-union and incredibly right-wing, that he wanted to be cryogenically frozen before he died and that he treated his employees appallingly – are pretty much all the facts that this inert script deals in. Actually, there’s also a lot of pop-psychologising of his childhood, or rather there is repetition with heavy quote marks of the myths he built up around his own childhood. Even that makes it sound like an idea that should bear fruit. This doesn’t. This fruit tree is well and truly withered.

“But,” I hear you say, “it’s a sodding opera, Haydon; most operas’ librettos are nonsense at best, aren’t they?” Perhaps I’ve been a bit spoiled by new operas this year, but last week’s The Importance of Being Earnest managed to animate and even improve on Oscar Wilde’s much-loved comedy. And, though I was a bit sniffy about the way Martin Crimp’s libretto for Written on Skin interacted with the music (I really must write that review up some time), there was no denying that some guiding intelligence was behind it. Wurlitzer (I promise that’s the name in the programme) trades solely in the kind of banal truisms that might be just about excusable as dialogue in a really snappily paced TV drama where you’re not really thinking about what anyone’s saying. Stretch a sentence like that over the better part of a minute – as this opera repeatedly does – and you’re forced into contemplation of some of the worst writing I’ve read this year.

Of course, the fact that it’s so stretched really doesn’t improve matters.

I used to really love Philip Glass. I mean, he’s the guy who wrote Koyaanisqatsi. He’s the guy who did the Low Symphony with Brian Eno and David Bowie. He’s the guy who wrote Einstein on the fucking Beach, for Christ’s sake. At his best, his music was full of attack and astringency, crisp, like lyrical mathematics. The same sort of romance as quantum physics. This, by comparison, is basically Glass soup. Ok, he’s got older. And he doesn’t have to keep re-writing Einstein... except here he sort of has, albeit, like it’s being played as some sort of dreadful Romantic period cross-breed. TV incidental music composers told to come up with something “a bit like Philip Glass, maybe?” could have written this. Better, probably. They wouldn’t have a massive reputation to back up whatever they ended up tossing off.

I mean, don’t get me wrong. It’s perfectly pleasant, and if there hadn’t been surtitles (and they could have maybe sung in German or Italian) I think the evening would have been fifty per cent less bad/disappointing/grating.

If Philip Glass suffers from the problem of having developed away from the stuff that used to make him good, then I don’t think it’s entirely unfair to say that Improbable are slightly suffering from not having really moved on.

No, it is unfair. Apart from anything else, video work like Warner and Pierce’s probably wasn’t even possible in theatre 14 years ago (when I first saw a show by Improbable). But what I kind of see as Improbable’s aesthetic – making visual theatre from relatively limited resources – doesn’t feel like a particularly good fit here. On one hand, you’ve got the large gaggle of performers who periodically move about the stage dressed as olde worlde Americans, or else as identically dressed Disney employees, throwing the sorts of shapes that, well, that the same gaggle do in Complicité shows. On the other hand, there are two gantries revolving from the ceiling, with video projectors beaming moving images onto massive gauzes dangling from the other end of each gantry. I admit, I’ve not seen that before, and it’s not half a bad effect. However, amid such a  of massive projections, the actors are absolutely dwarfed, and it’s sometimes hard to remember to look at them at all. But there’s still a weird disjuncture and the hi-tech makes the rest of the stagecraft look even more analogue. And, to be honest, without the video projections the stage pictures look slightly ordinary – like a scaled-up version of something you could plausibly find at BAC or the Oval House.

But why all this grousing? By coincidence, I’d even spent some of the afternoon prior to seeing ...American reiterating my not-really-liking Robert Wilson position. And yet, there I was in the Coliseum kind of wanting the aesthetic to be a bit more, well, clean and sci-fi with fewer of the ersatz eastern-Europeanisms of Britain’s late-90’s Alternative Theatre. But that’s a taste thing, right? I mean, it was a perfectly good one of those, right? Well, to an extent. I don’t think it was an outstanding example, and well, coupled with the music, I wanted it to be outstanding.

Ultimately though, aside from the car-crash libretto, this was a perfectly pleasant evening. I don’t really remember being bored. Even the plotting had enough hook-y moments to keep you interested, even if the dialogue sucked. And the music was perfectly pretty. The singing (particularly Christopher Purves as Walt) was actually some of the best I’ve heard. Purves has a singing voice that manages to hit all the notes, keep the words audible and never once sounded forced (to my inexpert ears, as far as I remember).

On the other hand, I did wonder about the entire purpose/trajectory of the piece. Coupling leaden satire to this kind of slightly kitschy musical take on Americana, while an obvious choice, didn’t seem to reap the rewards which should have been its by right. Perhaps the biggest obstacle here was always going to be context. I suppose to an American audience, this might still seem like a shocking bit of iconoclasm – a daring takedown of one of the country’s best loved sons, and with it, another part of the American Dream.

Here in Britain, to the best of my knowledge, we’ve had Uncle Walt pegged as a crypto-fascist for most, if not all of my lifetime. And, sure, I grew up watching the odd Disney movie in the holidays, but they were hardly the bedrock or defining myths of my childhood (those honours go to Michael Horden’s C.S. Lewis, the BBC’s Lord of the Rings, Alan Bennett’s Pooh (never Disney’s), and Martin Jarvis’s William). So I guess there’s just less at stake for us here. I readily concede that the idea/ideal of America is a moving one. The Bill of Rights, the Constitution, the Gettysberg address and so on: a country founded on anti-imperialism. But, hey, I think we’ve all caught up to the fact that countries don’t always deliver on their promises (I’m still disappointed that the Soviet Union didn’t pan out quite as hoped, FFS), so to use 1966 and Disney’s death as the tools to dissect America now itself feels like the same exercise in quaint nostalgia as Walt’s own harking back to his mythologised childhood/foundation myths. 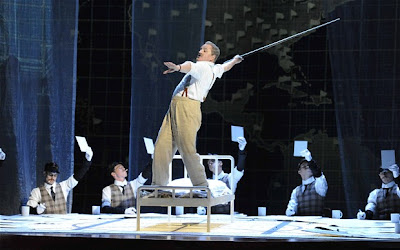 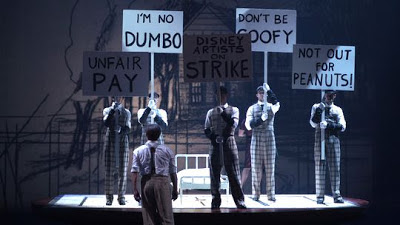