Dances of Death – The Gate 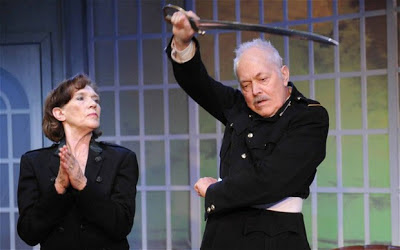 “You won’t like this,” suggested my friend cheerfully as we sat down for the press night of August Strindberg’s Dance(s) of Death. “But, but, but... I liked Kenneth Branagh’s Ivanov and After The Dance, FFS” I protested, as the lights went down.

But I do like a challenge. And, apart from being interested generally in what The Gate has to offer, I’d never seen Strindberg’s Dance of Death before. This new version by septuagenarian terrible Howard Brenton also has the (questionable, it turns out) advantage of included the second, rarely performed part of the piece. But my challenge was to like it. And, for the first forty-five/fifty minutes or so, I did like it well enough...

Dance of Death itself is a kind of misanthropic, Scandinavian old-people’s Private Lives, or an even bleaker version of Who’s Afraid of Virginia Woolf. A married couple approaching their thirtieth wedding anniversary bicker, fight and torture each other. Edgar (Michael Pennington) is a retired, middle-ranking army officer, his wife Alice (Linda Marlowe) is a thwarted actress. Apparently, they’re such a pair of old cunts that no one else on the island where they live even invites them to social events any more, and you can see why – they’re self-absorbed, showboating old drama queens. One stormy night Edgar’s old friend Kurt (the excellent Christopher Ravenscroft) turns up to visit. TBH, not a great deal happens. Edgar blusters at him and then almost has a heart attack. Kurt sits with him through the night. Alice flirts with Kurt. There’s a lot of territory marking and to-ing and fro-ing and eventually [SPOILER] it turns out Edgar and Alice are likely to remain together torturing each other, and anyone else who slips into their orbit, until they die.

In the Havershambles of a second part, the focus shifts partially to Edgar and Alice’s daughter Judith (Eleanor Wyld), and Kurt’s son Allan (Edward Franklin) where Judith is coming on all Estella with Allan’s Pip. Edgar continues his campaign to “destroy” Kurt mostly and Alice a bit too, this time using their children and Kurt’s money. I won’t tell you how it ends, but a few days later, I don’t really remember it even mattering much.

Tom Littler – who has spent three years with the Peter Hall company – offers a production that is almost a dictionary definition of safe and conservative. Nothing wrong with that, of course. In many ways, it is potentially exciting to see these big old actors up-close, prowling round the Gate’s tiny stage like so many caged big beasts. Annoyingly a few things conspire to puncture this proposition. Firstly, for my money the performances could mostly do with being turned down from 11. We’re not in the Theatre Royal Bath now. You can hear someone whisper on stage from the back of the Gate. Certainly no one needs to raise their voice. Beyond this, at certain crucial dramatic moments the production barely avoids tipping over into melodrama. Perhaps all this is the director’s intention, but for me it was all a bit shouty, and old-school.

Then there is the problem of characterisation. Generally I’m not a big fan of Michael Pennington. He has a pronounced line in capering, which I just can’t stick. So, I was pleasantly surprised here to find myself rather admiring his largely de-capered portrayal of Edgar. Until, as I say, abut the 45/50 minute mark, at which point, we’d been fed so much information about Edgar’s character that what the actor was doing didn’t seem even remotely to communicate the character he was apparently playing. Now, all this could be part of some very clever thinking on the part of actor and director. There is, after all, the fact that most of the things we’re told about Edgar are things we’re told by his wife, who is herself a ridiculous old drama queen, milking the alleged tragedy of her situation for all the sympathy, melodrama and leverage she can get out of it. On the other hand, Pennington just doesn’t really seem up to the job of being even credibly mistaken for a frightening tyrant. He Is much more befuddled, cuddly and grumpy, so when he does start properly making people’s lives a misery in the second part, it seems all the more surprising. I’m not really sure what I wanted instead (well, Ian McDiarmid, probably); I’m not saying I need my villains to be pantomime villainous, but at the same time, well, if someone is being actually nasty, don’t we need to get a sense of that? Here instead, it felt like everyone on stage was an unreliable narrator, to the extent that the story stopped mattering because there was no way of believing any of it.

There is also the matter of Jerwood Young Designer James Perkins’s set. On first glace, its curved walled study/living room is a fine, functional, anywhen room which offers a credible space for the actors to inhabit. There are perhaps nit-picky details of construction, but on the whole it is sound. It is in the second half, when the room transforms into a conservatory, the windows of which given out onto – well, onto a bunch of projections of different paintings and photographs scene-by-scene that we’re into stranger territory. Obviously I’m not about to blow something up for a sudden shaft of non-naturalism, but in the scheme of this production it is bloody strange, and rather artlessly done. Worse, though, is William Reynolds’s lighting design, which has to be one of the worst I’ve ever seen, with every light pressed into service, and still there is pooling, the projections are all but eradicated, several lights seem only to be lighting the beam in the Gate’s ceiling directly in front of them (distracting), or the heads and shoulders of the first two rows (again, distracting in this sort of fourth-wall production). And the less said about the sickly green light that comes on whenever Edgar is feeling a bit ill the better. On the up-side, Linda Marlowe stagey-ness actually fits the melodramatic Alice rather well, even if her cattiness is a bit too pat. And both Franklin and Wyld as the two youngsters are actually rather good. Christopher Ravenscroft, who I think is one of my favourite actors of his generation since I saw him in Taking Care of Baby, is also mostly great, although he does get regrettably co-opted into some of the melodramatics to the detriment of his performance.

Beyond this, there is also the problem of Strindberg’s utterly stupid views of humanity to deal with. Incredibly, Sue Prideaux who writes the introduction (and Brenton, I think), both comment approvingly on Strindberg’s feminism – Prideaux noting his 1884 book Getting Married as a 24-point manifesto for Women’s Rights. I find this notion preposterous. Strindberg is nothing if not an irredeemable misogynist of the first water and this play bears that out as much as anything. The only way Strindberg might hope to mitigate charges of woman-hating is to plead in his defence that it’s not just women. And he might be onto something with that. He takes such a dim view of humanity en masse that to suggest it’s just women he hates is perhaps a bit unfair. Oddly, there’s also *another* fairly in-depth bunch of chatter about the politics of Scandinavian water regulations (cf. Enemy of the People), which for perhaps Pavlovian reasons, didn’t endear the piece to me further. It did also make me wonder whether Scandinavian water regulations weren’t somehow the new sign of our own troubled political times, albeit in a way which is utterly impossible to fathom.

Overall, it could be that my friend was right; that I was destined never to like this, but, having given broad-mindedness my best shot, I think there’s also plenty for fans of naturalism at which to bridle. On the other hand, the production doesn’t really embarrass the Gate, and if you’ve not seen the play(s) before and are keen to do so, then this is a production that will at least keep you engaged and show you what happens with a minimum of fuss. Not exactly a high point of my theatrical year so far, but a respectable distance from its nadir.
Posted by Andrew Haydon at 14:40