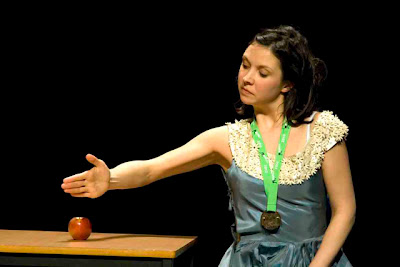 Mess is ferociously funny, staggeringly generous, compassionate and wise. This needs saying first, because it is also, nominally, “a show about anorexia nervosa”. From the piece's published playtext, you can further learn that it is specifically a show about writer and performer Caroline Horton's personal experience of the illness. And if that doesn't make it sound like, at best, an earnest hard-sell, it's difficult to imagine what would.

It's a piece that, in theory, I shouldn't like at all, but one that I turned out to love from the minute it started. It's a kind of clown show (and ordinarily I hate clowning); but then, Complicité's A Minute Too Late was essentially a clown show about the death of Simon McBurney's father. And that won a Perrier Award. This might be a good way of thinking about Mess.

The premise here is simple enough: Josephine (Horton) is putting on a play about anorexia nervosa. She is assisted by co-performer Boris (Hannah Boyde) and the musician Sistahl Bremeni Marthin (Seriol Davies). Actually, as Josephine is at pains to point out, they're only doing the show on the Fringe, so this isn't the “proper” show. The proper show would have a proper stage, an orchestra in a pit, set changes after every scene in black-out, and a revolve. As such we the audience are repeatedly required to use our imagination.

I was going to comment that if it's a meta-theatrical trick good enough for Henry V, then it's good for Horton, but actually, this is a cleverer joke, because she's never asking us to imagine something more real. She's just referring us to a more idealised version of the show.

It's a stroke of genius. Without once labouring the point, it manages to create a central metaphor for the anorexia itself, and creates a way of not making it just about Horton's experiences, by anchoring it a) very firmly to a made-up character, but then, b) also to the whole form of the show; the whole piece's insistence that its not right yet, that it's not quite reached how it should be, that it's not in control enough.

Another pitch-perfect touch is the way that the performers use apology and embarrassment. The on-stage cast pretend to be terribly awkward about their own subject matter, which totally lets us as an audience feel completely fine with it.

Elsewhere in meta-theatricality, there's also the set – essentially a giant white, thick pile bath mat cast over a sort of climbing-frame sized mound with a parasol at the top and some kitschy fairy lights. This mound “represents the anorexia”, we're told. As Josephine spends a significant amount time buried up to her waist in the tower, it also represents a neat visual reference to Samuel Beckett's Happy Days (FWIW, I saw Horton in an outstanding production of Beckett's Not I directed by this show's director, Alex Swift, eleven years ago, so I'd be willing to bet this resonance isn't just my invention/coincidence).

But none of this is explaining what makes the show so moving, although it does go some way to demonstrating precisely the level of outward looking, intelligent thinking that's gone into making this the diametric opposite of a solipsistic, one-woman show about the performer's anorexia.

The piece's strategy of both totally meaning the various poignant vignettes that play out scenes from the process of the illness (there is pointedly neither a proper beginning, nor a “real” end) and also violently puncturing them with humour means that it can use kitsch to achieve seriousness but milk earnestness for endless laughs.

You could admire the piece just for its cleverness, comic-timing and stagecraft, but for my money it was the very real emotional honesty and insight into the thought processes of a mental illness which really made the piece stand out. You don't need to have suffered from anorexia, or even known someone who has, to find it affecting. Tweak the odd detail here and there, and it's just as much about any kind of addiction. Really this is a play about how people deal with things. How people cope.

This makes me wish I could take my best friend from school to watch the play. But I actually don't even know if she's still alive. We lost contact.