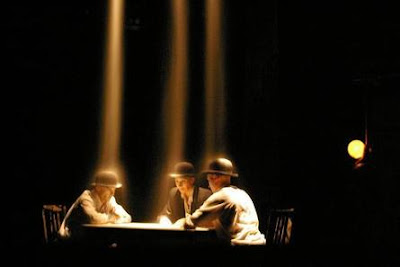 I first saw Do Theater in 2000, in their show with Potsdam company Fabrik, Hopeless Games at the venue then known as Komedia@Southside – now Zoo Southside. Watching their Hangman twelve years later felt like spending an hour wallowing in pure nostalgia.

Later that night (last Friday – bloody backlog), I ended up chatting to one of Rash Dash and she told me that she loved Hangman, when she'd seen it five years ago at Assembly's Aurora Nova venue. Or St Stephens as it now is. Where she is now performing a sell-out show of her own.

This show, more than any other I've seen so far this year, really made me think about how the imperceptible shifts in emphasis and artistry, expectation and understanding that take place from Fringe to Fringe.

[It's interesting to note in passing that Lyn here describes Hangman as: “yet another piece in this year's Fringe about the power of words and the dangerous games we play as we try to twist their meaning.” Shades, perhaps, of her disconcertingly off-beam assessment of Mess as “a show at the Traverse, Mess, that succeeds in making anorexia all pink and fluffy” thanks to overexposure to too many actually cutesy shows first. Watching Hangman in 2012, it didn't seem to be about words, twisted or otherwise at all; usefully pointing up the extent to which other shows you see have a way of impacting on how you're watching the thing in front of you – see my own growing thesis on “Autistic Realism”.]

And, of course, how anyone watches these pieces also depends heavily on where they're coming from. When I first saw Do Theatre in 2000, I think I'd already seen *some* similar work – Imitating The Dog's Ark (BAC, 1999) sticks in my mind as my Ur-experience of the battered-suitcases-and-dance genre. Everyone's will be different. If you haven't had yours yet, this is no bad place to start.

But it strikes me as unlikely that anyone with an interest in theatre over the age of 18 can have possibly avoided the genre, or its successors. In 2000, it struck me as something quite new and unexpected, but there were plenty on hand to tell me that it'd been kicking around Eastern Europe more-or-less since the invention of the suitcase, and certainly in Edinburgh since the late seventies/early eighties.


Hey, Haydon, this is all well and good, but it's not really a review of Hangman, is it? You haven't said a single thing that actually happens in it yet, have you?

Well, no. Although, strangely, the above is a fairly accurate picture of the thoughts that were whizzing about in my head while I was watching the piece.

There are a couple of reasons for this: firstly, I find it's what tends to happen during dance/word-free work. Especially when it's non- or very-oblique- narrative. The work opens up a directional space in the mind, and you find yourself just thinking along certain lines or free-associating within specifically set up parameters. Secondly the show itself is pretty nostalgic. I've already noted that it was already seen here in 2007 (although, this year especially, I'm starting to feel the extent to which the Festival has a very short-term memory), but it's more than that.

You enter the space and four bowler-hatted performers are sat around a table on a newspaper covered stage playing a frenetic game of cards. A fifth bowler-hatted cast member sits at the on-stage sound desk.

And you think to yourself, who are these people meant to be? Who are they in today's Russia? What are they to today's Russia and what is today's Russia to them? Were they ever *a thing*? Were they people? Are they standing for a disappeared class of Tsarist clerks, or Jewish merchants, lampooned at the turn of the last century? Are they subversive stand-ins for the vast bureaucracy of Stalin's USSR? Or are they simply archetypes of “clowns”.

[On taxonomy: I found myself slipping into late-90s/early-00s-speak to describe this piece and the two after it (Mr Carmen and Mephisto Waltz) as “Russian Clown Shows”. In fact, this is much more like “physical theatre” or “dance theatre” or “visual theatre”; and while barely "clownish" at all, still the most so of the three.  It still feels like no one has really come up with a satisfactory name for this sort of work. But perhaps we should instead stick to just calling it theatre, thereby widening the scope of that word?]

But even a clown archetype has to come from somewhere, mean something, have an historical moment. These really don't seem to have. Or rather, they seem like relics of the past. This is an exercise in excavation as much as it is a live event.

The routines are fun. Don't get me wrong. If you've never seen anything like it before – which I doubt, dear reader – then it's probably worth taking a look. This is a style of which everyone with an interest in theatre should be aware. Annoyingly, it's not the best example of that style. And as for meaning, in a way it doesn't feel like the piece is asking to be read like that. (Any more? Or perhaps it never was.) I don't say it's not pregnant with suggestive possibilities, but it doesn't feel like it's really asking to communicate anything more than the fact of its own extreme competence.
Posted by Andrew Haydon at 10:43