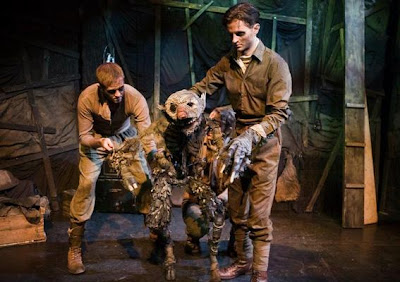 I managed to miss the previous couple of Ed.Fringe shows by Les Enfants Terribles, partly through inertia, and partly through a vague sense of antipathy to whatever it was I thought their shtick would probably be. (What I thought their shtick would be was: slightly-half-arsed, 3rd generation, British Eastern-European-clown-copying, white-face-wearing, battered-leather-suitcase-carrying, accordion-playing “physical theatre”). I happened to catch this one because a friend had a spare half of a two-for-one ticket and I'd only just arrived and hadn't got a plan and got bounced into it.

So, there's a fair amount of not-ever-necessarily-going-to-be-my-bag disclaimeryness right there.

In fairness, and as a positive, at least in The Trench, the Enfants have taken the above-described aesthetic and adapted it well to fit their purposes.

Set in a WWI trench, tedious white-face becomes ash-marked, camouflage-painted, hollow-eyed make-up, musical instruments, such as there are, are disguised in ammunition boxes, and in one neat sequence the cocking of a gun and scrubbing of a floor become the percussive accompaniment to – well, to a bloke standing in the corner playing the guitar and singing sub-Coldplay songs commenting on the action into a microphone. Which would constitute something of a break with the hitherto carefully constructed aesthetic.

Another positive is the willingness with which the company have embraced text, within their adoption of European mime'n'puppetry aesthetic. A postive that is immediately countered by the fact that the text that they have embraced is a pretty deadly cod-Shakespearean one. And one that they're not all that accomplished at delivering – imagine the Player King's description of the sack of Troy from Hamlet delivered as an eye-witness account of the sack of JB Sports from the news and you'll be within the ballpark.

All this would be forgiveable, or at least ignorable, were it not for the fact of the size of the audience (large) or the comments on the way out (“Ooh, that was beautiful”). So it feels like a) I'm not going to do too much harm by raising my own objections, b) that there is room for an alternative point of view, and c) that Postcards...readers might be at least grateful for/interested in an alternative perspective.

Less forgiveable or ignorable is also the strange trajectory of the piece. For the first half an hour or so, it's just about some men in the trenches. Set-pieces of mimed, sung-through or too-carefully physically theatred trench-life abound. It is dramatically inert. Then a thing happens.

A papier mache goblin turns up. A Birdsong-style tunnel has collapsed on Bert, and he's been handed a letter telling him that his wife has died in labour. Suddenly, there's more-or-less a story about a guy's magical quest to find the will to live, or something.

Things perk up for about ten minutes.

It shortly becomes clear that the magical quest will consist of some wandering back through a series of thinly veiled mythic versions of WWI horrors – a field of corpses, a mustard gas attack, and finally saving a fallen comrade at the cost of his own life.

Depending on your tolerance for such things, and for incessant sincere songs about such things, you might actually quite like this bit. 'fraid I didn't. It set my teeth on edge, and contained far too many internal contradictions about what it was trying to say about WAR; the worst of which was, despite a worryingly de-humanised insistence on pointlessness of the whole enterprise, this was ultimately some sort of celebration of individual self-sacrifice and a tear-jerky afterlife reward.

Which would be fine if we were all Vikings. But, really? A hymn to Valhalla and Martyrdom for 2012 with music by cod-Coldplay? No thanks.
Posted by Andrew Haydon at 10:02