Gods Are Fallen and All Safety Gone – Almeida 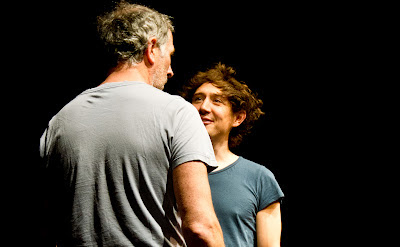 Selma Dimitrijevic's production of her play Gods Are Fallen and All Safety Gone is one of the most perfect pieces of theatre I have ever seen.

It's about 45-50 minutes long; the writing is spare, funny, and acute; and the form that she hit on for this production (the play itself has already been produced by other directors in Moscow, Glasgow and her native Croatia) is playful and inventive, allowing multiple fresh perspectives on the text even as we watch. It is also beautifully, cleverly, carefully, intelligently performed by Scott Turnbull and Sean Campion.

It's such a good production, that I actually feel a bit reluctant to really tell you too much about it. But that's a bit like saying “writing about theatre spoils it”, which would be a dumb thing for someone in my position to suggest. I'm also torn between wanting to tell you everything, and not wanting to spoiler it to death.

As it happens, though – and this should possibly come under the heading of “Full Disclosure” – I spent a day watching an early rehearsal of Gods Are Fallen..., so my experience of watching the actual show was already a slightly unusual one. (And one that also makes me think, “spoiler” isn't a term that can be applied here – there's just knowing different things before you go in which will make you watch in different ways)

Re: watching a rehearsal – actually, without ever feeling Stockholm-Syndrome-y, I think it actually increased my appreciation of the play, but not in a way that makes me think that I wouldn't have similarly adored it if I'd only seen just the final production, going in with no information at all.

There's something very interesting about watching a rehearsal process. After all, I was essentially watching a piece of theatre for pretty much seven hours. Perhaps a slightly meta- piece of theatre, since I was also watching the director interacting with the two performers in between [is there a proper word for run-throughs-of-sections?]. And yet, at no point did it feel like I was sitting through something *long*. Technically, this was watching more theatre than Gatz or Lipsync, but somehow, possibly due to a combination of being in a large, bright airy room, and the theoretical freedom to come and go as I pleased (or at least pop out for a cigarette occasionally), it almost felt shorter than sitting in the dark at the Almeida watching the “finished” piece. “Finished” gets scare marks, because there is still something beautifully *open* about this “end result” - like it's not possible to actually “finish” it. Just that putting it on in front of people marks another stage in its existence.

I should try to describe the form and content of the thing. If I were to be reductive, I think it'd be possible to describe Gods... (the title is from a quote, and I can't help thinking that, out of context, it would work better as “All Gods Are Fallen and Safety Gone”, which is what I keep calling it by mistake, but that's just me) as a variation on a well-enough known textual strategy; namely, the one where a scene is repeated, but with subtle, or not so subtle changes made in every repetition (other examples of the genre include Caryl Churchill's Heart's Desire, and a sketch by David Ives involving a first date and a hotel reception bell – I'm sure there's one by Ayckbourn too – and probably countless other examples).

Here the scene is a simple one of a (30-something?) daughter going to see her ageing mother. The subjects are simple: having a bath, a cup of tea, travel, the weather, boyfriends and relations, another cup of tea. The mother and daughter are being played by Scott and Sean. A young Geordie and an older Irishman (the latter last seen, by me, in Chris Haydon's production of Wittenberg at The Gate). In the first scene, the acting is also more-or-less entirely non-naturalistic. I would say they are just saying the words, except that's not quite accurate. It's not toneless or colourless. The emphases are all in the right places, but what's also being done is that the actors are pacing about at quite a frenetic pace on the (almost) bare stage, and firing off their lines almost as if they don't have time to think about them, perhaps a bit like a speed-run/line-run.

(In the rehearsal I saw, the company took this process/game even further, also rushing round a kind of rough, oversized kitchen dresser, having to touch certain points on it at the same time as speaking and genuinely having no time to “act”. It was interesting to see how this game had been incorporated into the presented performance, and the extent to which the actors had managed to keep the game *fresh*, even after further rehearsals.)

At the rear of the stage, seated at a table (and, well, they were playing Scrabble, I thought they were doing a jigsaw puzzle) were a *real* mother and daughter. Now, I happened to know that they were a real mother and daughter, because Selma had explained the concept to me at the rehearsal, but it was clear from the Q&A session afterwards, that audience members who hadn't known or been told had made that assumption.

It is an inspired additional touch.

On one level, it kind of returned the dimension of “naturalism” removed by having the mother and daughter of the text being played by men. On possible way of reading the staging felt like the men were enacting a possible future scenario that could plausibly be experienced by the mother and daughter. There was also the fact that, being actually related, the two women plainly did share both physical similarities and occasional behavioural tics/gestures (in this case, the way they flicked their hair out of their faces). These are the sorts of things that (un-related) actors could spend months trying to perfect for a naturalistic performance, and never quite capture. Here, the staging could be read as a kind of job-share, where the men did the speaking and meaning, and the women did the physical manifestation. The quality and carefulness of their self-conscious, and unselfconscious spectatorship was also brilliant to see. You could see where the script stopped them in their tracks, the points when one or other (or both) of them would look up from their game and just watch; all the while, plainly not wishing to draw any undue attention to themselves, but aware that they were legitimate subjects for spectatorship on a stage with only themselves, their table and chairs, and the two actors.

Not wishing to give away how the piece develops over the course of its four short acts, I shall only say that in addition to the clever intricacy of the staging, the piece also gently delivers a massive wallop of an emotional punch. And it's one that, also modifies yet further all the potential readings you could have had of the piece hitherto. Ideas of where it takes place, why the scenes are repeated with variations; all of that makes a renewed sense by the end.

So, to conclude (for now – I expect I shall end up writing about the piece again), I'll just restate my starting postion: A simple, complicated idea perfectly executed. Intelligent, emotionally intelligent, and somehow seeming to conjure a huge picture of the world from almost nothing; Gods Are Fallen and All Safety Gone is one of the most perfect pieces of theatre I have ever seen. 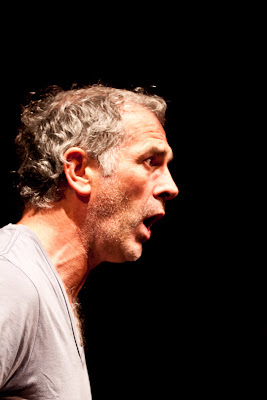 "One of the most perfect pieces of theatre I have ever seen." so true.. Thrilled that I had a chance to witness this masterpiece in Tbilisi, Georgia today. And happy that I still had a chance to share the impressions and emotions with my mom when I got back home.