You May! - The Place 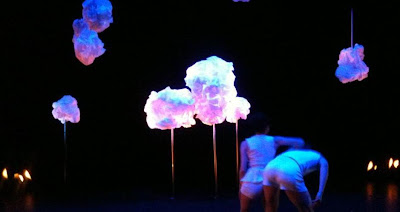 Once in a while you see something that you really don't have all that much to say about.

[indeed, I wrote this review on Tuesday night after having watched the show and would have left it un-filed if I hadn't happened to read Luke Jennings's piece about it in today's Observer. Having reviewed dance for, well, probably forever, doubtless Jennings actually *knows* a good deal more about it than me. On the other hand, reading his review, I didn't actually get the slightest sense of what the show might have been like – only a review of Dimitriou's programme notes. Which is just about the cheapest way of reviewing any show in any medium. So, here, if only for posterity's sake, is my take on the thing...]

Zoi Dimitriou's You May! is apparently inspired by Chris Marker's film of black and white stills, La Jetée (also one of the kick-off points for Melanie Wilson's Iris Brunette). However, it owes a much more transparent debt to Ivana Müller's While We Were Holding It Together, at points employing the exact same formulation of starting all the sentences with the same words, simply replacing “I imagine...” with “You may...”. However, where Müller's piece trusts to the power of speech and near-miraculous restraint, Dimitriou's piece flings itself about in what feels like a frantic search for *more stuff*...

The main problem – if this is a “problem” – with You May! is how episodic it is. However, I'm not sure what stage of development the work has reached, it is only showing for one night as part of the “Spring Loaded” season at The Place, and might well be a work-in-progress.

The show is essentially a piece of choreography, or rather, in its current form, a compilation tape of choreographies. It is difficult to imagine it altering much from this present form, however, because so much of the work seems triggered by its soundtrack (original composition by Andy Pink), which consists of very specific song-length pieces.

The soundtrack itself adds to this feeling of bittiness, lacking any real sense of a coherent style, instead feeling like a musician/sound-artist trying out a whole load of different ideas and seeing what sticks. To be fair, piece-by-piece, a lot of it *sticks*. It's pretty good stuff. Maybe a bit under-produced, but that has its charm, and, oddly, a lot of it also reminded me of off-cuts from the run-in or run-out tracks of my (very old, much-neglected) record collection: here, the fuzzy noise before I Don't Want To Get Over You; there, the stark electronic drum introduction to Head Like a Hole; I was even reminded of a few bits of Bauhaus. Not the songs, you understand, just little moments, looped and interfered-with by white noise and slightly distorted recorded speech. You know the kind of thing, right?

Ingrid Hu's sculptural stage is very pretty to look at as you sit waiting for the thing to start – about ten poles standing or hung from the ceiling, each ended with a scrunched-up paper ball of varying sizes, looking like giant, uncomfortable Q-tips or chic standard lamps [see photo, top]. However, to remain properly pretty, they apparently needed to remain under rather low lighting and Chahine Yavroyan's lighting design is probably the show's weakest link; blacking out, over-lighting, offering badly focussed light corridors, or blandly pretty blue washes with peach highlights. It looks nice, but in need of a lot more time or training and definitely added to the “episodic” problem.

However, this was meant to be a piece of dance, right? And so far I haven't said anything about the choreography.

Well, first off, in common with the music and lighting states, there was an awful lot of it. And it was similarly various. The first “track” involved the two dancers Zoi Dimitriou and (well, the programme said “Andrew Graham”, but this was the most French-sounding Andrew Graham imaginable) gradually bending spasmodically at the waist, while Zoi counted up from one to nine and “Andrew” did the tens. After they got to sixty, numbers were missed, and “Andrew” counted down from five to one. Later there is text about a man standing on a roof waiting to jump and a crowd gathering below to watch.

I want to avoid using the word “derivative” of the choreography, but, well-executed though it was, I've seen a lot of things a lot like it before. I know Pina Bausch casts a long shadow, but, well, this isn't unlike her oeuvre (yes, most of it). Ditto Alain Platel. The territory we're in here was not unlike a slowed down, more sensual version of early Frantic Assembly; much of the material looking like it had come from contact improvisation. One dancer low to the floor, perhaps crouched on, or arched off the floor, and the other rolling across their back, or being passed over. There is also solo work, this also tends toward the fluid and balletic, but there is also jerky, more twitchy stuff. What there isn't any of, is the pyrotechnical or violent end of things, nor is there any of the ultra minimalist, barely-dancing-at-all school of contemporary dance.

To sum up, Zoi Dimitriou is clearly a talented dancer and an able choreographer. In its present form, the dramaturgy of the piece didn't speak much to me, but that could well be as much due to my taste as to any deficiency in the piece.