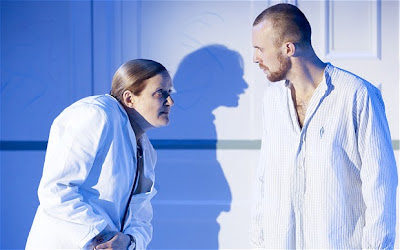 Having recently offered a lengthy defence of reading programmes and pre-publicity material before seeing shows, I found myself walking into The Physicists almost completely without a single clue as to what I was going to be watching.

More alarmingly, by the interval I still couldn't really have told you.

Here's what I did know: I knew it was by Fredrich Dürrenmatt (whose dates, and nationality I'd temporarily mislaid), and I'd known for a while that it was a new version by Jack Thorne, who I know a bit, and who'd sent me a message on FB saying how much he loved the play. Without looking at the programme, I couldn't have been sure who had directed it (I guessed, rightly that it was probably Josie Rourke). But that was pretty much it, in terms of knowing what to expect. Indeed, this review got commissioned about an hour before the show went up, before which point, I hadn't even been going to go to the theatre.

As a result, I found myself watching the play more intently than normal for clues as to what sort of a play I was even watching, what it was about, and how it was meant to work.

The play opens on a tableau of a murder scene. A red-faced Detective Inspector (Jon Ramm) and a couple of scene-of-crime officers staring down at the prostrate body of a young female nurse who has been strangled. They are accompanied by a sinister, plus-sized matronly nurse (Joanna Brookes) and later, met by the director of what is apparently a mental institution, Dr Mathilde von Zahnd (Sophie Thompson).

So far, so straight-forward.

Designer Robert Jones has set the action in front of a tall white wall covered in doors (not at all unlike Piet Hein Eek's recent interior design - though Jones's is cleaner, more stark, more artificial), there's a white, leather, designer armchair and an artfully arranged table with a couple of lamps. In the far right corner of the stage, a large oil portrait leans ominously against the wall. It's a pretty set, and one that tells us absolutely nothing. Well, very little. We're in Classic Play Land, clearly. New Writing never has sets like this. Reading the semiotics of contemporary British scenography, we now know that we're looking at a play for which location-specificity can take a back-seat in order for a more general sense or hint of “a place” or “an idea” to be foregrounded.

Costume-wise, We're definitely in the 20th century. The characters seem to be wearing outfits dating from after WWII, but of a rather “timeless” variety, which could intend anything from the mid-fifties to almost the present day.

If the visual aspects of the production refuse to give too much away, it is the acting which cements the faint sense of opacity. Put simply, firstly the performers do seem slightly to be in different plays. John Ramm's detective inspector has more than a hint of the Trustcotts about him – an almost archetypal red-faced, hat-clenching frustrated police fury. A comic Lestrade, if you like. Similarly, Brookes's mental health nurse offers more than a hint of the Hattie Jacques. Added to this side of the equation is Sophie Thompson's turn as Dr von Zahnd, coming on most like something Peter Sellars might have done if he'd ever been playing an elderly, mad, hunchbacked, female German (or Swiss, I suppose) director of a mental institution / crazed-industrialist.

On the other side, against this are the portrayals of the three titular physicists. The initial shtick of play is that behind three doors in this asylum are three mad men who variously believe themselves to be Einstein (Paul Bhattachargee), Newton (Justin Salinger) and Möbius (John Heffernan). In this instance it is Einstein who has murdered the prone nurse (Miranda Raison off of Spooks – who does do more than being a corpse later), but we learn than Newton has already committed a similar offence only a few months earlier. What perhaps wrong-foots us most here is that while the mad men are plainly meant to be mad – and (in the case of Einstein and Newton) are dressed in period-perfect detailed costumes – they are also played far more “straight”.

As such, we seem to be put in an odd position of watching both an oddly “heightened” absurdist melodrama, and something that occasionally seems to want us to take it and the situation of its characters a bit more seriously. For my money, I'm not entirely sure the production succeeds in making us see things its way. I'll put my hands up to not being the biggest fan of absurdism, especially when played as heightened melodrama or grotesque, but here the real problem feels like the uneven swings of mood much more than the character of any of those given moods.

The second half of the play does at least finally (and after well over an hour, it was apparently too long a wait for some people who left at the interval) tell us where it's coming from. And it's an interesting place. Basically, [SPOILER ALERT] we discover that none of the three mad men are in fact mad, but are in fact all expert physicists in their own right, with “Newton” and “Einstein” turning out to be agents from rival factions (the play was written in 1961, so we can perhaps guess to which powers Dürrenmatt alludes), they are both interested in breaking master-physicist Möbius out so that he can go and work for their side. Möbius, however, has thought about what happens when superpowers get their hands on break-throughs in physics – a final, quite moving passage sees the three characters speaking to the audience explaining the catastrophes that their knowledge has made possible. [END SPOILER ALERT]

In a funny way, the second part is almost as blunt as the first part is elusive. We totally get the symbolism. It is not for nothing that Wikipedia currently dubs The Physicists Dürrenmatt's “most easily understood work”. It pretty much stands up and shouts what it thinks directly in our faces. What feels odd, though, either about the play, or at least about this staging of it, is how remote that warning now seems to feel. We're not (God willing) two years away from a nuclear stand-off as the world was in 1961 – at least, not one that features the Mutually Assured Destruction that we all grew up with in Europe until 1989. And yet, as I've described, the production looks – reads – very much like it is doing that thing of 'reviving a play without much of an overt “take” on it, so that its contemporary resonances can speak for themselves' (by which I mean, no one is dressed as Tony Blair, and it's not been relocated to Iran). On that level, for whatever reason, I didn't feel the production making the connections for me, and sadly, they didn't seem to suggest themselves to me without such prompting.

I don't mind that the play doesn't seem to have “urgent, contemporary relevance” – I'm actually quite happy to watch a bit of historic humanism, but then, with neither “a number” being done on the production, nor the direction taking so much of a back seat that one feels one is really “seeing the play as written” (not possible, I know), but there were just enough choices that I found very, very definite and possibly against-the-grain-of-the-writing here, that it feels like this production falls slightly between two stools.

This is a shame, since I got the sense that Jack's actual new version of the script (and this is an interesting area – “version” versus the “translation” that I'd like to look into further), is actually a really very fine bit of writing – with a lot more room for understatement and comedy than this production gives it credit for.

So, over-all this felt like quite an assured, or at least “high-quality” bit of work, the performances were pretty much of a high standard, the script seemed playable and astute, and the design elements looked nice; and yet, somewhere in the throwing together of all this quality, it felt like the whole hadn't quite gelled – as least not in a way to which I could particularly relate. 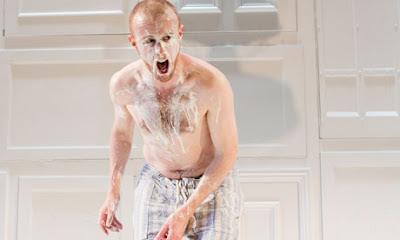 [edit: I should self-parodically and pedantically add that the pronunciation of German names throughout was shocking]
Posted by Andrew Haydon at 23:12