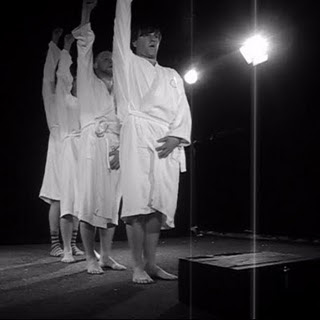 If part of the job of the theatre critic is to explain the context of work (or at least their perception of a work’s context) to their readers, then in one’s own country, this is pretty standard stuff. Indeed, familiarity with current climates and forms of work is the backbone of one’s practice.

Watching work from another country is more complex. Doubly so in the context of seeing national work at an international festival. Does the work’s inclusion point to it symbolising a particular apex of a national form, or is it, even in the context of its home country, unusual work which has been selected for that very reason?

It doesn’t help that Cabaret Rhizome’s Muki Munad (or Muki’s Balls in English – Muki being the most popular Estonian name for a dog and “balls” carrying the same full set of connotations as it does in English from “courage” through “nonsense” to “testicles”) has to be one of the oddest things you’re likely to see in any language for quite a while.

It’s a kind of physical comedy show about the end of mankind, as enacted by four guys in white dressing gowns, one guy dressed as a dog and a fairly sizeable white rooster bathed in red light.

Beyond post-Python clowning routines revolving around some schtick with hard-boiled eggs, a much-fetishised wig and dress standing in for womankind, and a lot of Sesame Street-style running around and screaming (think: Beaker meets Beckett), it’s very hard to know what the thing’s driving at. Is this simple love of absurdity for absurdity’s sake, or do the stentorian narrative voiceovers – apparently delivered by the aforementioned rooster – signify something more satirical or philosophical?

There seems to be some sort of satire of gender politics or the eternal failure of the sexes to comprehend one another thrown into the mix, but whether this is really meant to be taken seriously or is just a springboard for more mucking about is unclear.

Apparently the company have their own space in Tallinn in which small audiences are sat in comfy sofas and get to watch the entertainment as if in the comfort of their own living room. Perhaps this is the most significant missing bit of context. Seeing it while crammed past capacity into a Very, Very Hot Room and sandwiched between other shows with barely time to draw breath, perhaps some of the necessary relaxation of the original article is lost.

Nevertheless, it’s testament to something about that show that one leaves such conditions in a slightly better mood, if not, perhaps, much wiser.
Posted by Andrew Haydon at 15:18