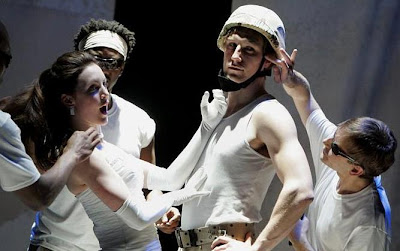 Troilus and Cressida was long held to be one of Shakespeare’s ‘problem plays’. Morally ambiguous, lacking a definitively tragic or happy resolution, with fractured narratives and no clear heroes or villains, it has recently been resuscitated as one of Shakespeare’s most contemporary dramas. Sadly, none of this matters a jot if you make a complete pig’s ear of staging it, which is precisely what Declan Donnellan’s new production does.

Played in traverse on the stage of the Barbican’s main theatre, the space runs front to back with the audience raked up into the wings. Nick Omerod’s set cunningly suggests the Greek tents at one end and the sheer walls and towers of Troy at the other, with five continuous strips of distressed off-white cloth forming catwalk-like runways in between the two camps. These catwalks are not pure coincidence, since much of the rest of the thinking behind the production seems to be heavily concerned with ideas of glamour and self-display. Indeed, the whole of the Trojan war seems reduced to a fight between a Vauxhall gay S&M club and an Abercrombie and Fitch advert. The Trojans are all white vests, khakis and linen jackets, while the Greeks wear black combats, leather, and the occasional SS-style uniform. While Paris and Helen pose for Hello!- style photoshoots like a classical Posh and Becks (see above), the venomously bitter Greek Thersities is reduced to a mildly catty drag-queen.

None of this need matter, of course. Shakespeare is robust enough to withstand a few dim design ideas. What the play cannot take is virtually inaudible dialogue and characters who display no sign that anything that they are doing matters to them in the slightest.

Yes, Cressida is one of Shakespeare's most difficult female protagonists, with her vows of fidelity to Troilus undone almost immediately when she returns to the Greek camp under the protection of Diomedes with an eye to self preservation. And, of course, a perfectly plausible response to this is to play her as a Bridget Jonesy Sloane where knowingness becomes ditsy indecision and horrifically painful self-preservation causes little more than a bit of a frown and a pout, but it does make it fiercesome difficult for the audience to see what all the fuss is about.

That said, when faced with a Troilus whose overwhelming love looks like a high-school crush that has got him in a bit of a tizz, her underwhelming emotional response starts to look somewhat overwrought in the circumstances. Alex Waldmann (a fine actor in other circumstances) seems to have been asked to be as brattish and unlikeable as possible; at once preening and totally lacking any sexual charisma, Troilus's devotion is sold down the river here as laughable naïvety rather than tragic irony.

There are a couple of scenes that work well. When Troilus and Cressida wake after their night together and then learn that they are to be separated, within the world of the play their joy turned to anguish comes across convincingly enough. While elsewhere, the scene in which Thersities rails against both Greek and Trojan heroes is re-made as a nicely handled cabaret act. However, while this looks and sounds perfectly clever and nice, it licences all the comments he makes, turning a stream of real bile into toothless entertainment.

Similarly, Ulysses's excoriation of the Grecian generals in his speech on degree (“Troy in our weakness stands, not in her strength.”) is delivered as an accountant's lecture. It is as if Donnellan had deliberately set out to strip the play of any potential for passion whatsoever. Add to this the funereal pace of the dialogue and the erratic staging that sees characters flung to all corners leaving the centre of the stage empty for whole scenes at a time - making observing the drama something like watching a tennis match - and you have the perfect recipe for a purgatorial three and a half hours.
Posted by Andrew Haydon at 11:24

The FT rewrote one of my lines in fear of its international readership. I wrote: 'The warlords of both sides then begin waltzing together, which again may say something about masculine martial camaraderie but strikes me as a little *too* "Greek" in the circumstances.' This got changed to "too camp", alas.

Interesting. Although in the context of the Shakespeare, like with Marlowe's Edward II and S's own R. II, isn't the homosexuality rather more problematised in the Greek camp?

I didn't subscribe for a moment to Billington's view that Ulysses is meant to be repressedly lusting after Troilus (it looked like he was just trying to stop him starting a fight, not having a closeted touch-up). The Greeks seem to take pretty great exception to Achilles and Patroclus in T&C, don't they? Irrespective of historical Greek practices and Elizabethan hypocrisy, aren't the Greeks here meant to be Pretty Straight Guys with Ulysses being a heterosexually unfaithful husband (The Odyssey) and Menelaus pretty keen to get his wife back. While Agamemnon's rape of Cassandra is pretty much his undoing elsewhere.

Think Donnellan's classical education rather got the better of him at the expense of the play here.

Totally agree. I may have my cloth-eared moments, but this was ridiculous. Not content with covering the stage with canvas, they also seemed to be speaking to it, and what I could hear of the first half sounded like they were struggling with the language.

It seemed to me that there was a deliberate choice to show everyone at their worst (except Thersites, who is almost charming), far more than is called for in the text. Doing this to characters so well known and loved in the wider literature of the Trojan wars is a dangerous move, but might have worked if the production had had other strengths. A couple of good set-pieces do not compensate, and the epilogue was totally inaudible, making the whole thing pointless.

Sorry to go on, the more I think about it, the worse it gets! I actually wrote to the Barbican about the sound problems.