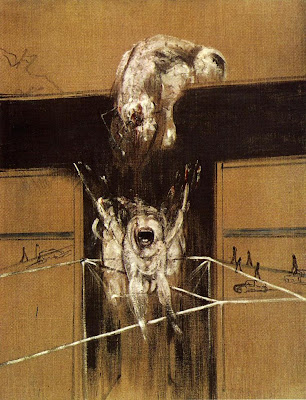 What a vile month it’s been, though: the continual dark grey weather, virtually no plays opening for the first two weeks, and the ongoing miserable story of the Arts Council cuts dominating theatre news, providing another launch pad for the depressing ongoing argument between writers and, um, different sorts of writers, and devisers. Beyond that, in the real world, the nigh-on apocalyptic reporting on the state of the global economy has hardly made for cheery reading either.

Well, the month is now nearly over, and it’s time to buck up. The latest round of blog posts and new controversies (step forward Neil LaBute) have lifted everyone’s spirits, and normal service looks like it is slowly being resumed.

LaBute’s recent outburst seems like a good place to start. I have to confess that in spite of the grandstanding and needless belligerence, I quite liked some of the general thrust of the article; not least because it name-checked Wallace Shawn - perhaps the most underrated American playwright I can think of. It is a pity that LaBute, while acknowledging his own shortcomings (“On many levels, I think we playwrights are failing - and again, I include myself in this.”) does little to address them in his latest offering at the Bush.

Far better, though, is the exchange between LaBute and George Hunka - whose work I am increasingly keen to read - under the retaliatory article by Naomi Wallace on the Guardian’s website. What is sad about LaBute’s article is that while it is always nice to have one’s country’s playwright’s praised for “at least giving a shit”, his list of our leading playwrights is virtually exactly the same list that our universities were trotting out over ten years ago when I was an undergraduate, that Michael Billington reiterates at great and passionate length in State of the Nation, and of whose new work the National has just unveiled a virtual Seventies-playwrights nostalgia season. Of course that’s an unfair label. There is no reason to tie Hare, Edgar, Brenton and co. to the specific cultural moment when their talents emerged any more than Ravenhill should still be considered to be In Our Face along with Anthony Neilson when both are making completely distinct work. But it is a pity that LaBute’s list didn’t include, say, Howard Barker, Martin Crimp and Dennis Kelly.

Speaking of Mark Ravenhill, did anyone else hear him talking about My Most Memorable Experience of Soft Cell’s Tainted Love on Radio 4’s Soul Music yesterday lunchtime (not a bad half hour documentary, charting the song’s history from the original Gloria Jones record through to the Coil cover and its appearance in Doctor Who, oddly)? What he said - that he remembers kissing a girl called Sarah Johnson while it was playing at a teenage party - was less interesting than the fact that he popped up at all. Clearly the man is making a bid to become the most public playwright since George Bernard Shaw, and succeeding.

It doesn’t seem to be doing him much good, though. His latest Guardian blog, which for my money raised some pertinent and interesting questions about the extent to which a playwright’s name guarantees a production of their work, more than the actual quality of said work, seemed to be wilfully misconstrued by all those who commented on it.

Similarly, his “putting down my pink pen” piece before Christmas raised some interesting questions for me, especially when considered alongside the frankly worrying comments under Chris Wilkinson’s recent piece, suggesting “Hytner needs to be careful. His version of the National Theatre is becoming increasingly shrill and camp and heterophobic... the kind of thing Binkie Beaumont would have rejected as too screaming sixty years ago” (it is the commenter was making these accusations, not Wilkinson). I realise I’m not in an ideal position to write about Queer Theatre or whether there is such a thing as a distinctly “gay aesthetic”, but as an abstract question, it interests me greatly, and would welcome any pointers on what to read, or discussion on the matter.


I seem to have written mostly about writers in this post, which is odd, since more than half the work I’ve seen in the past week or so has been either movement-based/visual or otherwise devised. Also, interestingly, I have yet to see anything this year much longer than an hour. I’m not complaining, but it does strike me as unusual. If I’m not forced to sit quietly for three hours in a darkened room soon, I’m worried I’ll lose the knack and start fidgeting, texting, and commenting loudly to my neighbour, whenever I’m next faced with some Shakespeare.

In other news, I’m currently reading Greg Giesekam’s new academic tome Staging the Screen to review for Theatre Notebook. As a partial survey of some of the video-projection/multimedia/intermedia (his word, a useful distinction for work which actually incorporates video/film rather than simply playing before a projected background, for example) it looks like being quite interesting, if a little too much like an unreconstructed PhD thesis - more on this as and when.

Finally, during this season of not blogging or going to the theatre, I have been enjoying the myriad delights of YouTube, so I will leave you with a bit of the excellent Monroe Transfer’s video for I Dreamt I Was a Hammer and Everything Was Glass (not the greatest recording of the song - and doesn't get to the great guitar swell in about minute eleven):

Alternatively, for uncomplicated pop fans everywhere, is there anything more fun than this? (the video is unimportant - you should probably listen while reading something else, frankly)

Ah, well, to be fair to Neil, Andrew, that list of British playwrights in his first paragraph (which does include Barker) are those whom he admired when he was in school in the early 1980s -- about the same time I was in school, really (Neil's about a year older than I am) -- and Crimp, Kelly et al. hadn't come on the scene quite yet. Sorry, though, that Wallace hasn't responded to keep the ball rolling in a way.

Arses. That'll teach me to precis articles I read a couple of days ago without checking back.

I guess the misremebering comes from the sudden chronological slippage that takes us from his uni days to contemporary America and then over to modern England where he namechecks some of the same playwrights again.

Yes, well ... something to be said for that. A few things have happened and writers emerged since 1985, and I try to keep up myself. To the extent I can.

At any rate just popping my head round the curtain to say:

Can I lend my voice to the chorus of approval for Wallace Shawn? A brilliant playwright and an understretched actor. (You know, I'm sure, his extraordinary lead performance in Malle's Vanya on 42nd Street -- to my mind, the best piece of theatre-on-film I've ever seen.)

For what it may or may not be worth, the next issue of Total Theatre magazine has a piece in it by me on queer theatre in the light of Mark Ravenhill's comments and the present threat to Queerupnorth and the Drill Hall. (And, I believe, one other important queer-ish space that's chosen not to go public.)

If you can't wait for publication -- and who can ever wait for the next Total Theatre, frankly? -- give me a yell and I'll email it to you.

Anyway. Chin up old stick (or those words rearranged into a well-known phrase or saying of your choice).