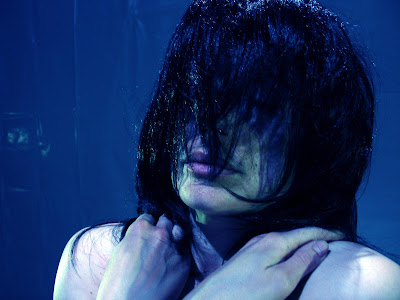 Compagnie Mossoux-Bonte’s Nuit Sur Le Monde is a triptych of pieces: Noli Me Tangere (Don’t Touch Me), Ad Mortem Festinamus (We Rush Towards Death) and Sola Sub Nocte (Alone in the Night). The first part opens with a slow-moving, starkly lit, grey-painted female figure against a similarly grey concrete wall, in a tightly framed doorway of light. The initial visual impression is of a living Banksy graffito. She runs through a sequence of jerky movements and the lights go down. When the lights go back up she has been joined by two near-identical figures in the same frames of light. The three run through a similar sequence of physical patterns and the lights fade once more. This process is repeated with the full six-strong company, before the light boxes fade and the group - while still pressed against the back wall - become a unified tableaux. In many ways, this is the closest you can get to a literal meaning of “performance art”. The way that the daubed performers stay pressed against the wall - their movements virtually two-dimensional - lends the piece the appearance of a gradually mutating, moving painting, or perhaps more accurately a moving Parthenon frieze.

The second of the pieces is faster, livelier and unconstrained by the same spatial stricture. The six performers emerge, one by one, from the right hand side of the stage, clad in white dressing gowns, and cross the stage to exit on the left - walking, stumbling, crawling. Gradually their movements and interactions build up into a near-narrative suggesting negotiations of trust and games of power and domination, conducted to an unremitting soundtrack of white noise and hospital machines - suggestive of the sinister mental health facilities and state torture of Sarah Kane’s work. Just as the patterns start to become familiar the actors are gradually unclothed, and retreat gradually behind the sheet of thick transparent plastic hung across the stage, here their actions resume, but in a more frantic, agonised manner. At times it is suggestive of the closing moments of Salo, albeit without the blood and gore. The final brief piece repeats many of the motifs previously seen, with the performers first on their knees, then standing, all the while bathed in a bright red light.

Aside from a few movements common to each piece, there is very little overt linking of the three pieces. Each has a distinct aesthetic, and different purpose. The harsh painterlyness of Noli Me Tangere makes a stark contrast to the clinical frenzy of Ad Mortem. During the former, one is assailed by a stream of reference points - from the Banksy-like opening moments, through the Bacon-like triptych to the various tableaux of the figures, suggesting various classical and Biblical scenes. Viewing is accompanied by an incessant interior monologue of recognition and speculation. This sense of half-imparted sense makes the audience an active participant in the full realisation of the piece. A similar sense emerges watching the second part. Here, rather than recognising allusions, one is constantly drawing and re-drawing a kind of narrative network of relationships between the six performers. While the whole is not seeking to create a ‘story’ in any traditional sense of the word, there is a sense of progression, of development. The final piece, by contrast, is brief and valedictory - as if the performers are tying up the loose ends and bidding the audience farewell. There is a sense of melancholy about it, as if the conclusion, now reached, is not a wholly happy one.
Posted by Andrew Haydon at 13:43

"Compagnie Mossoux-Bonte’s Nuit Sur Le Monde is a triptych of pieces: Noli Me Tangere (Don’t Touch Me), Ad Mortem Festinamus (We Rush Towards Death) and Sola Sub Nocte (Alone in the Night). "