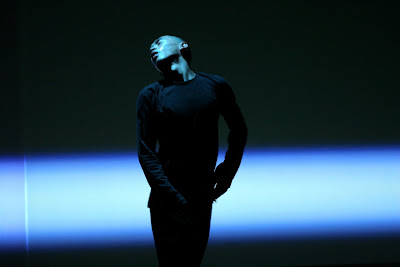 Quite what falls under the remit of the London International Mime Festival these days is an interesting question. It seems pretty safe to say that virtually none of it is “mime”, as the term is generally understood (or was originally meant). The three pieces by Hiroaki Umeda are a case in point; to all intents and purposes this is simply contemporary/modern dance meshed with video art. This presentation is a triple bill of two live dance pieces - Duo and while going to a condition - sandwiching a shorter video piece, Montevideoaki.

The premise of Duo is simple; Umeda stands before a large white screen on the left hand side of the stage. On the right is a slightly pixelated, video-projected twin. As slowly raises his right arm, the projected double raises his. This continues for some time, with Umeda slowly raising and lowering his right then left arm in graceful fluid motions. On the right hand side of the screen we see the movements mirrored, albeit with short bursts of signal interference. Each such instance is accompanied by a moment of white noise. After a set cycle, the form of the interference alters, along with the white noise sound which accompanies it - variously we see the doppelganger digitally flicker, de-tune, explode into pixels, and suddenly become vast on the screen.

Gradually - and, boy, do I mean gradually - these sequences become faster; the white noise starts to create an industrial beat; Umeda’s movements become freer, more dance-like; while the sequence of video effects starts to take on a more frenetic life of their own, with flickers being followed by a suggestion of pixel explosions and sudden size shifts. It’s all very clever, but, as the density of the soundtrack increases and the video effects pile up, it becomes irresistibly reminiscent of a Gap advert, or an Eighties pop video. However, the piece never quite reaches the flat-out meltdown that the build-up suggests; instead it gradually fades away into a section of curiously anodyne lift-music, reminiscent of the muzak played on the Tokyo underground.

The second piece, Montevideoaki, simply presents footage of Mr Umeda busting more of his moves in front of a selection of gritty urban landscapes and tranquil ocean views, along with another thumping industrial soundtrack. The video is played on both screens, with the left showing a mirror image of the right. With the live element removed, the whole enterprise moves a step closer to MTV territory. Not that there’s anything wrong with MTV, per se, but the piece as a whole is oddly suggestive of Justin Timberlake crossed with Ian Curtis dancing in a Nine Inch Nails video. Presenting a video as a discrete component of an otherwise ‘live’ performance also raises some interesting questions about the nature of the event.

The final piece of the three operates along similar lines to the first, with a painfully slow build-up of tiny movements incrementally resolving themselves into a complex dance pattern. Meanwhile, in the background, the screens show a sequence of punishingly bright, strobing black and white geometric shapes. This last piece also features the single most arresting moment of the hour-long show: a retina-scorching minute of intense strobe-lighting flashing directly into the audience’s eyes, silhouetting Umeda against the rapidly pulsing bright white glare.

In terms of meaning, Hiroaki Umeda’s programme notes insist: “What I want is to transmit sensations, rather than messages, to the audience. Therefore there are no conceptual themes in my shows, which I empty of everything that might constitute a meaning.” It’s a lofty claim, and one on which I’m not sure he fully delivers. Umeda might have tried to divest his work of “meaning” but it remains pregnant with potential meanings, and is enormously “readable” or suggestive - particularly on ideas of urban alienation effected by technology - whether he intends it to be so or not.
Posted by Andrew Haydon at 13:46