The Ugly One - Royal Court Upstairs

There seems to be a growing fashion for brevity in theatre. Marius von Mayenburg’s new play, which opens the Royal Court’s new season of international writing, clocks in at around 55 minutes. It is a model of concision with not an ounce of fat to be found anywhere in the script. Ramin Gray’s production sets the action on a bare stage flanked by three of the Theatre Upstairs’ leather and burlap benches, artfully littered with backstage detritus – here a step ladder, there a power-drill - all scattered as if left by some recalcitrant stage crew who are yet to make good on their promise of a set. The space’s house lights are left on throughout the action, supplemented by rudimentary additional lighting on the stage.

The play itself is much concerned with appearances: Lette (Michael Gould) is a successful engineer who has designed a new sort of plug. He should be going to a conference to deliver a paper on the product, but his boss, Scheffler, informs him that his face is “unacceptable” and that his colleague Karlmann will be doing the presentation. Lette is surprised. He’d never realised. He goes home to his wife, Fanny. She confirms that he is indeed “unspeakably ugly”. He is perturbed. He goes to a plastic surgeon – also called Scheffler – and demands reconstructive surgery. The effects of the surgery and their subsequent effects should probably remain a surprise. Suffice it to say that the surgery has a profound effect on the quality of Lette’s life, and the play becomes a fascinating meditation of the effects of one’s appearance – like four or five different morality parables running in tandem.

One of the most appealing aspects of the production is the almost rehearsed-reading style employed. The four actors are costumed only insofar as they wear shirts appropriate to their characters. There are no props. They spend quite a bit of time sitting ranged on the benches while Lette whizzes between them on a wheeled office chair. The delivery and dialogue, while not exactly deadpan, is understated and rapid. Thanks to the wholesale binning of any pretence at “realism” the actors switch characters in an instant. Aside from Gould, the other three actors - Mark Lockyer (Scheffler), Frank McCusker (Karlmann) and Amanda Drew (Fanny) – each play another couple of characters, who in each case have the same name. If this sounds like a recipe for total confusion, von Mayenburg’s script deals deftly with any such worries, using the sudden flicking between scenes as a clever device to jolt the audience like a train going over a set of points. Gray has assembled a first-rate cast who are a pleasure to watch. Gould – who ironically has a lovely, watchable face – manages to suggest changes of a man’s whole temperament with the barest hints of a smile here, a frown there, the terrifically enjoyable Mark Lockyer turns in a series of very funny studies of the self-satisfied, while the intangible transformations which Amanda Drew uses to essay the difference between a foxy housewife and a 78-year-old nymphomaniac plutocrat are quite astonishing.

If the play has a weak point, then one could point to a slightly unconvincing “madness”/split-personality scene, but this is passed over so quickly that it should scarcely be allowed to matter. It weakens von Mayenburg’s thesis slightly – if a thesis is intended – concerning the meaning of the face, but generally speaking the play puts forward only interesting and occasionally provocative ideas at such a break-neck pace that it becomes difficult to even process them, let alone dwell on the ideas raised.

It might seem premature to bracket this, along with Mike Bartlett’s recent Royal Court hit My Child, as part of a new movement in playwriting which has learnt lessons from the best recent television – hour-long shows, plunging the audience straight into the action without lengthy set-ups, rapid cutting between scenes – and re-made it as a thoroughly theatrical medium that adds the positive virtue of unapologetic presence and liveness. This production’s glorious lack of even costume, lighting, sound or set changes underlines such an approach – reasserting theatre’s potential for immediacy. 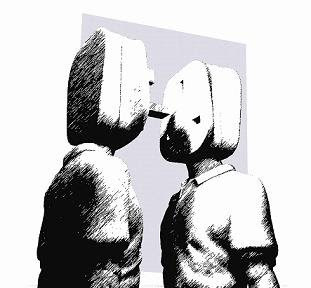 Incidentally, does anyone know anything about the poster design (above)? It is credited to Jeremy Herbert, but really reminds me of some (I think) 1930s, (I think) German surrealist art. Either way, I like it an awful lot.
Posted by Andrew Haydon at 16:55

I began my FT review by noting: "For some 12 or 13 years now - this is neither an exaggeration nor a joke - I have been almost entirely unable to bear seeing my own image, whether reflected or photographic. (The picture which sometimes appears by my name on this page is out of date.) I do not know whether that makes me more qualified, or less, to comment on Marius von Mayenburg's play about the commodification of image." I even suggested that it might be better if my colleague Sarah Hemming went to review it instead of me. The arts editor has told me that those opening comments have been cut for publication, because we're none of us absolutely happy with the way we look. So much for putting things clearly and explicitly.

Wouldn't that brevity likely have more to do with the modern tradition of German playwrighting, maybe inflected through contemporary UK writing (through Buchner, Wedekind, von Horvath, Kroetz and then through Kane etc) than with television? Just asking...

I can't bear photos of myself either, Ian. But at least I get to wear a mask when I go out of the house. Make-up, if you're wondering.

Oh, I've worn a full-body mask for years; it's now got to around 200 lb of excess weight.

Yes, that cover image does look like the kind of thing John Heartfield would have photomontaged in the '30s, doesn't it? But the actual format of the plug & socket gives the lie to such a theory :-)

Alison, my knowledge of contemporary German playwriting (indeed most German playwriting) is tragically sparse. It may well be that this explains a lot. I know Mike Bartlett's stuff is at least in part to do with learning from TV because I did an interview with him back in May for TheatreVoice (linked in review). I also happened to see The Ugly One with him on Monday, causing me to make the connection more readily as Mike was so enthusiastic about the play, and it struck me as significant.

Re: length - I can guarantee you that there is an hour-and-a-half/two-hour student production of this play out there waiting to happen. All they need to do is stick in some pauses and scene & costume changes and all that usual rubbish and it'll be feature length before you can say, well, "don't"...

Enjoyed reading your review of The Ugly One despite not being credited with the (anti-) design that you seem to have appreciated, and then finding the attribution of the publicity image under question!
Good thing my sense of Self is pretty robust (at least, it was).
What about the lighting and sound designers? Don't they also merit a mention? They should get an award for restraint.
What happened to the idea of 'total theatre'? Does design have to be 'in yer face' in order to be seen as integral to the process? A good bit of theatre like this is collaborative.

Rant over.
To answer your question about the image; it came out of my head and is original, as far as I know. Perhaps I have a derivative Unconscious?
If anything it's slightly reminiscent of Topor.I'm flattered that you like it.

Jeremy, I feel rather apologetic now. You're quite right, designers (plus lighting designers and sound designers) don't get credited nearly often enough in reviews.

You're also right that flashy design probably gets namecheck more often than subtle and/or understated work. To explain, if not excuse - such was the design of The Ugly One, which as you rightly point out, I liked a great deal - that it (stupidly) didn't strike me as 'designed'. It's like the perenial directors' complaint - if it works, the actors get the credit, and if it doesn't the director gets all the blame. Good design often goes unnoticed precisely *because* it is good. Like I say, not much of an excuse. It's good to be hauled up on these things once in a while.

And apologies for implying that the publicity image was derivative. And I will definitely get in touch with the Theatre if prints are in the offing.

Thank you for commenting. Here's to my being more rigorous in my noticing of designers' work in future.

That told you, Mr. Hayden. Bet you weren't expecting the designer to come here and give you a bit of stick. Love it.

No, it was wholly unexpected and most welcome. And it's Haydon, not Hayden.

Getting back to the design, it really is in the same league as something Topor did. Often I can barely get my head round Topor's pieces, but they fascinate me anyway. The same effect was had when I saw the poster of The Ugly One.