Following my recent post about the miserable state of the West End, it is only natural that my concerns should be eloquently minced by the newly refurbished Gielgud. Not only was the production quite excellent (although transferred from the subsidised Chichester Theatre), but the theatre functioned well, was comfortable and even had a sensible number of toilets.

Walking down Shaftsbury Avenue I also noticed that the next big play to open is a revival of David Mamet’s much admired Glengarry Glen Ross starring, coincidentally given the recent bus trip, Jonathan Pryce. Shamefully, I’ve never seen the play (having missed Raf Kinston’s near-legendary Cambridge production starring, among others, the director and cute Guardian blogger Chris Wilkinson and the quite indecently talented Khalid Abdalla), I’m very much looking forward to getting the chance.

More surprising is the news that following its revival of The Country Wife - itself a pretty bold move for a West End theatre - The Haymarket, under the new artistic directorship of Jonathan Kent, has programmed Edward Bond’s The Sea for the new year. If restoration comedies are “bold”, then Edward Bond is little short of “courageous” - in the sense used by Sir Humphry to imply suicidal. But it is an exciting decision. I mean, this is a play that was a set text at Leeds when I studied Eng. Lit. there, which essentially means is that it must be a classic of modern hard left writing. Bond’s plays are about as far removed from a sop to the money-men as you can imagine. Where will it end? Blasted?

Yes, it still has a big name casting (Eileen Atkins), but she’s hardly “celebrity”. She’s an actor who is well known thanks to a long and distinguished career. It is important to distinguish between the two. By the very nature of their work, actors who do well will become well known. It’s very different to someone well known for their part in a reality TV series (not the audition ones) or sex scandal being given acting jobs.

Speaking of which - sort of - I’d like to write something on the subject of The Secret Diary of a Call Girl which, to judge by the papers, seems to be the only drama in the world at the moment. Sadly, not having access to ITV2, and being at Macbeth on Thursday, and knowing the writer well enough to make liking it potentially suspect or disliking it awkward, I can’t*. As a result, I have no idea whether or not it glamorises prostitution, if it will lead hundreds of girls into lives of vice, or if it will have a disastrous impact on house prices. What I do know is that having been successfully published and sold the rights to telly, our anonymous, eponymous heroine has turned her back on her former profession. Draw your own conclusions.

*Edit: I've now watched two episodes for a Guardian piece suggested by the series and its coverage.


Who calls me coward?

Elsewhere on the net, my sometime colleague on Culture Clash, the Sunday Times drama critic Peter Whittle - who, I should warn lefties of a sensitive disposition, is quite right-wing - has written an interesting J’accuse on the subject of our theatrical establishment’s failure to stage a stringent attack on Islamist fundamentalism. Irrespective of what you might think of Peter’s politics, it is an interesting question. If theatre is to be usefully political - and I imagine a majority of Postcards readers, at least in part, think it should be - is this a failure? Or has this already been started? I didn’t see Jihad the Musical in Edinburgh this year, but from what I read, it sounded like a pretty serious stab at attacking Islamist terrorism with satire. That said, I can’t think of many upcoming London openings likely to provoke a riot in the near future. Perhaps the Finborough’s new Thatcher play Little Madam will provoke a bit of grumbling in the Tory press, certainly Jack Thorne’s play Stacey (transferring to the Trafalgar Studios in a new production starring Ralf Little, playing in a double bill with Thorne’s Fanny and Faggot) raises some uncomfortable ideas and, yes, Theatre 503’s astonishingly bang-up-to-the-minute Final Shot dramatises a fascinating, contentious and still-raw ethical issue - but no one is going to be throwing bricks over them. Yes, we have a remarkable culture of intelligent playwriting at the moment, but should it be doing more? I wonder if the most contentious forthcoming event might not prove to be the National’s planned season of Israeli plays, if the recent boycott of Israeli academics by British lecturers is anything to go by.

On the subject of controversy, does anyone else find the Almeida’s decision to stage a revival of Cloud Nine just a little bit baffling? Don’t get me wrong, I am quite a big fan of the play in many ways - certainly as an historic moment, and as a nicely playful, theatrical piece of theatre. But surely its arguments are pretty much won now. Without wishing to get embroiled in an argument about exactly how much more liberal things are now than they were thirty years ago - even if only in terms of legislation and the noises the government makes - surely a play saying that it’s ok to be gay and that Imperialism wasn’t maybe so great isn’t breaking much ground. Particularly in Islington. But then, just because its original function could be seen to have been served, is that any reason to consign it to the dustbin of history? Having said that, when I was doing a bit of classroom assisting at a North London comprehensive back in 2001, we were doing a production of Cloud Nine with the lower sixth drama group. At some point, the idiotic woman teaching this class did actually explain to me they had tried to cut the bits about homosexuality from the script because of Section 28. I don’t think I’ve ever been more gob-smacked. Not least because Section 28 had been repealed four years earlier in one of New Labour’s first moves on gaining power. But on what planet can you cut “the gay bits” out of Cloud Nine and still have a play? And more to the point, why on earth would you want to? Suffice it to say, things got rather frosty after that conversation. Maybe, sadly, we do still need to hear what Cloud Nine has to say. But then, like the brain-washing leftie I secretly am, I fear the people who most “need” to hear it probably won’t be rushing to book tickets.

Get this! Clearly the days of critics and bloggers alike are numbered - while we’ve all been rearranging the deckchairs the cartoonists have stolen a march on us.

There can only one reply - comic cartoons drawn by poets* 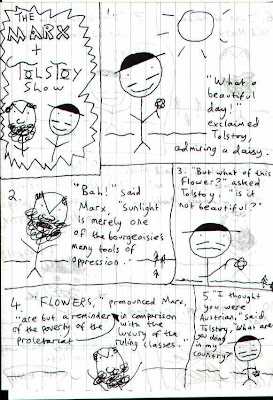 *Cartoon by the excellent Forward Prize-nominated poet Luke Kennard, lifted from the website for the sketch comedy group/theatre company Pegabovine, of which he is roughly one quarter (unless it's by Tom, in which case I'm very sorry and will amend this a.s.a.p.).
Posted by Andrew Haydon at 00:10

And I'm not sure what you mean by "usefully political". Surely when utility becomes one of the criteria of art, then it stops being art. Art can be useful, but when it becomes part of the aim, then it is art that becomes the by-product rather than usefulness.

But I see too that that can be used to justify a kind of artistic hermeticism which is ultimately damaging to art itself and to its place in the cultural discourse - cf. the ascendancy of conceptualism in the visual/plastic fields.

For what it's worth, I'm pretty sure this Cloud Nine is a remount of the production seen in Sheffield a few years ago. If so, it's well worth seeing whether or not its politics are urgent. Anyway, everyone seems very excited about Macbeth and it's a long time since usurpation was a pressing issue.

"But surely its arguments are pretty much won now."

Not exactly... for a start the play has more to say than "gay stuff is good" and "imperialism is bad"*.

As much as it is about either of those things (or about anything to come back to one of your previous posts) it is about the place afforded to women in a patriachal society and I'm absolutely sure you are not one of these men who is happy to proclaim "we live in an era of post-feminism" while ignoring the pay gap that still exists between men and women and, oh I don't know, the fact that our three leading political parties are all run by middle-class white men.

Thanks to Churchill's rich allegorical style and the glorious scope of the play (tying homosexuality, feminism and post-colonialism together as part of an assault that is on history and tradition as much as it is on any specific political target, its actually has aged vastly better than any of the toss that David Hare were throwing together at the time.

I'd rather see a thousand productions of it that any narrow, agenda-driven piece of anti-islamist agit-prop.

*and while Catholic Bishops happily still call homosexuality disease and the US are considering setting up a permanent military base in the liberated iraq I dont if those two are quite as polished off as you assume.

Read that back and not only does it sound breathless and irritable (which is possibly the house style at The Arcades Project these days...) but bristling with errors... appologies. hope you can still figure it out.

No, you're right, that is Luke's cartoon.

Incidentally - WILKO is a Guardian blogger as well? I'm very much looking forward to the rest of the Noises Off staff getting Guardian blogs too. I can't wait for Joe Benjamin's.

False premise or not, some of the other things that it brings up - the general atmosphere of being a bit careful for fear of death-threats and the like (I'd think twice about making a similar comment on the Guardian site which uses my picture, for example) - are quite pertinent.

And Andy, yes, of course I'd rather see "rich allegorical style and glorious scope" than "narrow, agenda-driven agit-prop" (in nearly all cases imaginable, really) but then we could hope that a play emerges which addresses the issues mentioned without sacrificing its theatricality. A kind of Attempts on Abu Hamza's Life, kind of thing - albeit not the same sort as the CIA might be tempted to make.

Incidentally, mea culpa - I hadn't clocked the National's new Kwame play when doing my forthcoming controversies round-up, although I guess it's a couple of months off yet.