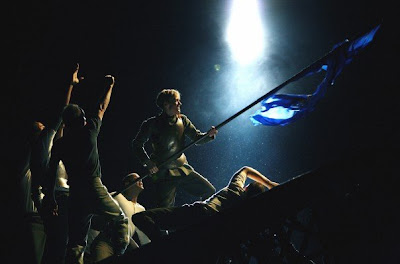 George Bernard Shaw has somehow acquired a reputation for being fiercely boring. This could in part be down to Michael Billington’s almost ceaseless lionising of the man as one of Britain’s Greatest Ever Playwrights. After a while the record starts to sound a little broken, and the plays still aren’t getting any younger. They’re not getting any shorter, either. Even this new yoof-friendly, £10-ticket version at the National Theatre comes it at around three hours including interval. So, given the National’s apparent obligation to stage some Shaw, if only to stop Billington moaning, what to do? Hytner and Co.’s solution is probably about as neat a reply as you’re likely to get. They chosen one of Shaw’s history plays - useful as it is not so much mired in minute Edwardian detail and arguments about a century-old status quo - and given it to one of the most robust, inspired directors currently working in mainstream theatre. On top of that they’ve chucked in one of Britain’s favourite actresses - Anne Marie Duff (of Shameless fame) - in the lead role. If that doesn’t attract audiences and please the critics, then Shaw is beyond help.

In terms of style, this is very much in the school of the open-stage, minimal, suggestive design - in this case a charred wooden hydraulic rake set on the Olivier’s revolve, surrounded by blasted trees taken straight from photographs of the Somme. It is perfectly suited to the sort of ensemble playing that Marianne Elliott deploys. Indeed, the battle scenes in St Joan function almost as a standing rebuke to the stage version of Lord of the Rings across the river. Without a single slow-motion sword being crossed the ensemble suggest Joan’s whole campaign across English-held France in a single, continuous assault on the props; smashing chairs against the stage, drumming on metal at its flanks, as the burnt rake gradually rises to become battlefield and city wall. Credit here is also due to Jocelyn Pook’s score, which - far more than functioning as mere background music to scene changes - takes a commanding role in evoking both the battles, but also the heady religious atmosphere crucial to the play’s success. Without some reminder of what God had the potential to mean the play would utterly fail.

It is easy to see the play’s attractions as a candidate for revival in today’s Britain. Elliott does well not to play to the obvious - but ultimately spurious - potential readings of Joan as a religious fundamentalist seeking to liberate her country from an invading foreign power. We are spared the foolishness of seeing Jean d’Arc in Iraqi/Palestinian/Chechnyan fatigues. Annoyingly we are not quite spared all possible commentary since Duff speaks in a broad Irish accent throughout - it could well be her own accent, and, fine, it represents well enough Joan’s position as a peasant girl moving in noble France; it is also more than a little freighted in terms of England’s more recent military occupations.

However, Shaw’s concerns are more wide-reaching. It is salutary to remember that when the play was written, Shaw was almost as close in time to the Napoleonic Wars as we are now to World War One, which had concluded only five years earlier. And it is with this, through the prism of the Hundred Years War, that the play really deals, examining ideas of nationalism in an earlier Europe when France was several kingdoms, and England was ruled by the “French”. The play imagines the anticipation of Protestantism, looking at the need by religious leaders to suppress those whose religious fervour ultimately weaken their own power bases.

To this end, there is no small amount of debate. At its best, it resonates like several Sir Humphries set one against another - dry English understatements meeting with parries by drier, more understated understatements. (Interestingly, this vein of similarity with well-loved characters from British comedy does not stop at Yes, Minister, as the excellent Paul Ready’s Dauphin is, near-as-damnit, played as Frank Spencer). Occasionally the dialogue does lapse hard into portions of an essay divvied out between characters, and when sometimes actors deviate from wryness to passion, the corresponding loss of diction sometimes misplaces the odd minute of dialogue comprehension. But there are plenty more minutes of dialogue to make up for the few that go awol.

Ultimately this is a patchy play. Its curious structure runs something like: debate, debate, fight, debate, debate, moments of searing brutality, debate, surreal epilogue. Some of the debates are thought-provoking, others crucial to the plot. Were it not so well-turned a machine, though, it would be tempting to suggest it be cut by a further half-an-hour for the comfort of all concerned. That said, one’s personal tolerance for endless discourse and Fabian pamphleteering notwithstanding, the point at which it is decided that Joan is to be burnt at the stake is astonishingly powerful.

The short version of this is: I pretty much enjoyed it, but I'm not sure how many other people would.

Edit: Turns out I'm pretty much with the West End Whingers on this one - if noticeably preoccupied by the ideas of the play where they focus on the acting. Good place to go for an account of what Anne Marie Duff's like, though. Rather a weak point of my review.

Edit v2.0: OK, so the critics enjoyed it too. Charles Spencer, Michael Billington, Susannah Clapp.
Posted by Andrew Haydon at 17:11