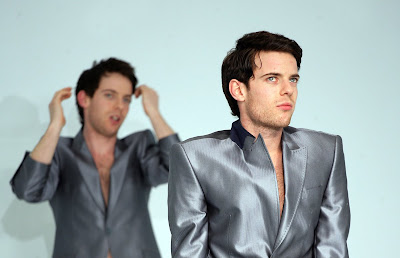 Overall, thanks to its gloriously messy, seductive staging and intelligent script, Over There manages to present a picture of Germany’s ongoing struggles to reconcile the experiences of one people divided by ideology for half a century.
____________________________________----_____Photo by Simon Annand
Posted by Andrew Haydon at 11:14

Yes. I've been amazed that otherwise intelligent reviewers have read the play as arguing that the old DDR was preferable per se - what it argues is that some aspcts of "Ostalgie" are entirely understandable, and that the extent to which the West simply took over the East was deleterious to both individual and collective identities there, rather than anything so crass as "the Stasi were better than Twinkies". To boil so complex a play down to so simple a position... well, it takes some boiling.

Off topic, but this gentleman seems to want to squabble with you and Ian Shuttleworth

Haven't read the reviews yet, as I still want to do my re-writes uncontaminated with irritation.

Thanks for the tip-off. I resent his decision that my response is "knee-jerk". Actually, I thought about it quite a bit before deciding I didn't agree. I think pretty much everything in his final list and wording is very sensible practice, but I'm not convinced that it needs to be put into writing. It's like the signs on the tube saying "don't behave inconsiderately". I wasn't anyway. I didn't need the sign. I just wonder whether - especially in a profession that has survived without one for so long - we suddenly need to formalise good manners and professional conduct. They should be givens anyway, and it's down to editors who they employ, not the IATC.

I couldn't agree with you more. The irony is that David Adams is known for the personal axe that he has to grind in his reviews and the way in which he personalizes issues. Perhaps the code should be his "note to self"? I also happen to think that your criticism is a breath of fresh air - always stimulating, candid and up to the mark. Thanks.

I don't know anything whatsoever about German staging techniques, or East or West Germany really, but I still really enjoyed it!

I totally agree there was something spine tingling about watching real twins being so...er...saucy...with each other. And the writing was just so great to listen to. Brilliant. I am going to go again.

"Over There manages to present a picture of Germany’s ongoing struggles to reconcile the experiences of one people divided by ideology for half a century."

- I'd just like to emphasize that - to my mind (and I am German) - the play had rather the atmosphere of the early nineties when the fall of the wall was still new and no one (especially in the East) knew how things would become... there was a certain "foggy feeling" in the air at that time. I think it changed now and things are becoming more balanced; everyone is moving on. Well, actually I'd only like to indicate that it's to my mind not right to speak of "present struggles".

The script, the stage design, the directing and the performace was a real pleasure! - though it felt strange to be in London as a German, watching an English piece in English about German issues...