It would be premature to compare the Court’s riches with those at the National before I see their German offering and big-multi-culturalism-critique tomorrow, but I don’t think it’s too cynical to remark on an awfully neat synchronicity. Meanwhile, I can only report that the Court tonight felt like pretty much the most vibrant, sought-after culture-spot in town. God help us if there is actually some kind of theatrical renaissance taking place in the midst of this recession going on under our noses; papers will have to lay on more critics... 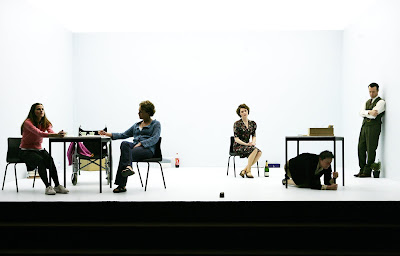 In the past week, the Royal Court has opened three plays which, either overtly or otherwise, have a major world religion at their heart. In reductive terms: Alia Bano’s Shades deals primarily with Islam – specifically Islam as it is lived and experienced by different stripes of British Muslim; Caryl Churchill’s Seven Jewish Children comments on Israeli Jews and indirectly on their Palestinian and Islamic neighbours; meanwhile, at the heart of Marius von Mayenburg’s The Stone is an exploration of Germany’s ongoing attempts to deal with its horrific crimes against the Jews under the Nazis.

Von Mayenburg’s script is a fluid, kaleidoscopic view of sixty years of German history presented in a stark white box. Its six inhabitants – each depicted as if caught at a specific moment in their lives – interact with each other in scenes showing key moments when their lives intersect.

The narrative revolves around the ownership of a particularly desirable residence in a Dresden suburb: Heidrun (Helen Schlesinger) is an early-middle-aged expectant mother in the late-‘70s, Hannah (Loo Brearley) is her daughter in her teens, Witha (pronounced ‘Vita’ – played by a particularly excellent Linda Bassett) is Heidrun’s elderly mother in the ‘90s, whose husband, Wolfgang (Jonathan Cullen), is shown as the middle-aged man who died in 1945. Got that? The remaining two characters are Stephanie, an East German (Amanda Drew) who lived in the house during the DDR-era, when Heidrun and Witha had escaped to the West, and Mieze (Justine Mitchell), one half of the Jewish couple who own of the house from whom Wolfgang and Witha buy the house in 1935, two years after Hitler’s rise to power.

Part of the fascination of the piece lies in the way in which von Mayenburg continually shifts scenes. With no lighting change or warning characters will suddenly be talking to one another twenty years in the past or future, those not present – or even born – suddenly freeze out of the action. Added to this is an unreliable narration at the heart of the story. Our faith in the grandmother’s account of her and her husband’s acquisition of the house and their actions and allegiances during the war is slowly eroded by our encountering scenes in which her version of their past is shown to have falsified crucial information.

Gradually we are shown that what on the surface appeared to be the triumphant, happy return to a family home is in fact a damning indictment of the lies that a nation has told itself in order to remain sane - the opening of the question of how much those lied-to even believe and how much is simply wanting to believe the best. It suggests a Germany where everyone is appalled by Nazi atrocities, and yet where everyone has grandparents of whom they can be proud for standing up to the Nazis. It is a striking, and dramatically astute way of dramatising a nation refusing to take responsibility for its past, and in doing so continuing to inflict damage on itself.

Ramin Gray’s production of this gorgeously fractured text is a masterclass in chilly minimalism. It trusts the audience to pick up on the way in which the piece operates, never once spelling things out, nor resorting to dumb underlining. For my money it could have done with a bit more willingness to disrupt itself. Despite all its postdramatic cool, it still displays an oddly British hermetic-ness. I quite wanted to see more mess, more viscera, more elements from outside the text brought in as a commentary - everyone in the cast suddenly stopping what they were doing and dancing to David Hasslehof singing Looking for Freedom as the Berlin wall was pulled down, or something. That said, what is there is beautifully realised – recalling Katie Mitchell’s The City seen at the Court last year. This is a terrifically intelligent play, beautifully presented, with an outstanding cast. It is a continuing pleasure that the Court is prepared to commit to main stage productions of international work of this calibre, and that there is an audience out there for such work. Long may it continue.
Posted by Andrew Haydon at 05:40