Burnt by the Sun - National Theatre 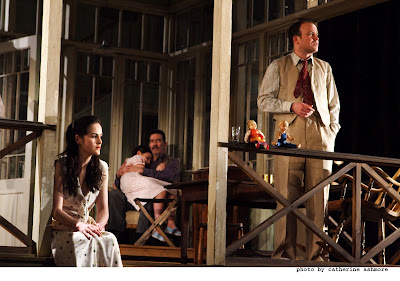 It is surprising to learn that Burnt by the Sun is an adaptation of a relatively recent Russian film. Peter Flannery’s version feels completely at home on stage. Indeed it plays like an exceptionally well made play in the Chekhov/Ibsen mould.

Set in 1936, in a village 22 miles west of Moscow, the piece takes us into the bustling home of Kotov (Ciarán Hinds) and Maroussia (Michelle Dockery), filled with Maroussia’s aging extended family and their friends and hangers-on. These bourgeois, pre-revolutionary relics seem to be very much the dominant force in the house until two tank drivers parked in a field arrive and start throwing causing trouble. When they recognise Kotov, become paralysed with fear. Kotov, it turns out, rather than just being a lunkish, lumpenproletarian husband is also a very high ranking-Soviet general and one who knows comrade Stalin’s home phone number. There is suddenly no question about how this power-dynamic works, it is about those in charge exercising power of life and death over everyone beneath them.

While well acted and prettily staged, one spends the first twenty minutes gearing up for a somewhat slow evening. Then Rory Kinnear (Mitia) turns up and suddenly the whole thing springs to life. It’s not just that Kinnear is one of the most charismatic actors working today, its also that the dynamic in the house suddenly makes sense, the one really vital bit of conflict is suddenly in place. It is obvious from the start that Maroussia’s relationship with Kotov can be strained, but it is her reaction to Mitia where the play ignites. Pretty much their whole 12-year back-story can be read from the way she suddenly goes rigid and his bonhomie suddenly turns forced and tense. And then there’s Kotov, with power of life and death standing in the corner silently observing all this, complete with Stalin moustache; the very image of Uncle Joe himself.

If you’re going to do one of those mixing the personal and the political plays, this is pretty much an object lesson in how to do it right. The people are likeable and morally complex, their stories are interesting and draw you in, while the political-historical backdrop has a convincing bearing on the situation that never feels contrived. And then, just when you think you know where it’s going, the play delivers a perfect, bitter twist.

Howard Davies staging is workmanlike, while thanks to Vick Mortimer’s, admittedly beautifully rendered, Russian dacha set – complete with roof, ceilings and a covered balcony – the lighting is oddly, and sometimes annoyingly impressionist as it is forced to come mostly from the sides making the whle thing look a bit more formalist than may have been intended. While his staging may lack for sparkle, Davies’s direction of his actors is superb.

As an examination of the way in which terror operates and how individuals will submerge themselves in a collective to avoid responsibility for their own actions it is quite outstanding. As an portrayal of how love can destroy lives it is shattering.
Posted by Andrew Haydon at 11:14