Following The Reduced Michael Billington’s recent Finnish exposure, Postcards… is pleased to report that, continuing the British theatrical blogosphere’s internationally extended hand of friendship, it has become the toast of Lithuanian arts coverage, following its recent championing of dancer/choreographer Lora Juodkaitė both here and on the Guardian blog.

Articles about my piece can be found here and here. There was also a printed article. 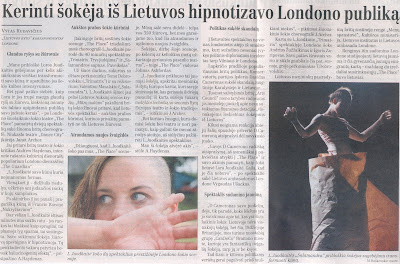 Strangely the above represents the first time since university that any of my writing has appeared in a printed format (other than in Raw Talent). Curious that the writing appears in a country I have never visited, in a language that I don’t speak. I’m sure Tynan started out exactly the same way, though. It’s even more strange to have one’s name translated. For the first time I get an inkling how odd Germans must find it that the English have changed the names of all their major cities into, well, English. Whose idea was that, anyway?

While we’re on European Internationalism, Ian Herbert’s report on the recent Belgrade Festival - to be found underneath Ian Shuttleworth’s, acute as always, round-up of the latest London critics from the op-ed pages of Theatre Record - is well worth a read. It also provides a link to this theatre magazine which here reprints the text of a new Serbian play in English. I note this as much for myself as for you as I haven’t yet had a chance to read it. Elsewhere, I heartily recommend Anna Teuwen’s lovely review of the first show for children she has seen without hating it.

In other news, I now appear to be a “real” journalist. Worryingly, the site also has a rudimentary word-search feature which paints a rough picture of one’s output:

“Andrew Haydon” it notes, “has written...
More about 'Billington' than anything else
A lot about 'Shakespeare' in the last month
Fewer bylined articles than the average journalist”

At some point I really am going to have to confront this Oedipal obsession with the gigantic Laius-like figure of Michael B. I mean, does anyone obsess like this about Charles Spencer?

The thing goes on:

Obviously this isn’t wholly accurate - “even head”? - and is culled from only a few of my Guardian pieces. That said, I am still interested, and slightly disturbed, by the way that Britain, British and Cambridge all crop up as regular tics. That sounds all too plausible, and is probably something I should watch. So, for the next month, I shall try to avoid all such mentions. As I manifestly haven’t managed to do in my most recent Guardian Blog piece.

The theatrical blogsophere seems to be going through a period of ineffable good sense at the moment. Bye and Field both continue frighteningly prolific in their output, while Lyn Gardner’s posts on the Guardian blog are in danger of talking such sense that the whole comment business will soon be rendered unnecessary - assuming everyone listens to her, that is. Meanwhile, Chris Goode has posted what he thinks might be his last theatre-related post of the year, and it seems that holiday season is starting to kick in. Well, after my rather annoyingly-longer-than-planned hiatus, I’m hoping to be writing far more regularly again now, so no holidays here, in spite of the fact that almost all the years openings are done and dusted, save for innumerable pantomimes. Of which, expect more after the weekend.
Posted by Andrew Haydon at 18:03

I guess you probably haven't met my friend Aiste. She's been in LA, darling.

Anyway, she's a Lithuanian playwright who's just started a blog. Check it out: http://www.blogas.lt/d5.